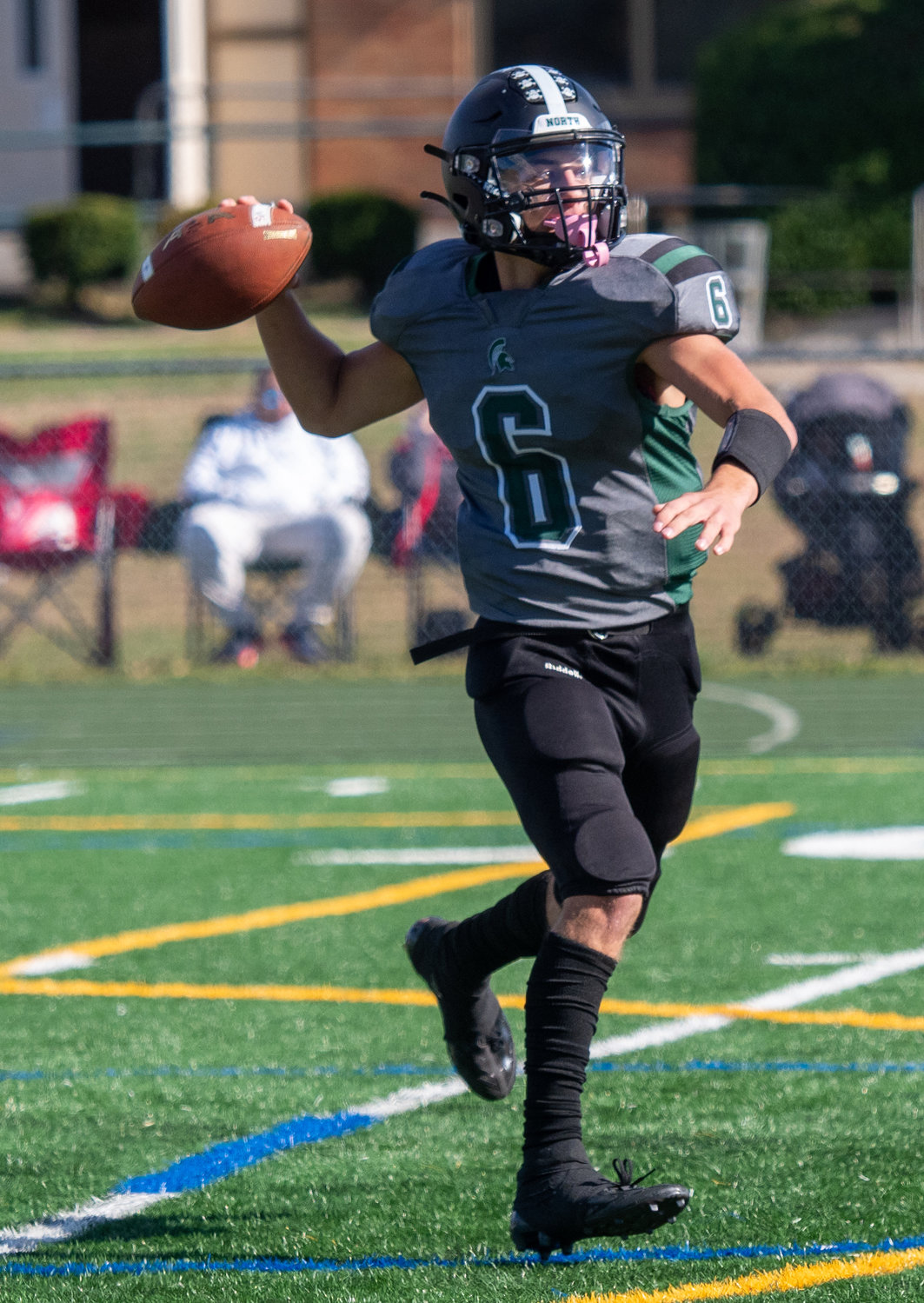 Senior quarterback Nick Naumov had a touchdown run and 156 yards passing as the Spartans improved to 2-3 on the season.
Eric Dunetz/Herald 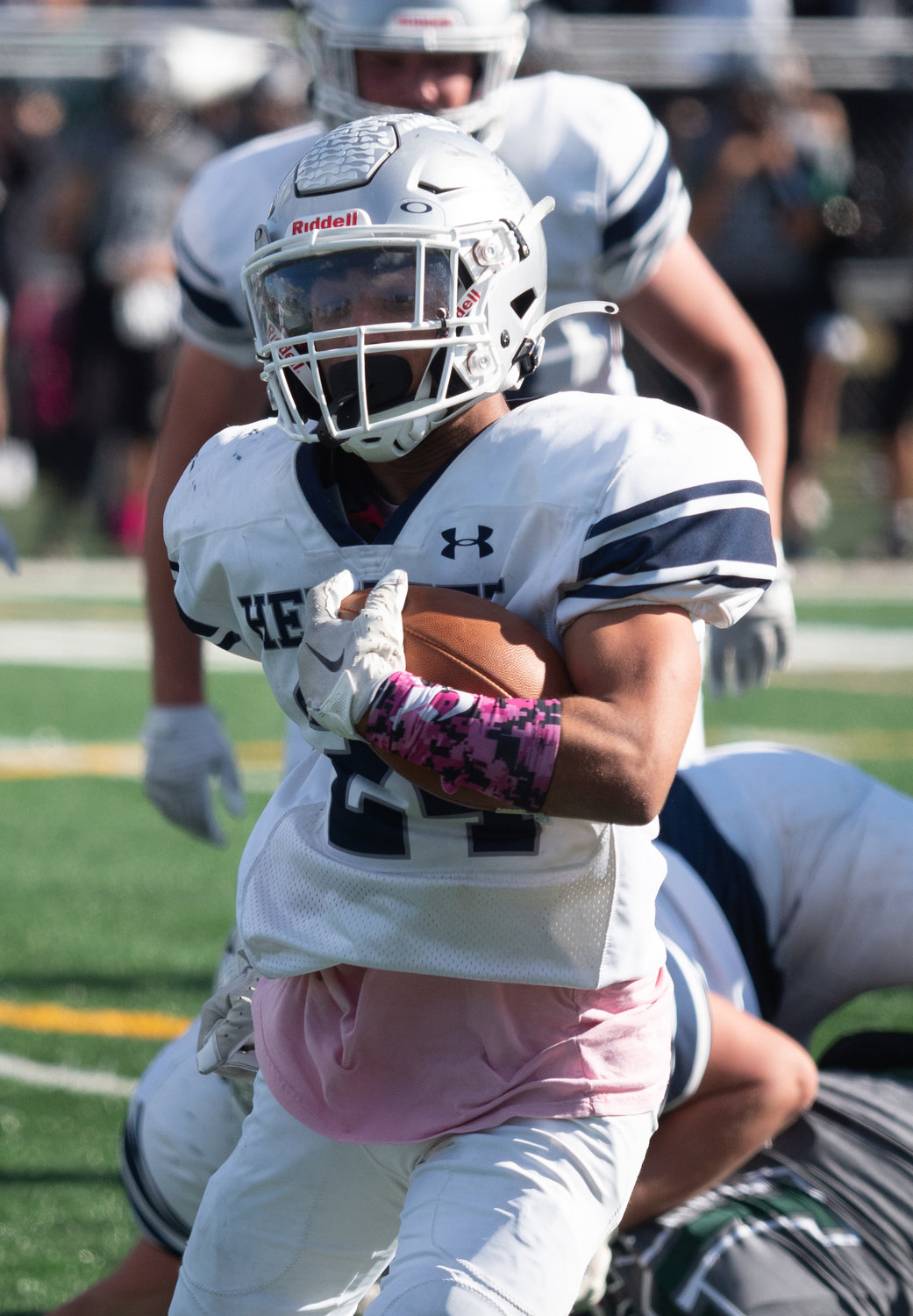 A homecoming date with Hewlett was on the agenda for Valley Stream North last Saturday afternoon with both teams looking to break their respective losing streaks. The Spartans set the tone early and never trailed in the Conference III football contest, resulting in a 27-6 victory to send their fans home happy.

North quarterback Nick Naumov got the scoring started in the opening quarter with a 9-yard touchdown run to cap off a seven play 64 yard drive in which the Spartans faced a 4th-and-1 they converted. The senior captain finished the day completing 10 of 16 passing attempts for 156 yards.

“He’s our best athlete on the team,” VSN head coach Mike Paolillo said of Naumov. “We want the ball in his hands. He’s been running and throwing the ball well.”

Back-to-back false start penalties didn’t seem to faze the Spartans on their first drive of the second quarter as Valley Stream North’s homecoming king, Josh Lopez, had a 1-yard touchdown run to complete a nine-play, 89-yard drive. The senior captain finished with 84 rushing yards on 14 carries. “He is our man,” Paolillo said. “He’s been a three-year starter for me since his sophomore year. He’s doing great things.”

After going down 14-0 with time winding down in the opening half, Hewlett senior captain Ariel Waldman punched home an 8-yard rushing touchdowns to get the Bulldogs on the board. That, too, capped off a nine-play drive and covered 69 yards. Waldman led the team in rushing on the day with 18 carries and 72 yards.

“The offensive-line got it together,” Hewlett head coach John Palladino said. “We were able to give him the ball a few times and we were able to put together a drive.”

Despite two rushing touchdowns in the first half, the ground attack was still an area that Valley Stream North wanted to establish in the second half.

“We like to establish a run game,” Lopez said. “When we ran, we came back in the second half wanting to not get too comfortable.”

The Spartans did just that in the third quarter as Danny Rojas added a 1-yard touchdown to complete a seven-play drive that began at their own 47. The senior running back finished the day with 50 yards on eight carries.

Junior Terry Medor put the finishing touches on the victory as he returned a 40-yard punt for a touchdown with just over a minute to play.

Not much offense in the air was generated by Hewlett (0-5) as it was held to 36 passing yards, but the visitors got strong rushing performances from Waldman and quarterback John Cusumano.

With the win, Valley Stream North improved to 2-3 and will take on Lynbrook next on the road Saturday at 2 p.m. Hewlett has a tall task Friday night when undefeated Plainedge comes to town for a 6 p.m. start.