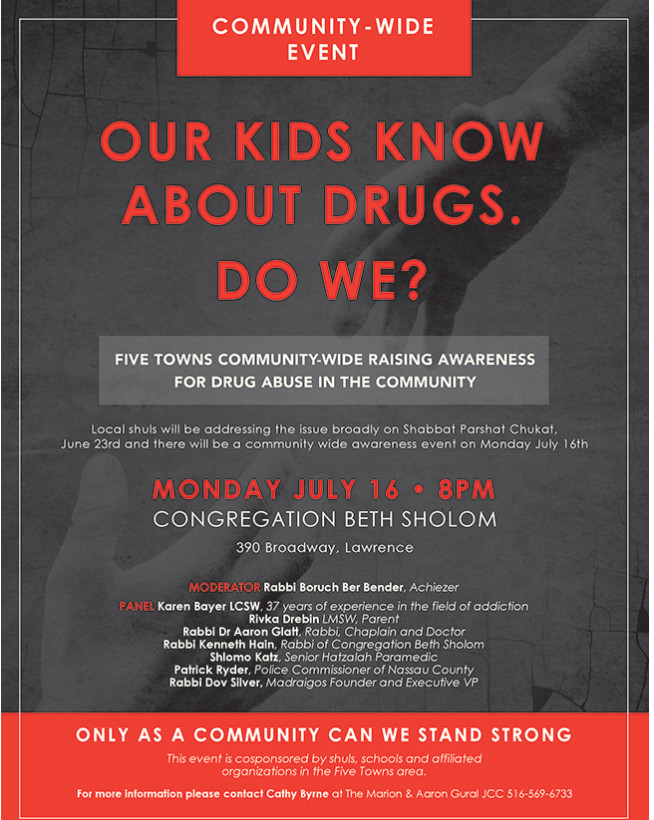 A community drug awareness event is scheduled for July 16 at Congregation Beth Sholom in Lawrence. Organized by the Gural JCC and several other Five Towns organizations and institutions, it is aimed at helping parents understand the issues surrounding substance abuse.
Gural JCC

I became trained to deal with families with drugs because that’s what I was seeing.”
Karen Bayer Panelist
By JEFFREY BESSEN and DENA GERSHKOVICH

The scourge of drug abuse will be the topic of a community event at Congregation Beth Sholom in Lawrence on July 16 at 8 p.m.

A seven-member panel will be moderated by Rabbi Boruch Ber Bender, founder and president of the Achiezer Community Resource Center, a Lawrence-based organization that partners with other groups to help families enduring hardships ranging from illness to financial troubles. The discussion will focus on parents, with a provocative query: “Our kids know about drugs. Do we?”

The Marion & Aaron Gural JCC helped organize the event, with the assistance of several other Five Towns organizations, agencies and rabbis, including Ya’akov Trump, the associate rabbi at Young Israel of Lawrence-Cedarhurst. “This is the start of more programs and services to create a drug-free community and collaborate with other agencies,” said Cathy Byrne, the Gural JCC’s associate executive director for older adults and special needs.

Panelists will include Karen Bayer, a social worker with more than three decades of experience who practices in Lawrence and Manhattan; Rivka Drebin, a master social worker and parent; Rabbi Dr. Aaron Glatt of Woodmere, chairman of the Department of Medicine and Hospital Epidemiologist at South Nassau Communities Hospital in Oceanside; Rabbi Kenneth Hain, the spiritual leader of Congregation Beth Sholom; Shlomo Katz, a paramedic for the volunteer ambulance corps Hatzalah; Nassau County Police Commissioner Patrick Ryder; and Rabbi Dov Silver, founder and executive vice president of the Woodmere-based Madraigos, a nonprofit that offers a variety of services and programs to help teenagers and young adults overcome challenges.

“Unfortunately, substance abuse, alcohol, marijuana and other drugs are a problem,” Glatt said. “We need to make sure that everyone is aware of this.”

A 2015 pilot study of the Jewish population of the U.S. and Canada, conducted by the National Center for Biotechnology Information, part of the U.S. National Library of Medicine in Bethesda, Md., found “that a significant portion of the Jewish community knows someone affected by an addiction and that over 20 percent have a family history of addiction.”

Emphasizing the importance of having resources in Five Towns shuls and recognizing problems at an early stage, Glatt said he planned to discuss drug abuse cases in the community. He added that people should not be embarrassed to attend the forum, because it is an educational opportunity and a step toward preventing future drug abuse. He said he hoped the event would spur further discussion and “prevent anguish.”

Noting that the drug problem cuts across many different communities, Bayer said that it has become more prevalent in recent years, and she believes many people are reluctant to talk about it. “I became trained to deal with families with drugs because that’s what I was seeing,” she said, adding that counseling so many affected families is painful. Bayer planned to discuss what she called “very specific corrective goals” for family members and parents.

Silver said that substance abuse has been complicated by e-cigarettes and other forms of vaping. “We want to educate,” he said. “At these events, you can’t cover all the topics that are needed, but it gets people to talk, to hear. And that’s always a great start.”

Recognizing potential problems early is key to preventing substance abuse, Glatt said. “There are all sources of resources for different sorts of problems . . . ,” he said. “I’ve seen tremendous medical harm that can come from substance abuse. I’ve seen religious harm. [Attending] means you want to make sure there are alternatives.”

Making more people aware that help is available is one of Bayer’s main goals. “Intervention and psychotherapy works — it helps,” she said. “We just need to open our eyes and help each other, and seek the sources that are available, and don’t think you’re the only one” with a problem or who knows someone with a problem.

Madraigos held events on parenting skills, including parenting in the internet era, in November and April, and more than 1,000 people attended, Silver said. “We wanted to give concrete ideas to parents to help navigate children today,” he said, referring to next Monday’s forum as well. The organization partners with 14 schools, including the Hebrew Academy of the Five Towns and Rockaway, offering programs to help young people avoid making destructive decisions.

Have an opinion about substance abuse in the Five Towns? Send your letter to the editor to jbessen@liherald.com.