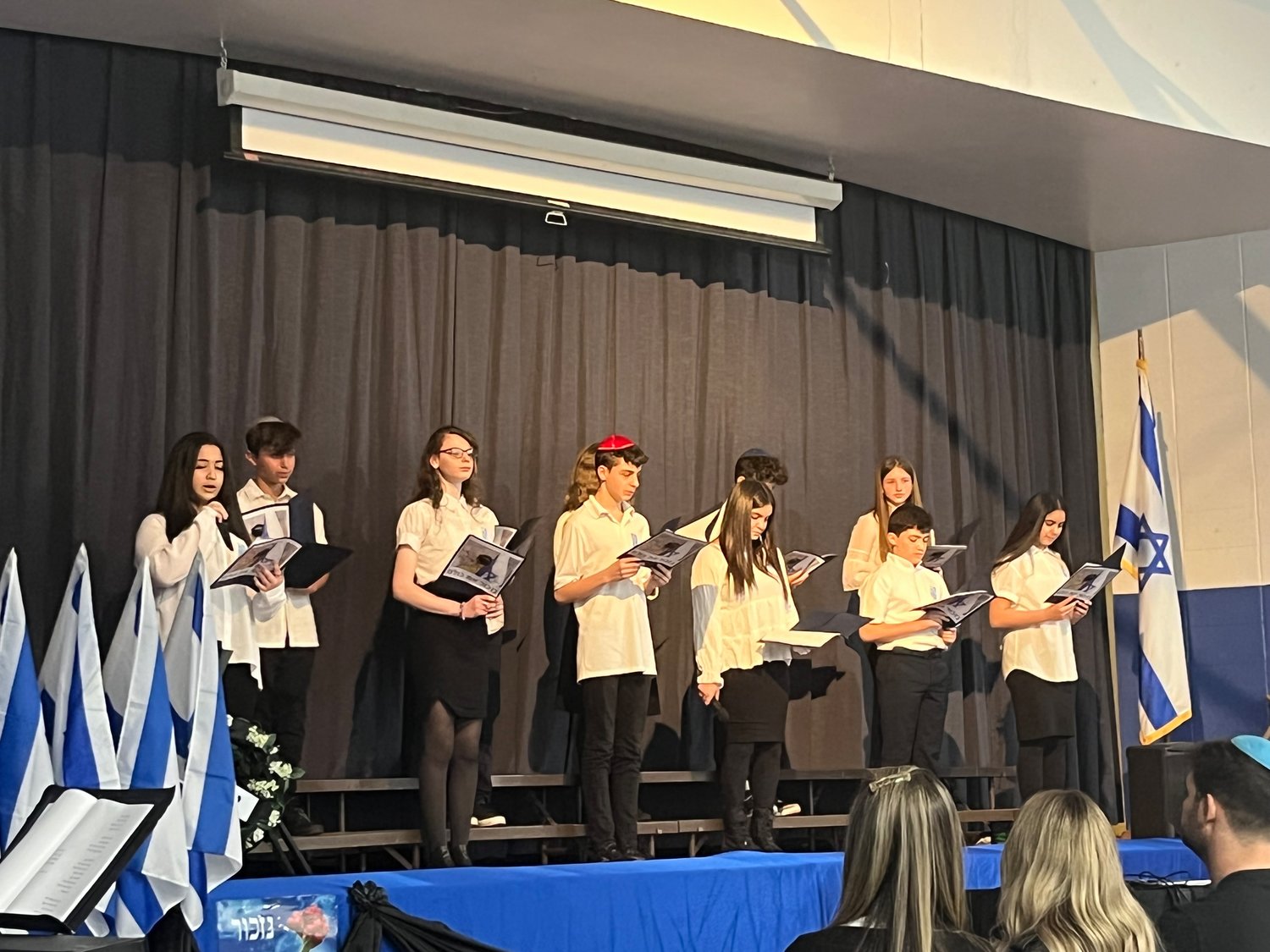 Seventh-graders at The Brandeis School in Lawrence each read a letter — written by a fallen Israeli soldier to their family during wartime — as part of its Yom HaZikaron ceremony.
Lisa Margaria/Herald
Yom HaZikaron and Yom Ha'atzmaut Yom HaZikaron

Seventh grade students at The Brandeis School in Lawrence, put together a presentation for Yom HaZikaron, reading letters written by fallen Israeli soldiers.

The Brandeis’ Yom HaZikaron is normally an annual program, yet this is the first time in two years that the event has been held in person due to Covid.

“24,068 people gave their lives so the Holocaust will never happen again,” Head of Brandeis Raz Levin said during the May 3 memorial. “Soldiers and victims of the different wars, operations, terror attacks, bystanders — that declare with their death that: we are here to stay — remember us, because that’s the gift that we gave you.”

The 11 students on stage paid tribute to victims of terror by reading real letters written by Israeli soldiers to their families during wartimes. Students also recited songs and poetry.
Judaic studies faculty members Hagit Genosar and Shelly Zaltsman helped the students put the program together.

“The program is immensely important for both the students and the community so that we can remember the young men and women who gave their life to keep Israel safe,” Zaltsman wrote in an email. “Most years we keep it general, but this year we aimed to make it more personal.”

The students took nearly three weeks to prepare for the program, beginning with choosing the letters that resonated with them most. “They choose whatever they feel they can relate to them or touch them in a way,” Genosar said after the memorial.

Once students chose their letters, they learned more about each soldier and saw the corresponding photographs. “I think once you see a person, it makes it so much more real,” Genosar said. “Otherwise it’s just like, yeah 24,068 — it’s a number. This is how you connect.”

“We wanted the soldiers to have ‘faces’ rather than just be numbers on a slideshow,” Zaltsman stated, “overall making the program much more personal than previous years. Even the songs we selected this year were songs that were written about specific soldiers.”

In the entrance hallway leading towards the memorial, there was a display depicting the photos and biography information of those soldiers whose letters were presented.

“We also decorated the entire school, Zaltsman said, “with pictures of the soldiers and their personal information.”