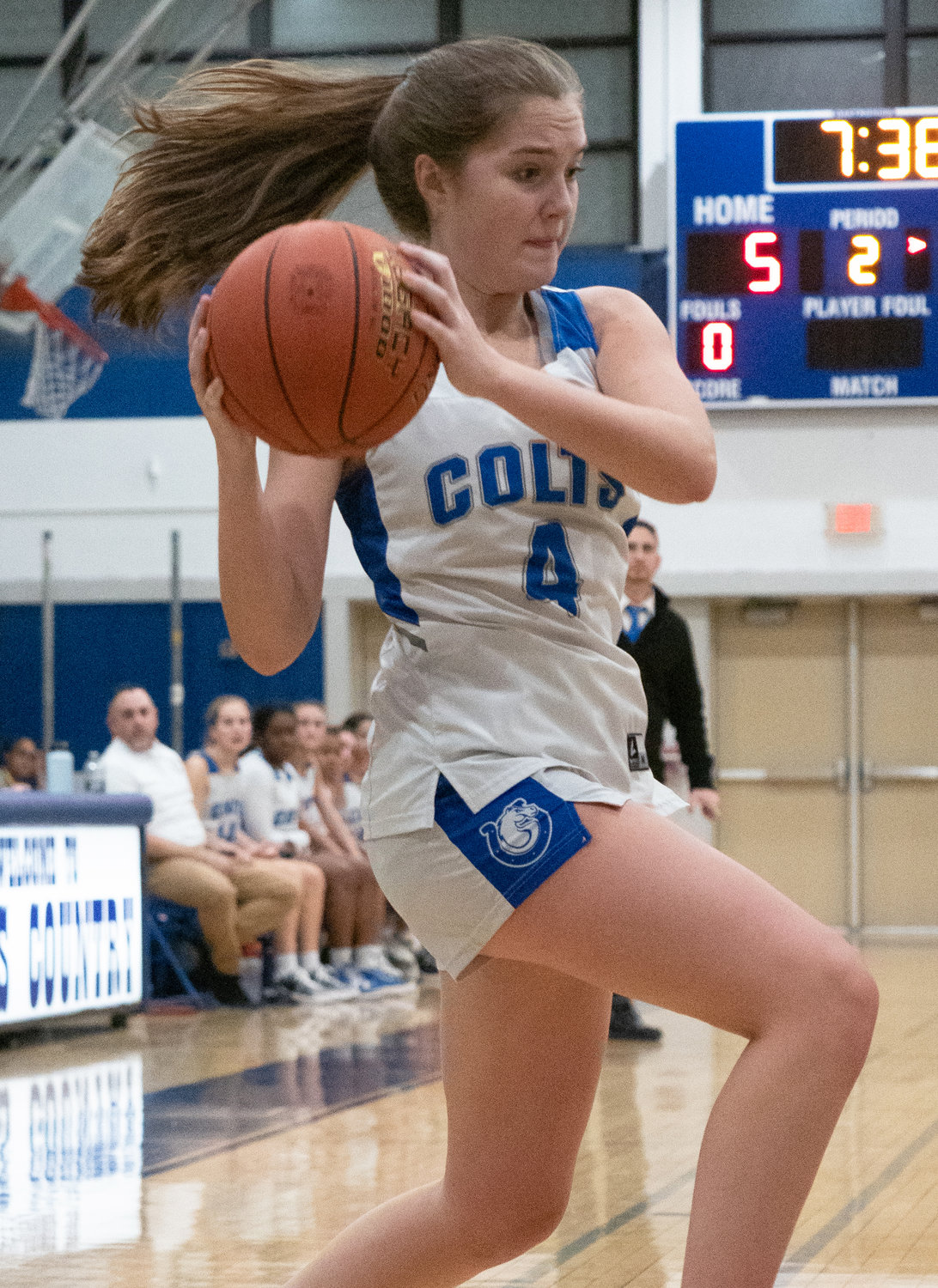 Senior Margaret Casimano is averaging 8.5 points for the Colts, who had only one blemish on their conference record through seven games.
Eric Dunetz/Herald
By Marc Berman

The Calhoun girls’ basketball team has only one regret to its 2022-23 season.

Calhoun is 8-7 overall after a difficult non-league schedule and 6-1 in Conference A1. Its lone loss occurred on Jan. 10 – a 55-52 heartbreaker against first-place MacArthur.

The rematch is Feb. 7 and Calhoun can’t wait. The Colts rallied from a 14-point hole to trail by 2 in the final 30 seconds. But it couldn’t get all the way back.

Free-throw shooting doomed Calhoun as it went 2 of 12 from the line in the loss – an indication of an offense that “comes and goes,’’ in Catapano’s words. But the second-place standing has virtually clinched the Colts a second straight playoff berth – the first time Calhoun has made back-to-back appearances in five years.

“I’m really proud of (the record),’’ said senior shooting guard Mia Licari, the team’s leading scorer at 10.7 points. "We’re already in the playoffs and only halfway through. It’s definitely stressing the next MacArthur game. We can totally come out on top for the next game. We could tie for the conference championship) if we beat them.’’

After the loss, Catapano has stepped up practicing free throws under pressure, setting up various charity-stripe competitions and giving weekly awards to the best player at practice.

“I think our free throw shooting is great,’’ Licari said. “Sometimes the pressure gets to everyone. We need to work on being under pressure. We all really want this. We want it so much the pressure gets to us. We do a lot during practice dealing with pressure and being able to handle it.’’

Though Licari’s scoring average could be higher, she’s known as their best two-way player with her knack for steals. “I feel good about it, but I can be doing more,’’ Licari said. “I’ve been working on my shooting. It’s not only how many points I put up but it’s my defense too. I’m usually guarding one of the best players.’’

The season’s start was rough with all the non-conference games and losses to rugged Lynbrook, Garden City, Plainedge and Division. “It’s a tough non-league schedule,’’ Catapano said. “Hopefully that will prepare us for the playoffs.’’

This is a team built on defense as the Colts are scoring just 38 points per game. “Scoring’s been up and down,’’ Catapano said. “But our transition play has been good. We’re doing a nice job running the floor.’’

The largest revelation has been at center with senior Marissa Lewis, averaging a double-double (10.1 points, 10.0 rebounds). Last season, Lewis didn’t start playing until late January after a severe ankle sprain but had a big offseason.

While Licari is the squad’s best outside shooter, junior Ashleigh Coyne has competently filled the point guard position after being Sixth Man last season. Senior small forward Margaret Casimano is also averaging 8.5 points. “The three (Licari-Coyne-Casimano) are holding it together for us as returners,’’ the coach said.

While Brianna Deputy and power forward Dana Wauchope have contributed, Calhoun is recently getting an unexpected boost from an eighth-grader, Angelica Kasimatis, who is earning a bigger role at the "4'' after two 10-point outings.

“It’s a group with varsity experience but not a lot of minutes,’’ Catapano said. “They’re kind of finding themselves right now. We’re hoping to get hot at the right time.’’