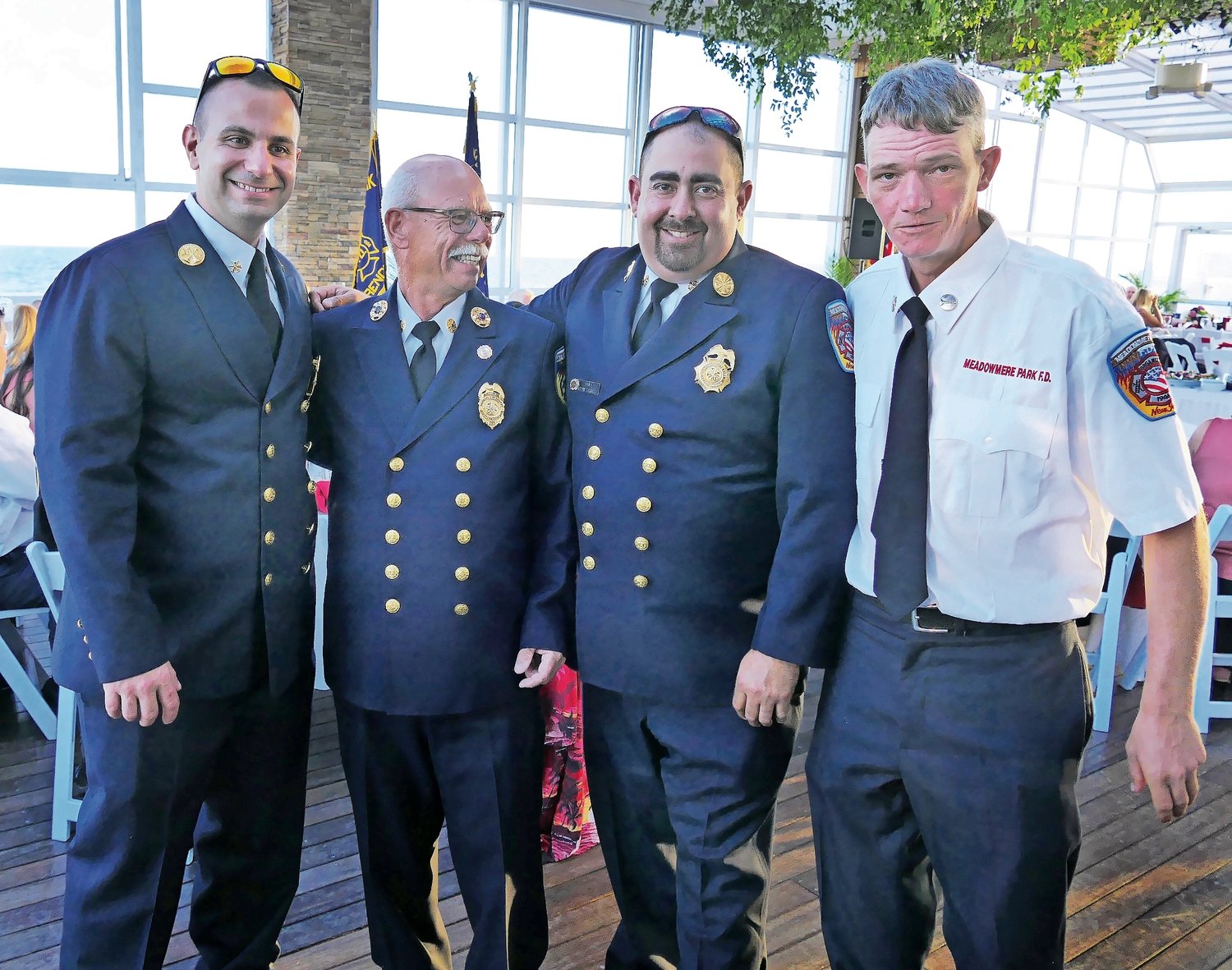 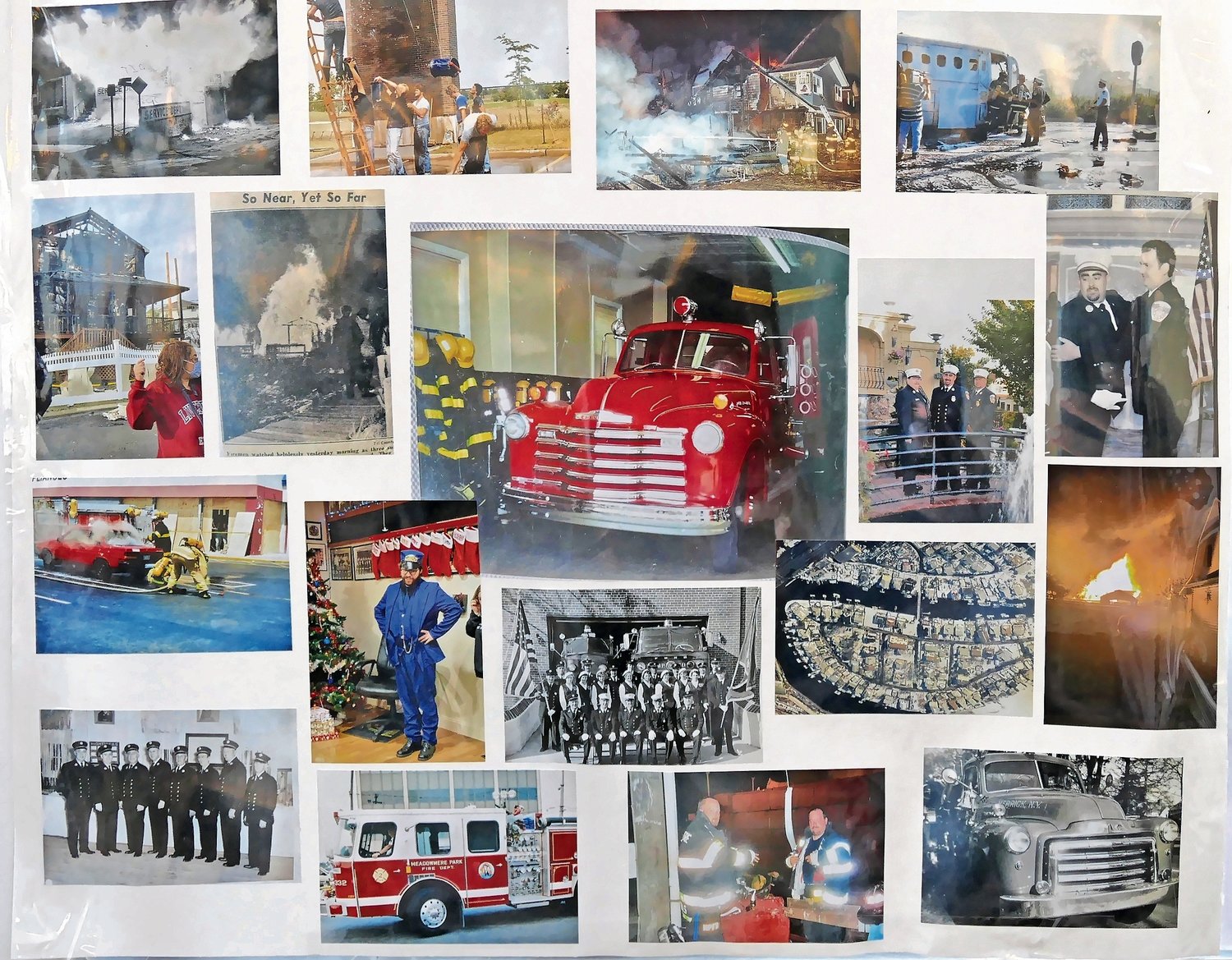 The Meadowmere Park Fire Department through the years.
Joe Abate/Herald 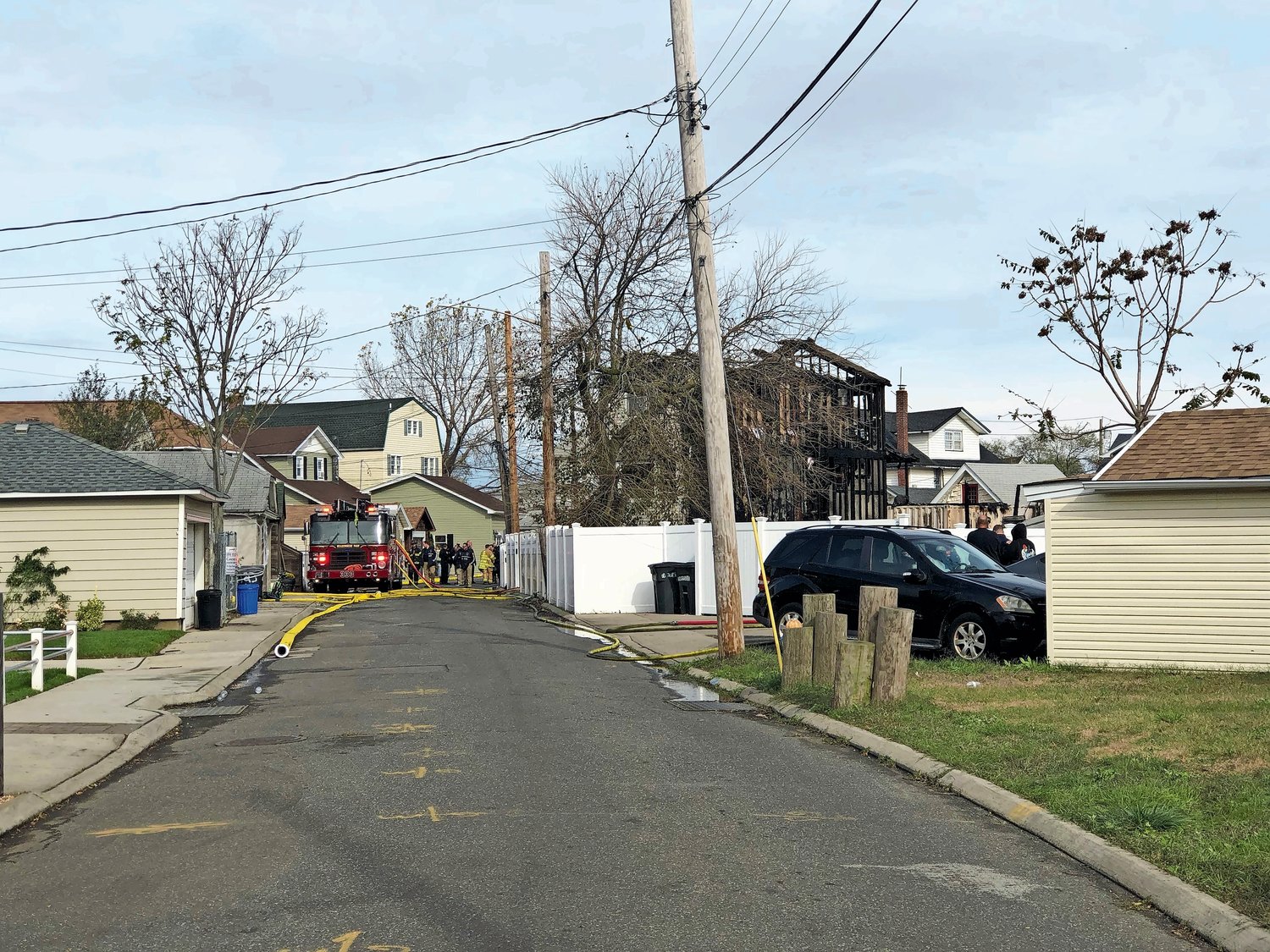 Meadowmere Park firefighters on the scene of a three-house fire in November 2020.
Herald file photo
Previous Next
By Jeff Bessen

Community, family, service. When you sit around a table in the Meadowmere Park firehouse with a handful of longtime members of the community’s Fire Department, those words spring to life.

The volunteer department, which serves roughly 100 homes nestled in the southwestern corner of Nassau County, on the Queens border, is commemorating its 76th year with the fervor of a 75th anniversary, because last year’s planned celebrations were derailed by the coronavirus pandemic.

What appears to be constant is the department’s dedication to providing the community with top-notch, dependable fire, rescue and emergency medical services.

“Once you volunteer, you’ve made a commitment,” said Scott Howie, 67, a 48-year member of the department and part of a three-generation family of emergency responders that included his father, Bill, and now his daughter Michelle, who is an emergency medical technician. Scott’s wife, Janet, and daughter Mandy are members of the roughly 12-member Ladies Auxiliary.  “You get to know a lot of people,” Howie added, “and have a lot friends.”

“Everybody I went to school with or played baseball with joined,” said 1st Assistant Chief Lumott Coleman, 55, who grew up in Inwood, joined that community’s Fire Department and, a decade ago, moved to the Meadowmere Park department. Overall Coleman has been in the volunteer fire service for 35 years.

“It’s about helping the community,” said Coleman, a critical care technician by profession. “It became a way of life. I don’t know if I’d be in the field I’m in now,” he added, if he hadn’t joined the Inwood F.D. years ago.

“My father was a member,” said Gene Hartnell, 75, a 53-year Meadowmere Park veteran. “It’s about serving the community.” He remembers when homes in the community still resembled the original summer bungalows that were built when Meadowmere Park was founded over a century ago, and the junior drill team tournaments the Fire Department once took part in.

Kevin Carrero, 41, who is in his second stint as department chief, joined around 2005, because all his friends had. “Being in the firehouse with all my friends — I love it,” said Carrero, the Herald’s 2012 Person of the Year, who views the more senior members as not only friends but virtually family members — including Ex-Chief Andrew Schmitt, who was honored for his 62 years of service at the department’s installation dinner last month.

Aid in tough times
When Carrero was chief the first time, the department opened the firehouse to roughly 75 Meadowmere Park residents whose homes had been destroyed by Hurricane Sandy. They ate, slept, recharged their electronic devices and supported one another in the days after the storm.

The firefighters’ memories of the hurricane remain vivid — memories of wading through water at least hip deep, and navigating the department’s small boat through debris-strewn streets.

“Irene teased us and Sandy slammed us,” Carrero said, referring to the tropical storm that struck Long Island in 2011, roughly 14 months before Sandy. “This was a shelter,” Howie said of the firehouse. “We were feeding everybody.”

Coleman remembers taking cold showers, and seeing pocketbooks and shoes strewn throughout the parking lot of the Payless Shoes on Rockaway Turnpike. After Sandy, the Fire Department lost 10 members, who moved out of Meadowmere Park.

Commissioner Kevin Bennett Sr. is a 20-year member. “It’s a very nice community,” said Bennett, 67. “I got to know some people. They’re always helping each other.” And of the Fire Department, he added, “It’s like a second family.”

On Nov. 1, 2020, Meadowmere Park residents were awakened by a loud noise emanating from the home at 3 South St. An explosion there ignited a fire that spread to the houses at 1 and 5 South St. as well. Before other departments were informed and responded, Carrero and Coleman were on the scene.

Remembering the fire as if it were yesterday, Coleman repeated the orders Carrero gave and described how he was writing everything down and coordinating all the medical aid. “The whole neighborhood came together and helped any way they could,” Coleman recounted, including the Ladies Auxiliary. [They] always help, Howie said.

Their experience after the attacks on Sept. 11, 2001, is also especially meaningful to department members. One of them, Thomas Jurgens, was at work as a state court officer in Manhattan when the twin towers were hit.

Jurgens, 26, responded to the World Trade Center site and saved several lives before losing his own. The community honored his memory by renaming the intersection where the firehouse sits, at Meyer and East avenues, Captain Thomas Jurgens Avenue. A memorial in the community park dedicated to those who died includes steel beams from one of the towers.

“This is a very close-knit Fire Department,” Carrero said. “It’s a great group of guys that are sticking around.”

Lily Cohen contributed to this story.