Creating a vision for the Village of Woodsburgh's future 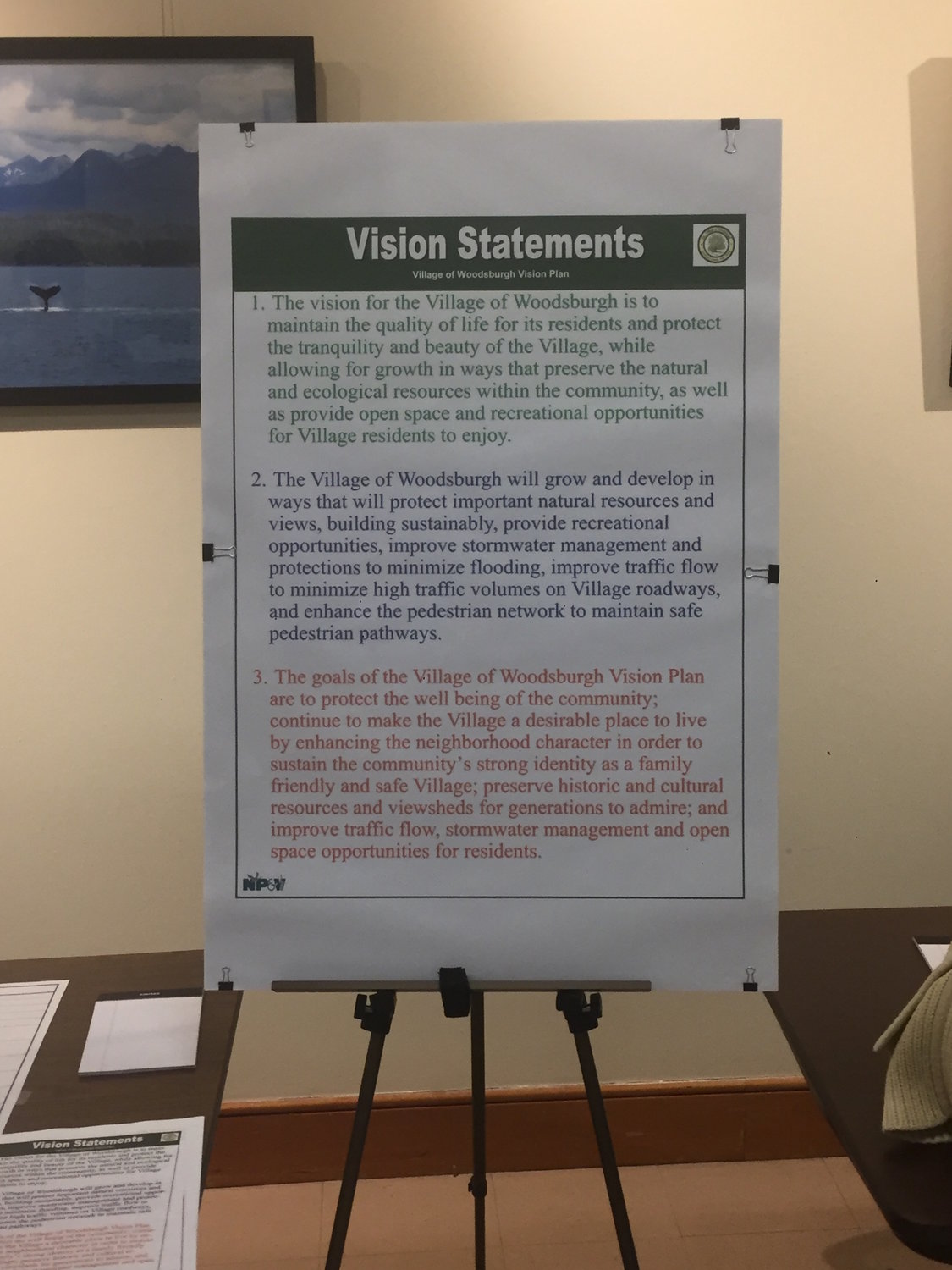 Woodsburgh village officials created the three vision statements for residents to build on through the in-person open house at Hewlett-Woodmere Public Library and the online survey.
Matthew Ferremi/Herald
By Matthew Ferremi

To obtain resident opinion on such diverse topics as flood mitigation, zoning, and wildlife, the Village of Woodsburgh held an open house at Hewlett-Woodmere Public Library on June 27 and an online survey until July 12.

At the open house there were eight stations and the survey has 21 questions ranging from what residents believe are the critical planning consideration for future focus, which scenic views are important to the village’s landscape and which type of residential housing should be supported.

The event was done in conjunction with the Melville-based environmental planning firm, Nelson, Pope & Voorhis.

Woodsburgh currently has 300 housing units composed of 219 single-family residences and 81 multi-family housing units. That number could change with the potential development of the Woodmere Club, as the current proposal has 24 of the proposed 285 single-family being built in Woodsburgh.

Woodsburgh resident Mario Alex Joseph filled out the online survey and said he appreciates the village’s efforts in obtaining the residents thoughts but expressed his frustrations with the survey. “I think the open house and online survey are wonderful ideas for the village board to reach out to its constituents,” said Joseph, co-president of the Five Towns Civic Association. “But with that being said, I feel the survey is disconnected from the reality of what is happening with the Woodmere Club development.” The civic association was established to oppose the sale and then the anticipated development of the club’s 118 acres.

Village Mayor Lee Israel said the open house idea had been discussed for six months. “This has been an ongoing process,” said Israel, who has held the post since 2013. “Nelson, Pope & Voorhis have done a lot of work on this and they’ve done a great job helping put this together.”

When thinking of a community in the Five Towns, wildlife is probably not the first thing that comes to mind. One of the stations was dedicated to wildlife activity within the village. Nelson, Pope & Voorhis representative Ray Marino noted that rare species live in the village. “Before tonight, I didn’t know the presence of the diamondback terrapins in Woodsburgh,” he said. Diamondback terrapins are the only turtle species in North America that live in a mix of fresh and saltwater. “It’s important for people to know what kind of wildlife exists in their area.”

Village officials created three vision statement that residents could add and build upon. No. 1 stated: “The vision for the Village of Woodsburgh is to maintain the quality of life for its residents and protect the tranquility and beauty of the village, while allowing for growth in ways that preserve the natural and ecological resources within the community. As well as provide open space and recreational opportunities for village residents to enjoy.”

Israel said the open house was a place for residents and village officials to speak. The information gathered from the event and the online survey will guide what the trustees do in the next few years. “We wanted to make sure that we give residents the opportunity to share their thoughts on the community they live in,” he said. “An event like this allows us to get a good pulse on what the community wants.”

To take the online survey until July 12, go to https://www.surveymonkey.com/r/WoodsburghVision.

Have an opinion on the future vision for Woodsburgh? Send your letter to the editor to jbessen@liherald.com.