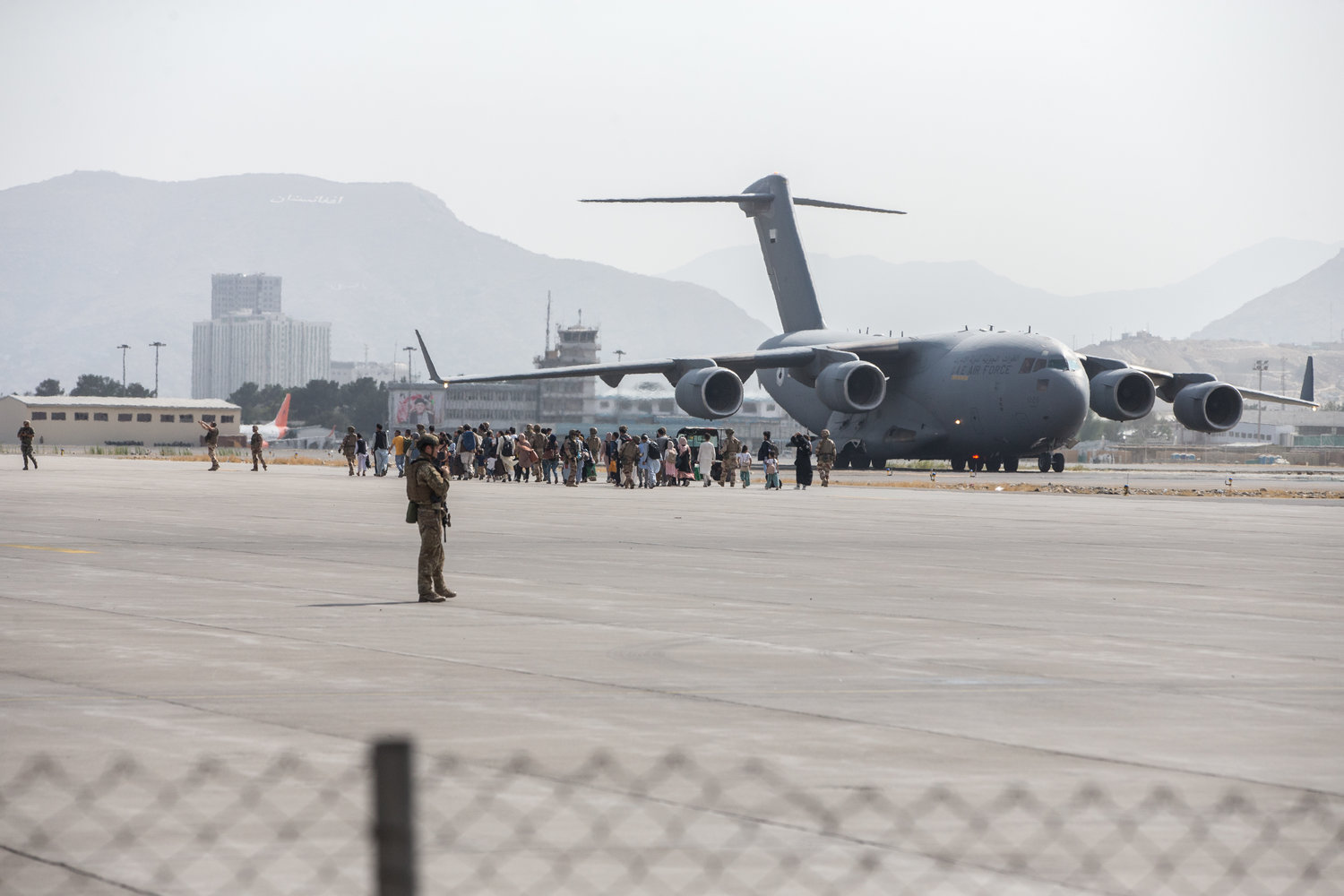 The civilian evacuation at Hamid Karzai International Airport in Kabul on Aug. 21, five days before the attack that killed as many as 170 Afghan civilians and 13 U.S. service personnel.
Wikimedia Commons
By Jeff Bessen

After a harrowing 18 days in Afghanistan last month, a woman from Westchester County, traveling with two of her three children, returned safely to the U.S., after an experience that could have been a plotline for a Hollywood movie.

A rabbi emeritus from the Five Towns, three Westchester-based grass-roots organizations, the office of a United States senator, a former secretary of state and the American State Department joined forces to help her.

The woman, who has been identified only by her initials, M.G., due to security concerns, traveled to Herat, Afghanistan, in late June — against the advice of her family — to visit her mother, who suffered a stroke last year. She took her younger children, a girl, 9, and a boy, 7. She planned to return home on Aug. 4.

Taliban fighting near the Herat airport forced the cancellation of their flight home, but it was rescheduled for a week later. There were battles between the local militia and Taliban forces in Herat on Aug. 11. M.G’s children went to bed that night to the sounds of machine gun fire and grenades, according to Jeff Swarz, of the Interfaith Council of New Americans Westchester. A day later, the city fell under the control of the Taliban.

M.G.’s husband, in touch with her from their home in Westchester, told her to go to a friend’s house near the airport to hide. Before the Taliban could conduct house-to-house searches for perceived enemies, her husband’s brother, in Kabul, and his brother’s father-in-law, in Herat, devised what Swarz called a “bold escape plan.” M.G.’s brother-in-law helped with logistics and peformed translation for the U.S. Army, covering 13 provinces, and a translator and interpreter for the Army and the U.S. Embassy in Kabul.

From Herat to Kabul
Risking all of their lives, the father-in-law took M.G. and her children with his family from Herat to Kabul, nearly 400 miles away — roughly the distance from New York City to Buffalo. Kabul was at that point still a free city, not yet under Taliban control.

“They made a run for Kabul,” Swarz said, noting that this was nothing short of death-defying. “The roads are horrible. A seven-hour trip in America is two days in Afghanistan.” M.G. has an American Green Card and her husband, who has a Special Immigrant Visa that allows him to be in the U.S., is known to the Taliban. He served as a logistic manager covering 13 provinces and was an interpreter.  These circumstances endangered their lives.

During the two-day trip — Aug. 14 to 15 — the family had to pass through Taliban-manned checkpoints to leave Herat, and relied on local villagers for their safety. In an effort to reduce the danger, they drove all night and arrived in Kabul at 2 a.m. M.G. and her children hid in her brother-in-law’s house. The city fell to the Taliban later that day, and the roads into Kabul were closed.

Support from the U.S.
The Interfaith Council of New Americans Westchester, Hearts & Homes, the Westchester Jewish Coalition for Immigration, Keeping Our Promise and several other groups were made aware of M.G.’s situation, and beseeched the State Department to help bring her and her children home.

“Among the most commonly cited lines in both Jewish and Muslim tradition are variations on the conviction, ‘One who saves a single life, it is as though that person saved the entire world,’” said Rabbi Jay Rosenbaum, rabbi emeritus of Temple Israel of Lawrence and now the rabbi at Temple Israel of New Rochelle.

Rosenbaum is also president of the North American Board of Rabbis, and is well known to national elected officials. He suggested calling U.S. Sen. Kirsten Gillibrand, and the call reached Gillibrand’s senior adviser, Geri Shapiro, who had worked for Hillary Clinton when the former first lady was a senator from New York. Emails were sent to Clinton, who is also a former secretary of state, and her team made calls to the State Department.

“It’s not unusual for rabbis to have a network of connections beyond congregational boundaries,” explained Rabbi Michael Zedek, of the Emanuel Congregation in Chicago, the senior vice president of the North American Board of Rabbis, who also made calls on M.G.’s behalf.

“It’s what we’re supposed to do — bridge building.” Zedek said this was the first time he had been involved in something so bold and immediate, and noted, “The world never has a shortage of humanitarian challenges and crises.”

On Aug. 17, M.G. was instructed by the U.S. Embassy to go to Hamid Karzai International Airport in Kabul. She and her children waited for 12 hours, but did not make it through the two gates that were then opened once a day by the U.S. military. The following day the family got inside the airport, and the wait to get on a flight began.

On Aug. 19, they boarded a flight, and arrived safely in Qatar the next day. M.G. called her husband on a borrowed phone on Aug. 21. A day later — four days before the attack on the airport that killed as many as 170 Afghan civilians and 13 U.S. service personnel — she and her children were back at home.

Throughout August, there were thousands of similar dramas involving people seeking to leave Afghanistan. “Saving lives is the biggest mitzvah in Judaism,” Rosenbaum said, aiming to put all this effort into context. “We know firsthand what it means to have doors closed on us,” he added, referring to the infamous 1939 “Voyage of the Damned,” when more than 900 Jewish refugees left Germany on the Motorschiff St. Louis, a German ocean liner, and were refused asylum in Cuba, the U.S. and Canada.

The ship retuned to Europe, and roughly a quarter of those onboard were killed in concentration camps during World War II.

As of press time, M.G.’s brother-in-law was still trying to get a Special Immigrant Visa to leave Afghanistan.

Reflects changes to the jobs of M.G.'s husband and brother-in-law.