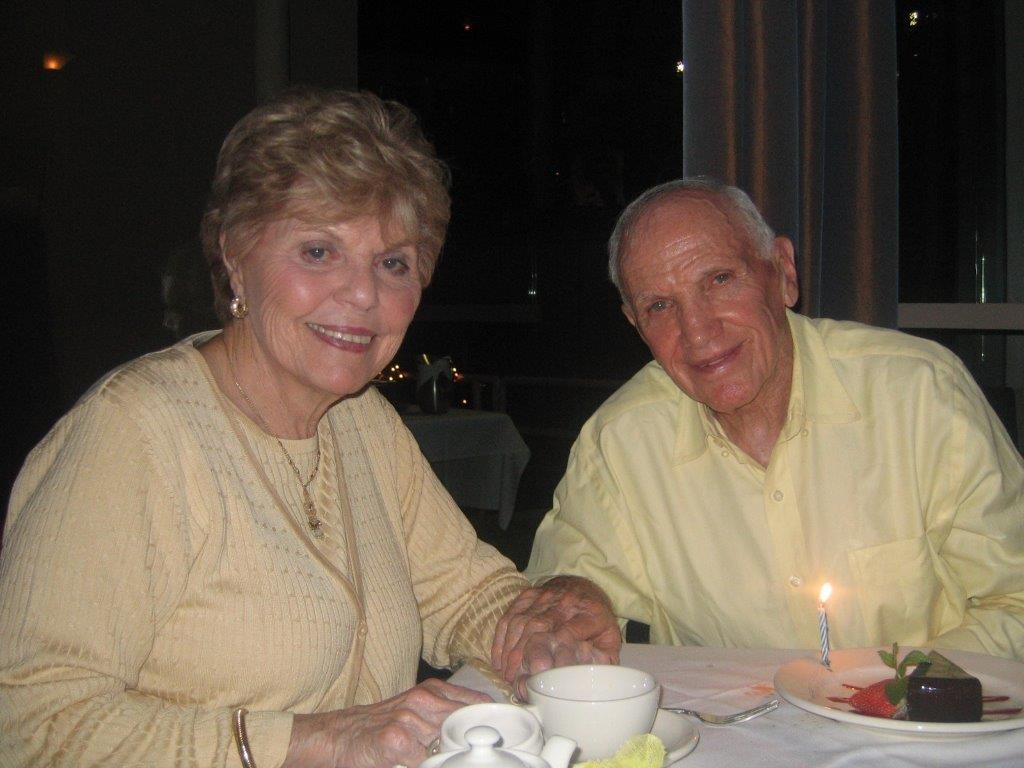 Florence and Ernie Weinrib met during World War II and were married for 62 years.
Courtesy Lisa Weinrib
By Jeff Bessen

Florence Weinrib had a Hollywood-like reunion with her future husband, grew up in a multigenerational household and spoke five languages, in addition to English.
“My mother was very bright, had a great sense of humor, was easy to talk to and a great friend,” said her daughter, Dr. Lisa Weinrib.
Florence died of severe heart failure on Nov. 24. She was 90.
Born on March 4, 1925, Weinrib grew up in Rockaway in a multi-level house that was made a home by the great-grandparents, grandparents and all the other relatives who lived there. Nights were spent together, talking and drinking coffee well past midnight, Lisa said.
The youngest of Carl and May Lazan’s three children, Weinrib was a talented pianist who was offered a scholarship to the Julliard School, a performing arts conservatory in Manhattan. Her father owned the original El Patio Beach Club and Capri in Atlantic Beach and owned the largest shoe store in Manhattan at one time that carried Selby and Footsaver shoes. The fictional beach club in the 1984 movie “The Flamingo Kid” was based on the El Patio.


A graduate of Far Rockaway High School, Weinrib earned a degree in languages from Penn State University. She spoke Spanish, Italian, Russian, French and Portuguese. At State College in Pennsylvania, Florence met Ernie Weinrib, an officer in training for the U.S. Army, and World War II was raging.
“The two had quite the wartime romance,” Lisa said. “My recollection was that my father came home because of his father’s death, and they reunited in the middle of a big crowd at Grand Central [Station] with every one cheering.” Ernie had fought in the Battle of the Bulge and was about to be deployed to the Pacific Theater, when his dad died.
Ernie Weinrib founded Ernest Realty of the Five Towns and built luxury homes in Hewlett Harbor and owned many buildings in Woodmere, where the business was based. The family, which came to include Lisa and her brothers, Richard and Neil, lived in Hewlett. The siblings all graduated from Lynbrook High School.
Before having children, Weinrib worked for a brief time as a secretary for a Spanish import company. Later on she became very involved with Hadassah, the women’s Zionist organization of America, and wrote their show productions that received “great reviews,” Lisa said. Weinrib also tutored Spanish-speaking children and had a submission receive mention in a Writer’s Digest Contest.
Members of Temple Israel of Lawrence, Florence and Ernie also volunteered their time to the Reform synagogue. They were married for 62 years. Ernie died in 2008. Several months later in 2009, Florence fractured her hip, which limited her mobility and forced her to move to an apartment in Lawrence from her Atlantic Beach home where the Weinribs lived from 1988 to 2008. “She always loved the peace and tranquility of the ocean,” Lisa said. Florence did retain ownership of the Atlantic Beach home.
In addition to Lisa and her husband, Doug, and Richard and his wife, Estee, and Neil and his wife, Kimberly, Weinbrib is survived by four grandchildren and two great-grandchildren.
Services were held at Boulevard-Riverside Chapel in Hewlett on Nov. 27. She was interred in Beth Moses Cemetery in Farmingdale.
Report an inappropriate comment