Flying the W for the Chicago Cubs 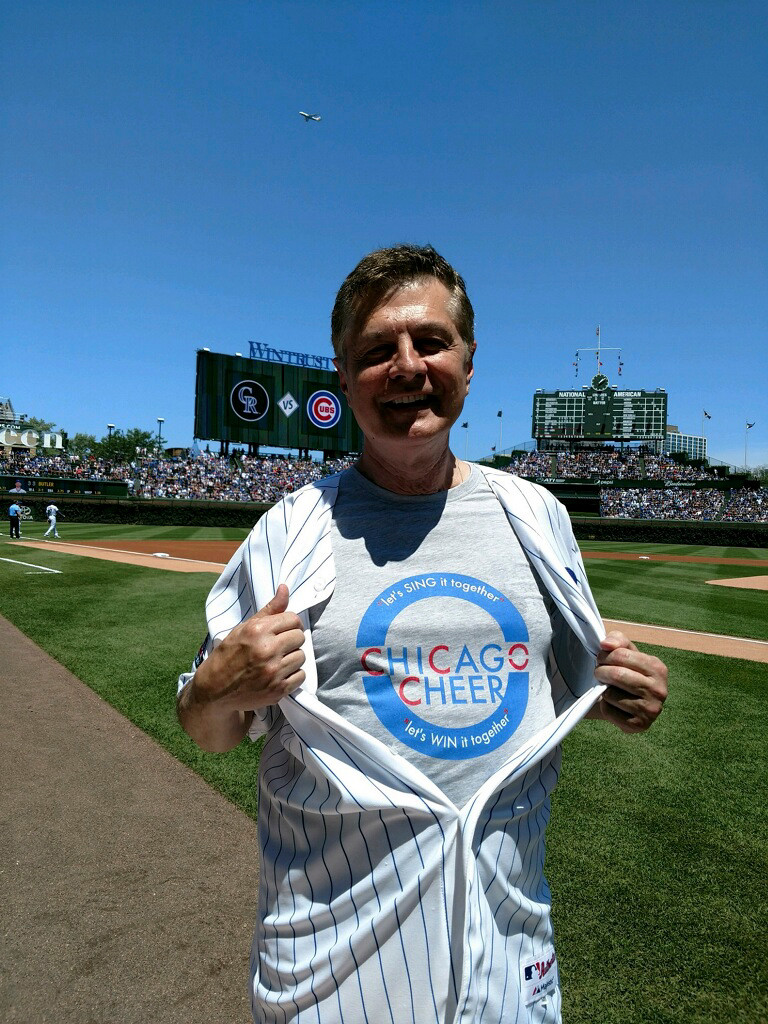 It was exciting to have this opportunity. Especially as a die-hard long-suffering Cubs fan.”
Ken Franklin, Songwriter
By Tyler Marko

Although he may have grown up in Lawrence rooting for the Mets, Ken Franklin has found a second home in Chicago and inspiration in the Cubs’ 2016 World Series win.

Using the contacts he’s made though his music licensing company RadioActive Talent Inc. Franklin collaborated on a song he hopes to be able to hear throughout the North Side of Chicago.

Titled “Chicago Cubs Family (Fly the W)” the song was written by Franklin, but it was composed and performed with the help of Chicago-area singer-songwriter, Liz Chidester, Cubs fan and guitarist for The Buckinghams, Carl Giammarese and drummer Joe Vitale, who’s performed and written songs with Crosby, Stills & Nash and the Eagles.

Franklin sees his song as an updated “Go Cubs Go,” the song played at Wrigley Field after a Cubs win. He also sells merchandise on his website, ChicagoCheer.com and would love to get one of Chicago’s famous bands like Cheap Trick or Fall Out Boy to perform the song for charity. “We have a great song …” said Franklin, “I really want to get involved with at least one charity that has a relationship with the Cubs to help tie them together.”

Giammarese said when Franklin reached out to him he immediately jumped at the chance to do this. “It was exciting to have this opportunity,” he said. “Especially as a die-hard long-suffering Cubs fan.”

This is not be the first time Franklin has brought his musical touch to a charitable cause. In the mid-2000s he brought his Skoolapalooza show to the Five Towns, including Hewlett High School, Lawrence High and Lawrence Middle School, and many other Long Island schools for free, as his company covered the coats of the shows. The program’s motto was “Turn up the music, turn down the drugs.”
Music had been Franklin’s passion since he was young, “Music is my main love in life,” he said. His mother, Bea Franklin, has lived in Lawrence for 59 years. When he was young she would play records for him, then he got his own turntable. “I thought he’d lose his hearing with his fancy headphones on,” she said.

Franklin was lucky enough to turn his passion into his career. Today he works alongside musicians to help license their music to be used in commercials, movies, television and other media. Giammarese described him as dedicated. “Ken never gives up,” he said.

Ken said he thought of writing a song about the NHL Nashville Predator, while they were on an impressive playoff run this year. However, he said if the Cubs song catches on he might try to come up with one for Chicago’s hockey team, the Blackhawks next.

“Chicago Cubs Family (Fly The W)” can be found on ChicagoCheer.com along with shirts, hats and other merchandise. Franklin hopes that his song may one day become synonymous with the Cubs, but above all else he hopes he can use it to help people. “Our song is living proof that we have something substantial,” he said about the song.