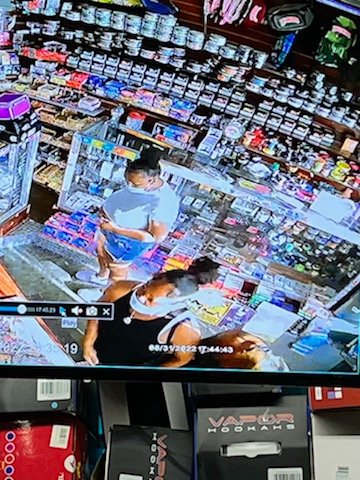 Two of the three women, along with a teen boy, who allegedly robbed a smoke shop in Inwood on Aug. 31.
NCPD
By Jeff Bessen

Nassau police are looking for four people — three women and a young man — who allegedly robbed the Fazieah Smoke Shop on Sheridan Boulevard in Inwood at 5:30 p.m. on Aug. 31.

The four entered the store, approached an employee and asked questions about specific products, police said. As the employee, a man, 22, turned around, two of the women allegedly sprayed him in the face with an unidentified liquid that caused severe pain and burning, according to police.

Then the four allegedly took 25 Air Bar vape pens valued at roughly $250, left the store the store and headed north on Sheridan Boulevard, police said. Then they headed to E. Carvel Place and into Inwood Park.

All are described as being black. All three women are considered to be about 25 with heavy builds. One had black hair, a white facemask, white shirt, denim shorts and white sneakers.

One of the women also had black hair and a white mask with black shorts and a black sleeveless top. Another had black with orange dyed hair, a white mask, black shorts, a black sports bra, white shoes and was seen carrying a large colored bag.

The young man, 15, was wearing a white mask, a white tank top and blue shirts.