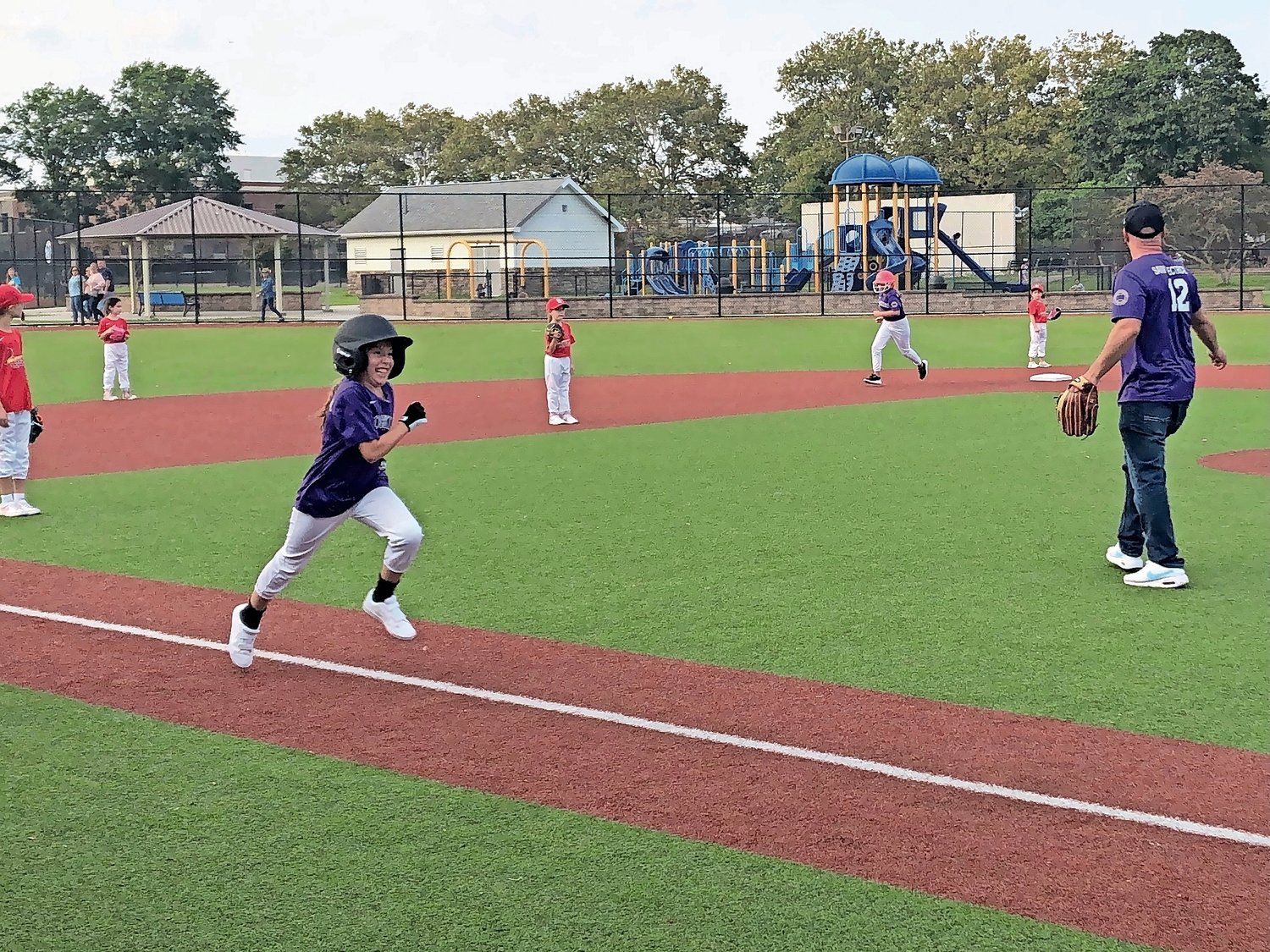 The Rockies’ Fay Kleinman chugged home ahead of Coralia Savin who slammed a two-run dinger in the Sept. 13 game at Grant Park in Hewlett.
Lisa Margaria/Herald 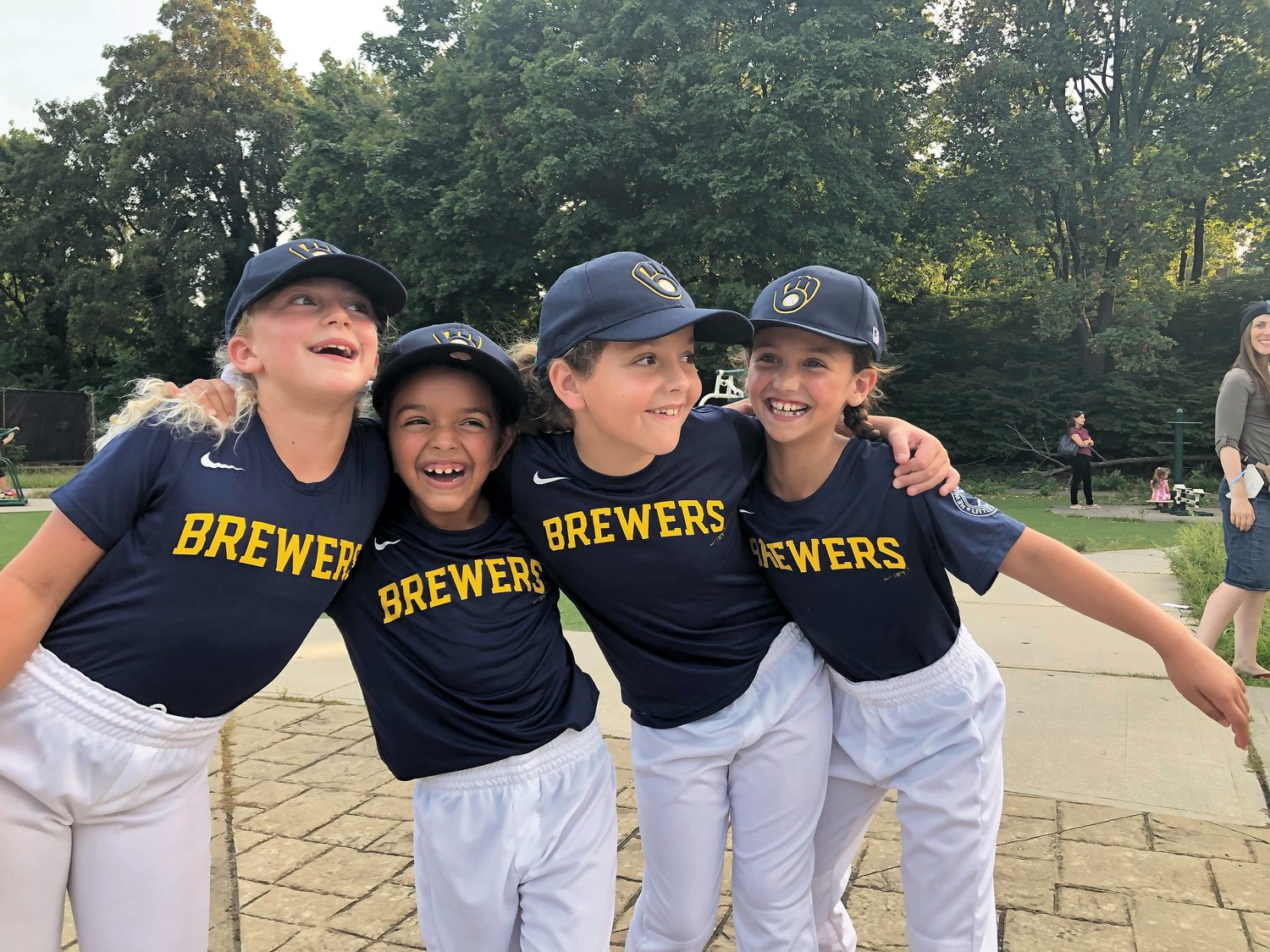 The new Hewlett-Woodmere Little League three-team softball program got under way earlier in the month, with the Rockies playing their first game against the Cardinals a 20-13 loss on Sept. 13 at Grant Park in Hewlett, after a decade without the sport being part of the 64-year-old league. The Cards played the Brewers the day before to a 15-15 tie.

Rockies coach Mike Savin led the recruitment for the girls’ softball league because his daughter, Coralia,9, was playing on the boys’ team. “There was no girls softball. I have another daughter younger than her, so I’m going to be invested in this league for the next 10 years,” Savin said.

After making plans to build a league for the sake of his daughters, Savin recruited parents of Little League girls mostly through Facebook’s local district groups and the Herald ran a story on the new program in June. By recruiting 36 girls to form 3 teams of 12, a softball league was established and registered.

Coralia Savin played on the boys’ baseball team for two years, however, being one of the only girls on the team did not discourage her from the sport. She hopes to make some new friends this season on her softball team. Coralia listed the advantages of being on a sports team: “You’re going to be stronger and you’re going to be way more healthy,” she said.

Brewers coach, Nicole Eliopoulos, noted that the girls like that the teams are representative of their gender. “Most seemed to love being out there,” she said. “Some, I think, are not sure if they like it yet, but the main thing they kept saying is they love that it’s finally all girls!”

Eliopoulos’ daughter Zoe was one of the few girls who played on boys’ baseball before joining the Brewers. “My daughter had to play with boy’s baseball and really couldn’t get into it as she was the only girl,” Eliopoulos said.

The Rockies held three practices before the first game, Savin said. The other teams also had multiple and joint practices as well. Whether a win or a loss, the girls just wanted what Cyndi Lauper sang about. “I just want to have fun,” Brie Pearl, 7, said before the game.

Parents stood in the crowd together, many of them watching their daughters first softball game ever. The cheers, yelling, and clapping of supportive parents added to the excitement of the sporty atmosphere, and they only got louder as the game progressed. “I also love that the parents have such enthusiasm,” Eliopoulos said. “No one is complaining about the score, but just happy the girls have a team to play and learn on.”

During the game in the dugout, the girls on the bench were anxious and excited, hoping for the best possible outcome from their first game. “I think that they love this,” said Etereya Savin, Coralia’s mother. “You can see the excitement. You can see she is part of a team.”

For more information about the Hewlett-Woodmere Little League, go to https://hwlllittleleague.com.