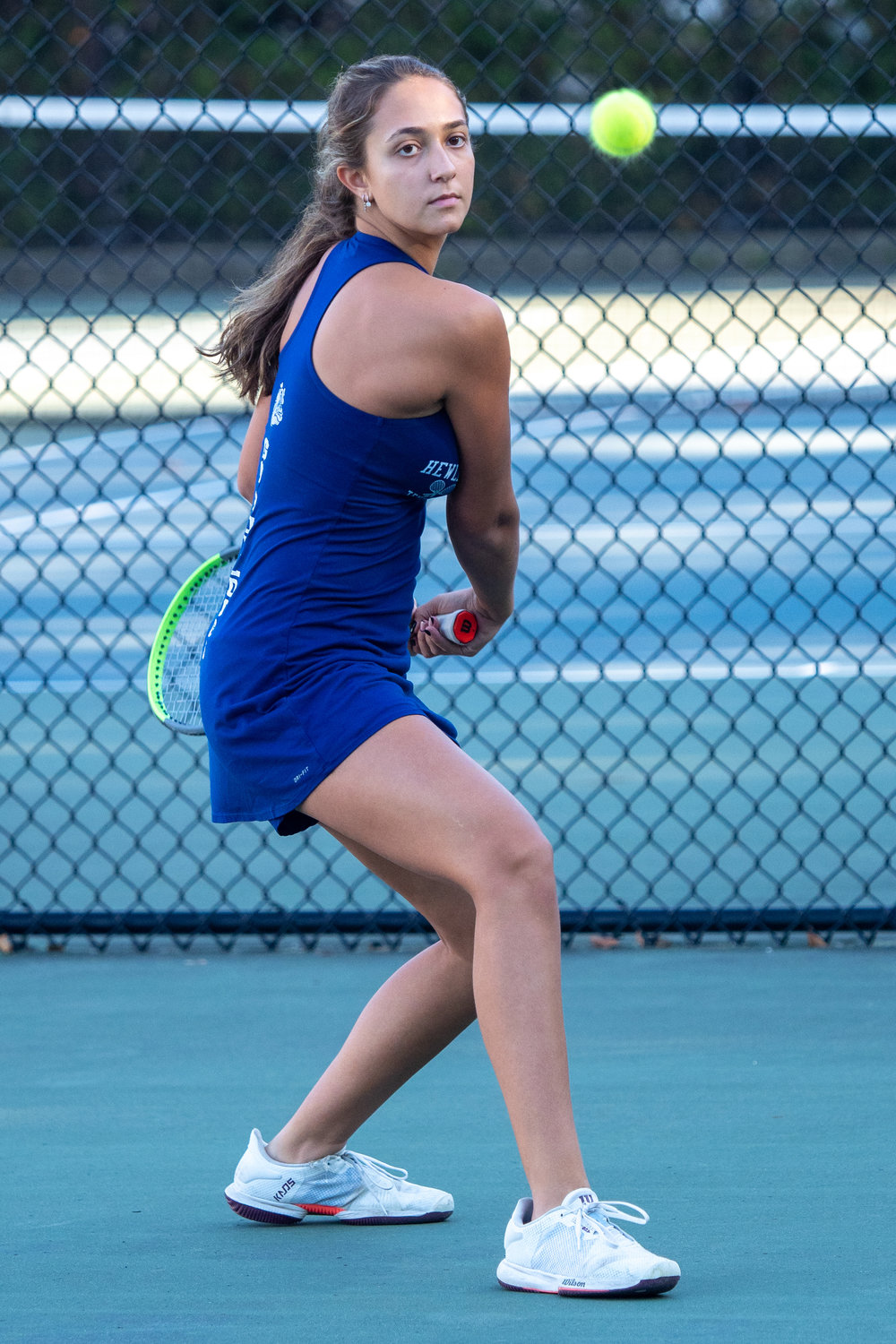 Fifty years ago, the Miami Dolphins posted a 14-0 regular season record – and finished as the only perfect team in NFL history.
The Hewlett girls’ tennis team has gotten itself into good company. After moving down to Conference 2B following a one-win season at the top rung, Hewlett became a model of perfection, posting a 14-0 record.
The team was led by junior first singles player Nyla Gershfeld, who finished fourth in Nassau County, earning All-State honors.
Gershfeld finished her fifth season on Hewlett, joining as a 7th grader, playing singles each season. She comes from good stock. Her brother, Stephan, now a Hewlett senior, won the 2021 state boys singles title.
This fall, Hewlett’s girls lost just one singles match all regular season. Second singles Sahara Ahmad was unbeaten at 12-0. At third singles, Tiffany Lin, an 8th grader, was 13-0. In the Nassau County individual tournament, Ahmad and Lin teamed up to play in doubles and won All-County honors.


“I honestly did (think we could go unbeaten),’’ Gershfeld said. “I was very confident in our team because I knew we gained a lot of new players, three new freshmen and an 8th-grader. Our lineup was pretty strong and moving down a conference, we’d be one of the best teams playing.’’
Gershfeld lose just one match – to Mepham. Otherwise, the Bulldogs were flawless.
“(Nyla) has a big serve, a willingness to fight on the court, scramble with her defense,’’ said Hewlett coach Brett Verini, who played high school tennis for Half Hollow Hills. “She’s got a great mentality on the court.’’
Gersheld will be a senior next season and has eyes on college tennis and follow in her brother’s footsteps as he’s committed to University of Illinois-Chicago.
The coach thinks his sister could be a county singles title favorite in 2023. In 2019, Gershfeld played doubles in counties, won the Nassau title and a state championship.
Hewlett had three freshmen playing on their top three doubles squads, including first doubles Eva Karmazin, who teamed with junior Mia Teplish. Freshman Olivia Tetsoti was at second doubles with senior Rachel Kauderer. And freshman
Miriam Khmelniker played third doubles with senior Rachel Halpert. The fourth doubles team consisted of two juniors in Aryn Feldman and Sonya Kruglyansky.
There was indeed a paltry amount of seniors - three seniors with two starters. That bodes well for next season when the Bulldogs are expected to be promoted back to the Conference 1.
“I feel excited about it,’’ Gershfeld said of moving back upstream. “I don’t think it will be a struggle. Playing down in the lower conference showed the girls we were much more competitive team than (2021).  Last year we did lose a couple of players that were seniors. The new girls coming in our team are  much stronger than when we were up there (in 2021).’’
In the county team event, Hewlett advanced to the Nassau County quarterfinals before losing to powerhouse Port Washingtn.
“We’re going to do well next year,’’ Verini said. “We played Port Washington very close. We’re not losing anyone (in the top 5). There’s things to work on but there’s a lot of potential for this team next year. We’ll settle in comfortably.’’