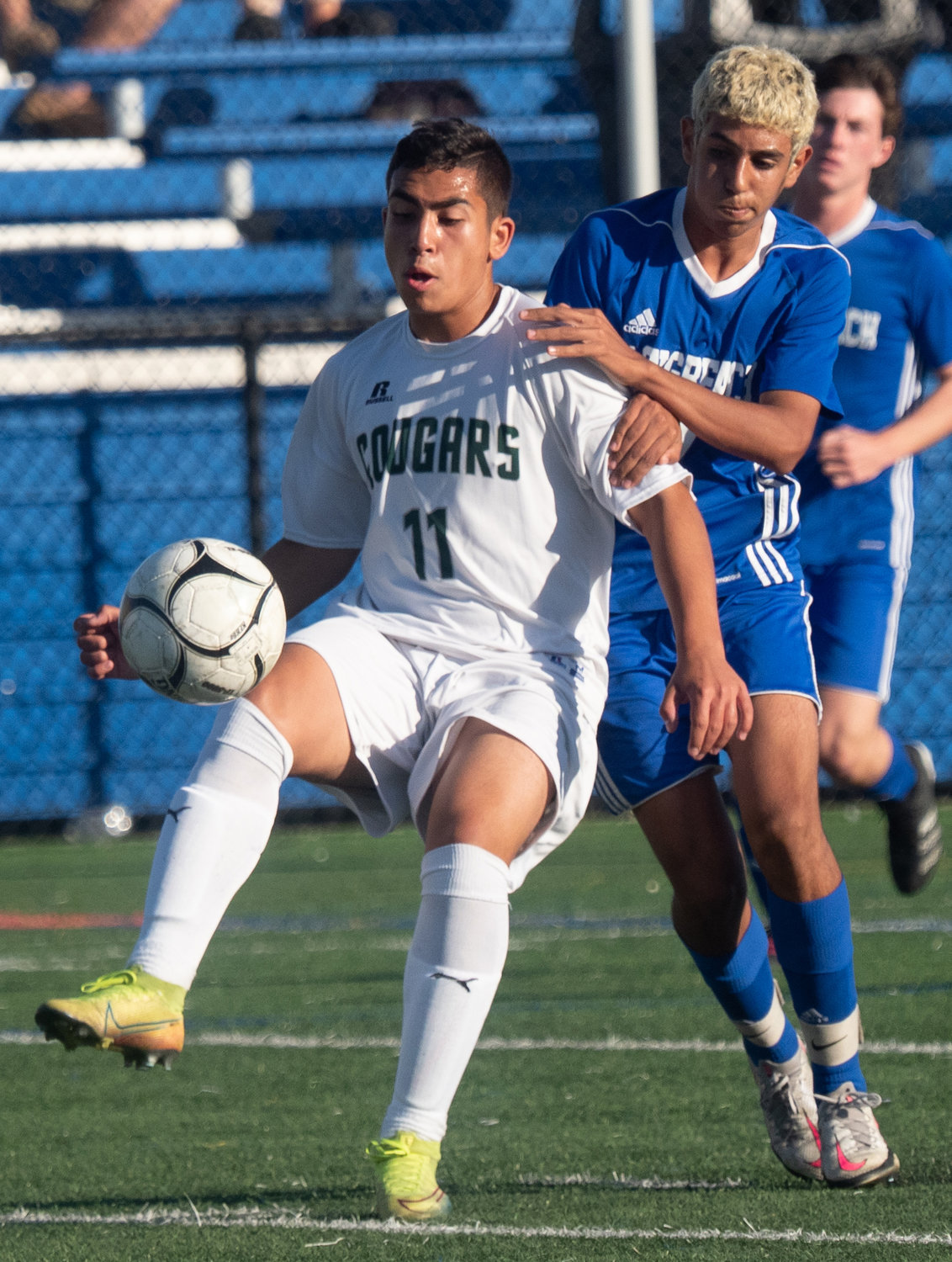 The Long Beach boys’ soccer team picked the perfect time to break out of its scoring slump.
Aran Corbett scored the Marines’ first goal in over two weeks and Yeris Miranda added two more as No. 16 Long Beach topped No. 17 Kennedy 3-0 to advance to the second round of the Nassau A playoffs on Oct. 20.
Arthur Quezada had two assists and Ryan Ocampo also had a helper for the host Marines.
“Today, we played like we played in the beginning of the season,” said Long Beach coach Leo Palacio. “We focused on scoring the last two days, getting the ball to the outside and get it back in. And that’s exactly how we scored today.”
Kennedy took the field with heavy hearts after assistant coach Marc Stein passed away days earlier. No cause of death was given, but a moment of silence was held before the game at Alumni Field and each Cougar player carried a small black swatch with a white ‘S’ on it.


“We put our best foot forward out there,” said coach Ari Bisk. “It was a difficult game. Long Beach played well, but I’m proud of our effort and we’ll try to get further next year.”
Long Beach controlled the play for most of the game and limited the Kennedy offense to just four shots on goal. Goalkeeper Ari Mann’s toughest save came with just over 17 minutes remaining, when he punched out a 35-yard one-hopper by Cougar midfielder Dylan Cuttler.
The Marines’ moved the ball crisply right from the opening whistle and the offense finally broke through when Ocampo’s crossing pass from the left wing was finished by Corbett at the right side of the goal 21:31 into the game.
“Me and Coach Leo were talking about how I have to go to the back post in school today,” Corbett recalled. “I just waited back post, the ball came in perfectly and I just put it in the net.”
It was Long Beach’s first tally since a 2-1 win over Great Neck North on Oct. 2. The Marines were shutout in each of their last four games, resulting in three losses and a tie.
“We’ve all been missing celebrating with the team when we score,” Corbett said. “We haven’t in a while, so that goal really meant a lot for everyone.”
Just over two minutes later, Quezada dribbled towards the goal from the left side, drawing Kennedy goalkeeper Antonino Scimeca out of the net. Quezada then sent a pass into the middle of the box, where Miranda converted the easy tap-in.
With just under 24 minutes left in regulation, Quezada chipped a lead pass to Miranda just outside the middle of the box and the junior forward poked the ball into the lower right side of the net for his fifth goal of the season.
Scimeca finished with 11 saves for the Cougars, which finished the season 5-7-1. Defensive back Youssof Bendary had a strong game despite the loss as he consistently broke up Long Beach rushes and scoring opportunities.