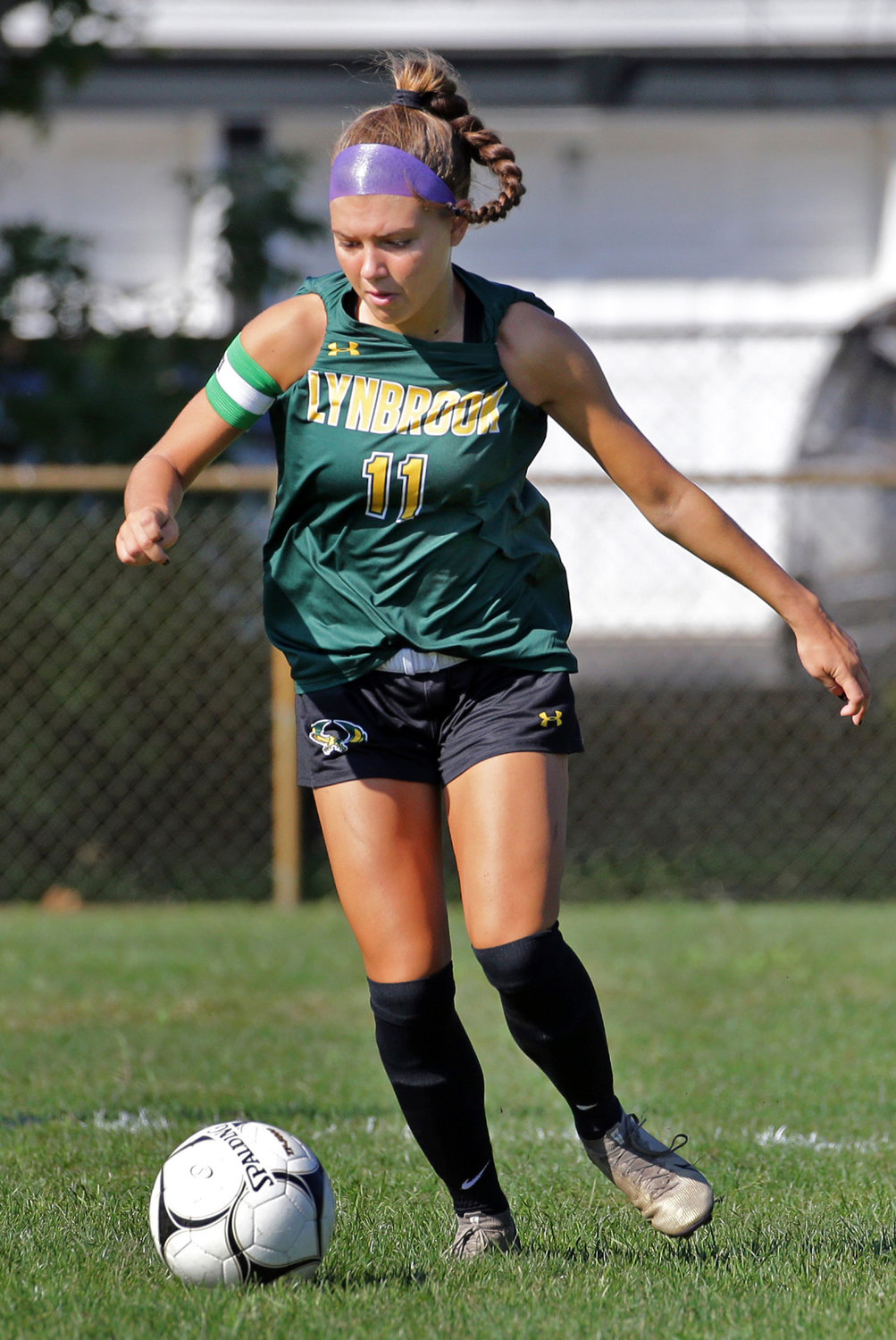 Senior Olivia Vuotto has been a catalyst for years for the Owls, who made great strides this fall and hope to make noise in the Nassau Class A playoffs.
Brian Ballweg/Herald
By Jamie deJong

Following a disappointing 2020 campaign which resulted in relegation, the Lynbrook girls’ soccer team has bounce backed in tremendous fashion this fall. It finished with a 7-3-2 record in Conference A3, and clinched a spot in the Nassau Class A playoffs.
There was a plethora of ways the season could have gone awry in the early going. The Owls were a little slow coming out of the gates, which was represented by a loss to Friends Academy. Not to mention starting keeper Keziah Job, one of only five seniors on the roster, left that game and missed two weeks with a concussion. Coach Mike Palumbo said he’s proud of the progressions they have made.
“They’re playing and working with so much heart,” Palumbo said. “The five seniors I have are constantly talking about the heart that this young group has played with.”
Junior Sara Cilinger and sophomore Katie Sharkey have exemplified this mantra, as they both stepped up in tandem to play keeper despite having negligible experience in net. Olivia Vuotto and Isabella Sanchez also made huge strides in leadership, as they were two of the most vocal following the bumpy beginning.
“Those two captains vocalized to the team that it’s now or never,” Palumbo said. “They kind of put the team on their shoulders to lead us forward.”


Perhaps the best representation of this course correction was Lynbrook’s recent five-game winning streak. Tyla Vuotto led the scoring attack during the stretch with 8 goals. Her sister Olivia Vuotto had 7 assists and 3 goals during the same timeframe. Isabella Sanchez was instrumental in setting the tone in the backend, as her commitment to man-marking the oppositions best striker was a major catalyst in Lynbrook’s stout goal prevention. The team only allowed 2 goals in those 5 games.
While the boxscores may insinuate a different conclusion, Palumbo believes it was the team’s 2-1 victory at Long Beach on Oct. 6 that symbolized its transformation.
“In that Long Beach game, they thought they were going to have our number,” Palumbo said. “In that game, the entire time team just jelled and connected on the all the things we had been working on in practice.”
The streak ended when they lost 2-1 against conference champion Friends Academy, even though the game ended. The match began 30 minutes late and was called with 10 minutes to play due to darkness. Still, this game was an example of the progress Lynbrook made, as this was certainly more competitive than the 7-2 loss to the Quakers earlier in the season.
“I thought we were playing excellent up to that point and had a good chance to tie it up in those 10 minutes,” Palumbo said. “It was definitely bittersweet to have to go out that way.”
The Owls have already secured a spot in the upcoming playoffs. They will start their postseason campaign in a play-in game against Floral Park on Wednesday, after press time, on the road.