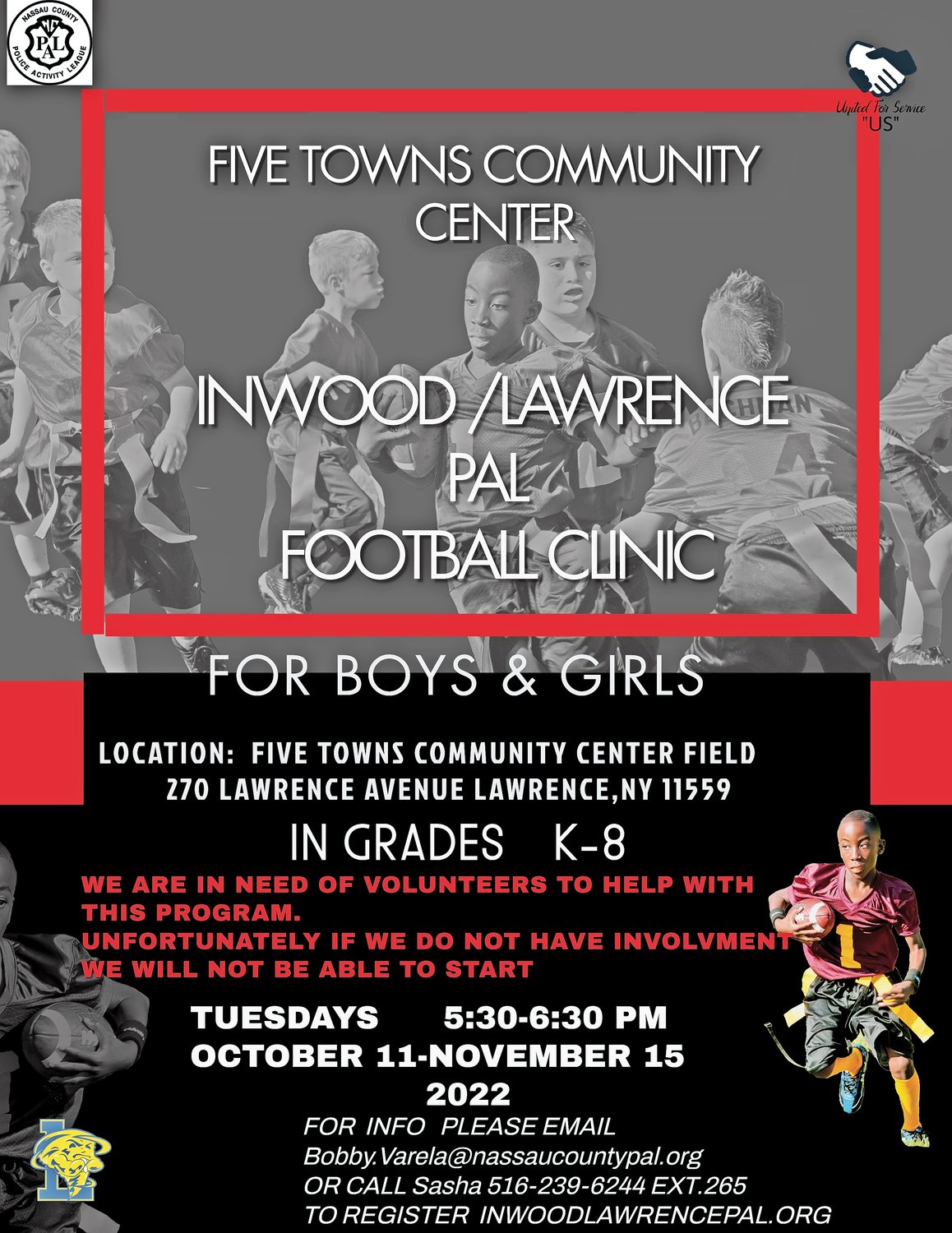 Football clinics aim to teach youngsters in the Lawrence School District the rudiments of the sport.
5TCC

Kids no longer get a head start at learning the rules and regulations.”
Danny Amaya, Middle school coach

Iwent to Lawrence myself and played football at Lawrence, and they have a rich history of football.”
Ilyasha Shivers, Middle school team assistant
By Kepherd Daniel

But Lawrence’s last appearance in the Long Island championship was a 54-26 loss to Westhampton High School in 2017. So far this season, the team is 1-3.

The Golden Tornadoes are looking to rebound, however, and that begins with a strong foundation. The school district’s new athletic director is Jason Supple, who was the varsity football coach until July 12, when Pat Palleschi took over, and the junior varsity coach, Frank Manara Sr., and middle school coach, 23-year-old Danny Amaya, are willing to do the heavy lifting that needs to done.

“Due to the lack of a starter program or Pee Wee league, there has been a decline in the knowledge of basic fundamentals in many sports. Football being one of them,” Amaya wrote in an email. “Kids no longer get a head start at learning the rules and regulations.”

Football has taken a backseat in the community since the Inwood Buccaneers Athletic Club went dormant in 2018. “Since the discontinuation of the program, there has been a lack of interest in football,” said Amaya, a 2017 Lawrence High graduate who played Buccaneer youth football. “The sense of community and family that (was) generated and thrived from the Inwood Buccaneers was something many families and locals will forever cherish and remember.”

Middle school football was brought back two years ago, and many seventh- and eighth-graders are playing the sport and competing against other teams. The middle school squad is called the Lions.

Inwood resident Ilyasha Shivers, a graduate of Lawrence High, and Tom Trento, are Amaya’s assistant coaches. “This is the second year I’ve been coaching at the middle school, and it’s just been a struggle and kind of almost like an uphill battle,” Shivers said. “We’re always facing adversity.”

“Even though we’re compensated for our time, we don’t do it for the money,” Shivers added. “I went to Lawrence myself and played football at Lawrence, and they have a rich history of football.

We’re really trying to bring back the history, the tradition, and it seems that every time we turn around, there’s some other obstacle that we have to overcome.”

Along with the lack of a community youth program, the middle school players don’t always get to play games because of a lack of referees, a national issue similar to the school bus driver shortage that impacts local school districts.

While many middle school players are playing football for the first time, Amaya said he saw glimpses of progress in every game over the past few years.

“There has been a surge of Lawrence alumni coming to give back, and help not only keep the culture alive, but re-ignite the fire,” he said, noting that there are parents who cook breakfast for the varsity team before Saturday games, and then man the grill and serve food and beverages during the games.

Amaya said that having another former Lawrence High player, Supple, at the helm as district athletic director gives the football program a more optimistic outlook. “He has helped myself and my staff every step of the way,” Amaya said. “He has been seen at games cheering on the teams and aiding in supervision, but the work he’s done behind the scenes doesn’t get enough credit. We’re very luck to have him in our corner.”

There has also been more support from the community: Once again this year, the Inwood/Lawrence Police Activity League will host a football clinic at the Five Towns Community Center, in Lawrence, for players. The clinic begins Oct. 11.

Supple said that the school district is working on generating more interest in the middle school football team, and applauded the coaches for their efforts.

“We’re working with PAL and running clinics to generate interest,” he said. “I think our coaches do a great job getting the most out of the kids. For a lot of the kids, this is their first time playing football.”

Amaya said he believes strongly that a positive sports environment can enrich the lives of its participants, building friendships, helping young people develop socialization skills and teaching discipline and what he called “life principles.”