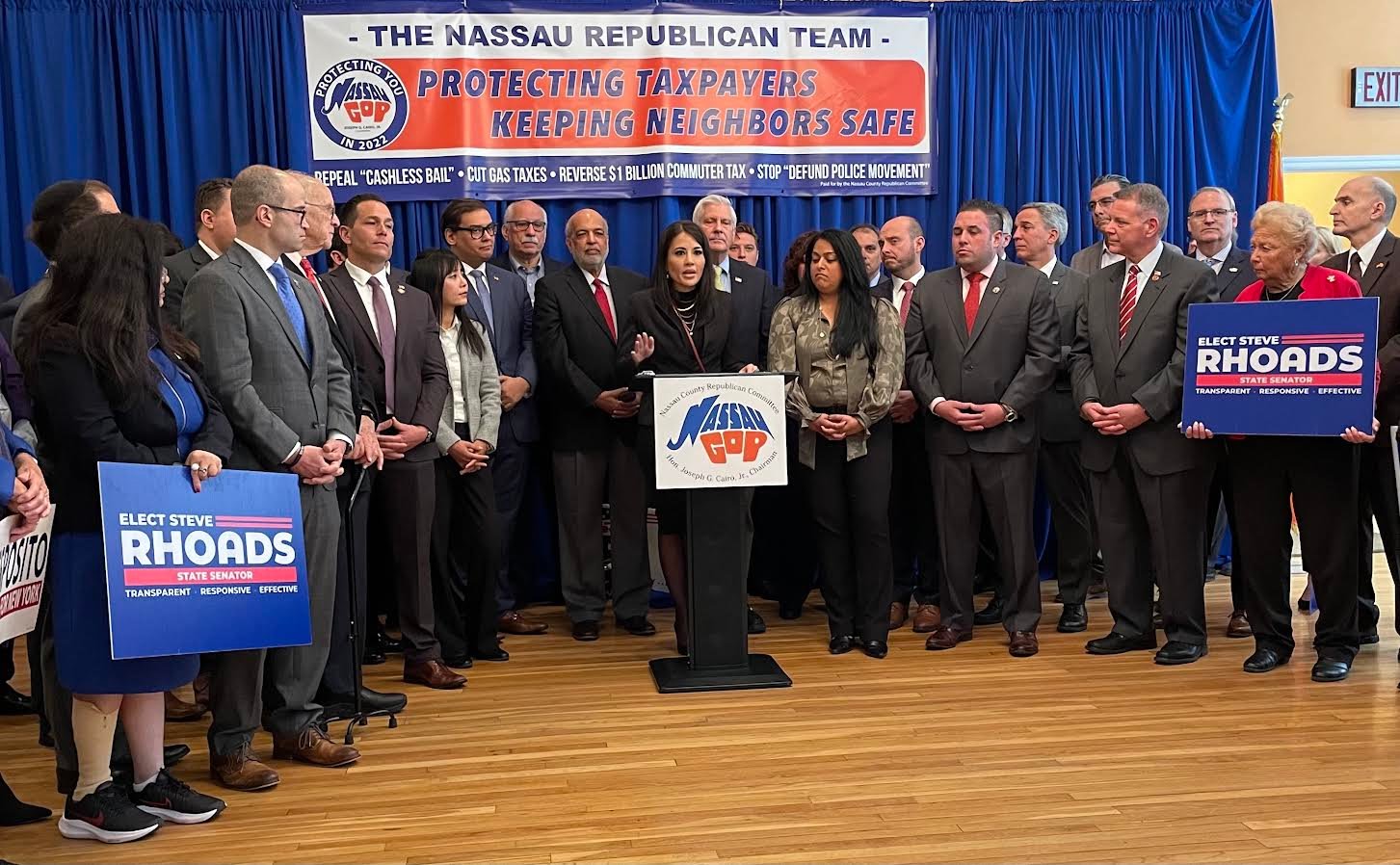 Republican candidates for state and federal officers gathered at GOP headquarters in Westbury on March 25 for a kickoff to the fall campaign.
Courtesy Nassau County Republican Party
By James Bernstein

Republicans said they feel particularly optimistic about their chances in this fall’s elections, given high gas and food prices, increasing crime in major cities, mainly in New York, and the low popularity of President Biden.

“We are going to have a tremendous victory this year,” said Nassau’s new county executive, Bruce Blakeman, who introduced the candidates to an assembled media. “People are living paycheck-to-paycheck. They can’t afford gasoline. People are realizing we are the answer to their problems, not the Democrat Party.”

The top of the list candidates was Anthony D’Esposito, a Hempstead Town councilman who is seeking to replace U.S. Rep Kathleen Rice, a Democrat, who has announced she is not seeking re-election this year.

But the race for Rice’s 4th CD seat is crowded. Former Hempstead Town Supervisor Laura Gillen, Nassau County Legislators Siela Bynoe and Carrié Solages, and Keith Corbett, the mayor of the village of Malverne – all Democrats – are also running to replace Rice.

D’Esposito said, “I’m proud to be a part of a team that is going to change the direction of the state of New York. “Stores and restaurants are having a tough time. Crime is through the roof. “ D’Esposito said his campaign would focus on the issue of crime and improving “quality of life.”

Jack Martins, a former mayor of the village of Mineola and a former state senator, is seeking another shot at his senate seat, challenging Democrat incumbent Anna Kaplan of Great Neck.

“People as me why I am running again,” Martins said. “I was in the Senate and when I was there I had balance and comprise.” Those qualities are no longer there, he said.

Assemblyman Edward Ra, ranking member of the assembly’s Ways and Means Committee, is seeking re-election. Ra said he wanted to rid the state assembly of it “socialist members.”

Other Republicans running for Congress whose districts include a portion of Nassau County are Andrew Garbarino, George Santos, Nick LaLota and Paul King.

“I talk to a lot of people in the district,” said D’Esposito, a retired New York City police detective. “They are fed up. People can’t put food on the table. They feel the country is off-track.” In an interview later, D’Esposito stressed the importance of reducing crime and improving “quality of life.”

In response, Nassau County Democratic Party chairman Jay Jacobs said in an email, “The Nassau Republican slate is running on a platform to “fix the broken economy” that has a record-breaking GDP growth of 5.7%, added 7 million jobs, bringing unemployment down to 3.8% all while reducing the Trump budget deficit by $360 billion since Joe Biden took office."

Jacobs said the Republicans know that no Democrat running in Nassau (or anywhere else that I can find) supports “Defund the Police.”  "Yet, they cling to it along with “Bail Reform” as if they are the causes of increased crime – when all the data proves otherwise," he wrote. "The uptick in violent crime is a nationwide problem and among the two greatest causes are gun violence and a lack of funding for mental health.  Republicans continue to do nothing to control the influx of guns and wear mental health budget cuts as a badge of honor. "