Putting a halt to intolerance 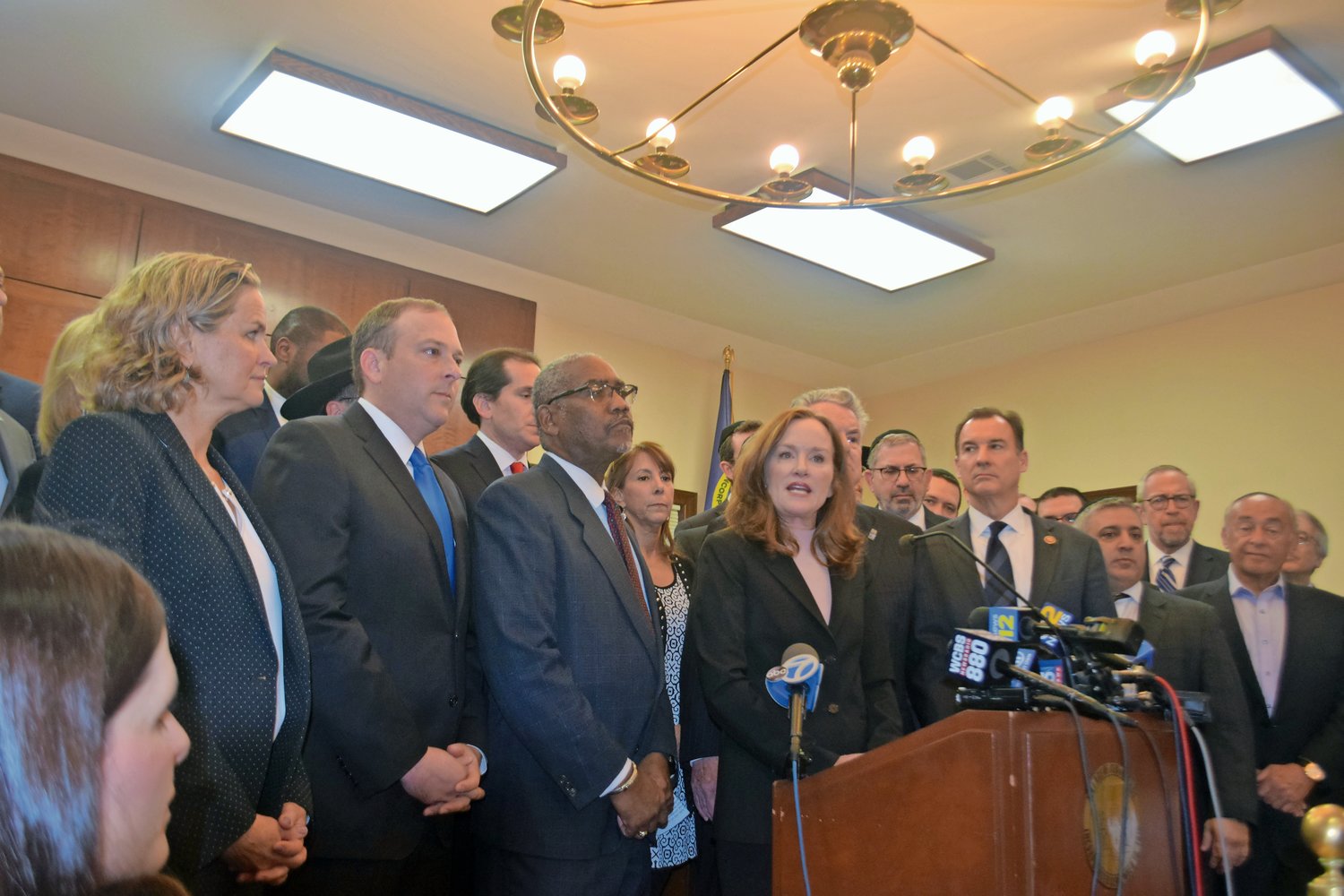 U.S. Rep. Kathleen Rice, at lectern, led the Long Island congressional delegation and many other elected and appointed officials in showing a united front against anti-Semitism on Jan. 3.
Jeffrey Bessen/Herald
By Jeff Bessen and Nakeem Grant

There have been 13 anti-Semitic incidents in New York since Dec. 8. On that Sunday, a Queens man verbally abused and physically threatened three Jewish people in the North Lawrence Costco, including an 11-year-old. Two days later, at a kosher grocery store in Jersey City, a shooting left three victims dead. On Dec. 28, a machete-wielding man stabbed five people at a Hanukkah party at a rabbi’s house in upstate Monsey.

“It’s frightening  . . . and it saddens me that there’s so much hate out there in the world,” said Rabbi Susan Elkodsi, spiritual leader of the Malverne Jewish Center. “Anti-Semitism isn’t new, but we need to figure out how to be proud to be Jewish and not let fear drive us underground.”

As a member of the Western Nassau chapter of the Sisterhood of Salaam Shalom — a group that aims to build relationships among Jewish and Muslim women while combating hate and prejudice — Elkodsi said that it’s imperative to continue making those connections in times like this. She also said that while the MJC has increased safety measures in recent years, vigilance is key.

“The important thing is to understand that we have work to do in creating relationships with others in our communities,” she said.

At Congregation Shaaray Shalom in West Hempstead, the synagogue created a security committee over a year ago that meets on a monthly basis. In conjunction with the Nassau County Police Department, the synagogue has also held training sessions on emergency situations. Shaaray Shalom spiritual leader Rabbi Art Vernon said, however, that the increased anxiety among the Jewish population is understandable.

“The attacks are egregious, they’re outlandish and it’s understandable to have a sense of fear and trepidation,” Vernon said. “Having said that, these acts don’t represent a fundamental change in the values of American society.”

In the days following the recent incidents, Vernon said that he received expressions of support from spiritual leaders from the non-Jewish community. “Our neighbors know what’s going on,” Vernon said. “It’s very easy for a variety of reasons for Jews to feel like they’re alone. But our fellow citizens from other faith communities are standing in solidarity with us.”

Federal and state officials have also spoken out against the recent attacks on Jewish people. U.S. Rep Kathleen Rice, a Democrat who represents Malverne and West Hempstead, was one of several officials to address this during a news conference in Cedarhurst on Jan. 3.

She noted that through the federal nonprofit security grant program, $1.7 million for 17 Jewish organizations, synagogues and schools in the 4th Congressional District was secured in 2019. Along with that, $75 million could be available nationwide if President Donald Trump signs the Strengthen Security Act Against Terrorism bill that passed both the House and Senate.

“We also must address the issue at the root cause by stopping the spread of hate and intolerance,” Rice said. “In a very short period of time there will be no Holocaust survivors. We have to make sure that their stories live beyond than. Education is the best tool we have for history not repeating itself.”

State Sen. Todd Kaminsky said that it’s up to government officials to step up and address anti-Semitism. “If we all don’t come together and stand up who will?” Kaminsky said. “And to think in 2019 and 2020, you have to question whether you could walk down the street wearing a yarmulke or whether you could go to temple and pray and come home OK or whether you could send your kids to yeshiva or any religious school and worry about their safety is absolutely stunning and breathtaking.”