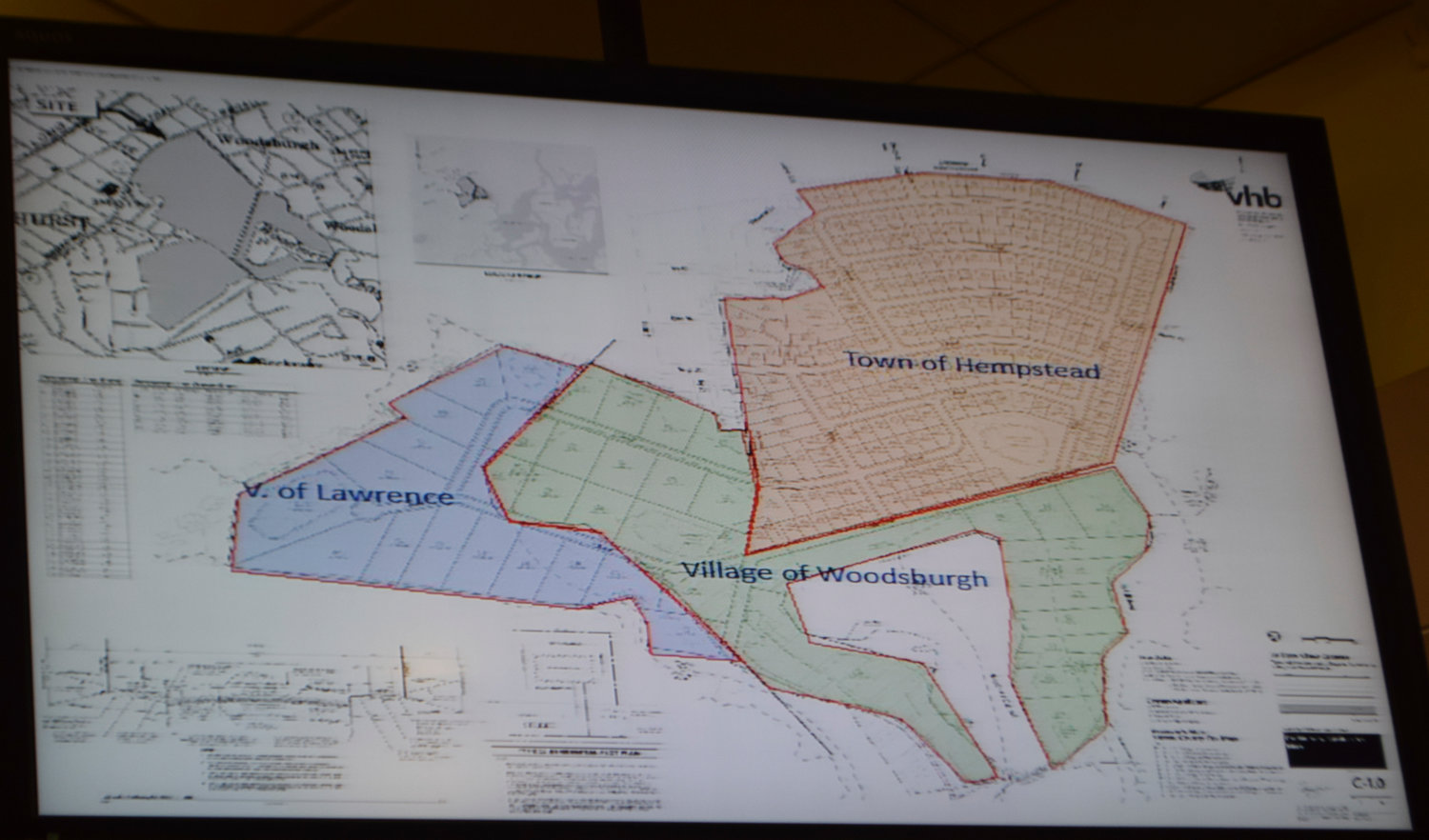 The proposed development plan outlining where the planned 285 single-family homes of Willow View Estates would be.
Jeffrey Bessen/Herald 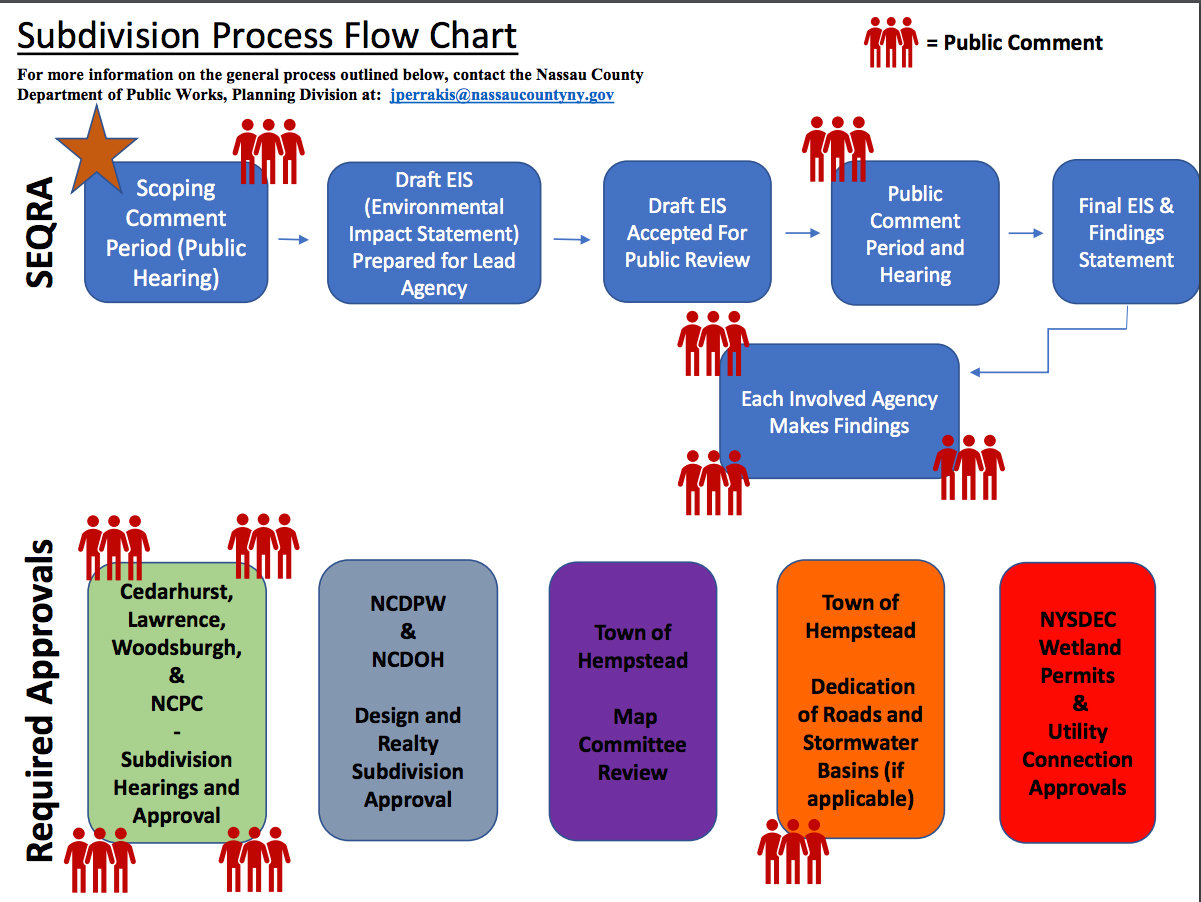 The flow chart outlines the subdivision process in Nassau County. People images indicate when public comment is requested.
Jeffrey Bessen/Herald
Previous Next
What the elected and appointed officials said

Town of Hempstead Supervisor Laura Gillen: “I would also like to explore with the county, the use of open space preservation funds to see if there is an opportunity to create a greenbelt to ensure and enhance the quality of life for the residents who live in this area.”

Nassau County Legislator Denise Ford: “I firmly believe that if you actually take a look at this and what is being proposed that it will cause a lot of problems, especially for police and firemen who are responding to any type of emergency calls.”

Nassau County Legislator Howard Kopel: “If you increase the congestion on Broadway much more than it is now, we’ve got a terrible situation.

Town Councilman Anthony D’Esposito: We all understand what is before you and we understand there are no decisions being made tonight, but let’s just be very clear and understanding what a devastating effect the proposal in front of you will have on these communities.”

Cedarhurst Trustee Ari Brown: “I can’t even imagine what’s going to happen with a couple hundred more homes, 800, a 1,000 more people … you can’t drive down Broadway. It’s going to affect my residents as well as the residents in the Five Towns.”

Lawrence Village Administrator Ron Goldman: “We provided you with materials that we believe will convince you that the study thus far is sadly somewhat inadequate.”

Traffic volume, the decline of open space and the impact on the environment were the primary concerns for nearly every one of the 35 speakers at the Nassau County Department of Public Works Planning Commission “scoping” session on June 26.

The scoping session was for the commissioners to hear public comment on the proposed development of the Woodmere Club that currently includes 285 single-family homes to be built on 114.25 acres of the 111-year-old club’s 118 acres. The planned development is called Willow View Estates. All but 37 of the homes would be built in Woodmere; 24 would be in Woodsburgh and 13 in Lawrence. The property also extends to within 300 feet of Cedarhurst village. Approval is required from each municipality.

After all the public comment is collected, the planning commission will then draft the environmental impact statement in the coming months as part of the State Environmental Quality Review Act, which requires government to consider environmental impacts of such projects as well as social and economic factors.

Backed by several community Facebook posts, four emails and one full-page ad in the Nassau Herald the Five Towns Civic Association and the Lawrence Association implored residents to attend the Wednesday hearing in the county’s legislative chamber in Mineola.

“It’s not just Broadway, it’s not just Central, it’s not just Peninsula Boulevard, it’s the little streets that feed them,” said Mario Alex Joseph, co-president of the Five Towns Civic Association. “Each one of those streets represents, a mini community, if you will, with homes and the families on them.” Joseph noted that the traffic is not just an “inconvenience, it’s a danger,” especially when taking people to a hospital.

The potential loss of open space, which in turn would most likely increase flooding after a heavy rain or a major storm such as a hurricane, and the impact on the environment, including animal and plant life in the area were also concerns addressed by the speakers.

Lawrence resident Dr. Allan Simon noted his concern about the flora and fauna, with humor. “I am a veterinarian, therefore I can talk to the animals,” Simon said. “I saw a tortoise crossing the road and I picked up to make sure he was safe, and he told me his friends want to be safe too.

Many of the residents’ comments were aligned with Lawrence Association Paris Popack who railed against the loss of the community’s quality of life. “This is threat to residents of the Five Towns and beyond,” she said, also noting the traffic issue, the impact of resources and the loss of open space.

Arthur Karp, of Woodmere, was the sole project supporter. “I would like to see development,” he said, adding that the increases in traffic, especially school buses is only an assumption. He supported the concept eminent domain and having the town buy some of the land for a park and said tolls on West Broadway would help pay for infrastructure upgrades.

Town of Hempstead Supervisor Laura Gillen asked the planning commission to hold off on “making any final decisions on the scope of the DEIS (draft environmental impact statement), and any further actions towards evaluating the subdivision until the town has been able to take the necessary steps,” she said, referring to the town studies — a proposing rezoning of the land and a special park district — and the Army Corps of Engineers Back Bay study.

At a June 12 meeting in Freeport, Scott Sanderson, section chief of coastal planning for the U.S. Army Corps of Engineers, Philadelphia District, said the Army Corps needs more time — three years — to develop plans before installing any flood-mitigation measures, and an additional $3 million. So the completion date is now 2022, not 2020 as originally anticipated.