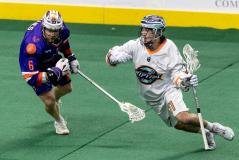 The news reaffirms the team’s commitment to Long Island as the building's main tenant and will keep it in Nassau County for the foreseeable future.

“Our organization is proud to continue our long-term commitment to Long Island, and specifically the growth of the game at the grassroots level,” GF Sports and Entertainment Vice President Rich Lisk said. “Nassau Coliseum gives us the best opportunity to play championship lacrosse, grow the local community, and be an outstanding source of fan entertainment so we are thrilled to continue our relationship with them.”

The Riptide open its third NLL campaign at Nassau Coliseum against the San Diego Seals on Saturday, Dec. 3 at 7:30 p.m. ET, and will play eight additional home games, from Dec. 17 through March 25. Fans can view the entire schedule at newyorkriptide.com/schedule.

“We are honored to be a part of the Riptide commitment to the community of Long Island as they have become an integral part of our building and community,” Joe Zino, Nassau Coliseum Executive Vice President and General Manager said. “Nassau Coliseum is the perfect stage to highlight the sport of lacrosse with the Riptide organization in our iconic venue.”

Ladouceur said anything less than a playoff berth this season would be considered disappointing. “Everyone within the organization is thinking playoffs, and once you get to the playoffs anything can happen,” he said.

“I thought Jim did a great job addressing needs,” Ladouceur said of Veltman. “It’s an exciting roster and we’re looking to get off to a much better start than last season.”

The 2021-22 campaign featured plenty of highlights, led by NLL Rookie of the Year Teat’s dynamic debut. Teat compiled 108 points on 37 goals and 71 assists in 16 games after being selected first overall in the 2020 NLL Entry Draft. He finished fourth in the NLL in points, and third in assists.

There was also the emergence of rookie goaltender Steve Orleman, who broke the NLL rookie record for minutes and finished fifth overall with just under 987 minutes played and sixth in saves with 656.

“We all have the trust and faith in him,” Ladouceur said of Orleman. “Now the question becomes, ‘can he pick up where he left off?.’ We sure think he can.”

Riptide season Ticket Memberships are on sale now and are the best way to enjoy the Riptide at an unbeatable price. Benefits include an exclusive post game meet and greet with team, player clinics on the Nassau Coliseum turf, Free VIP parking, an exclusive season ticket member gift, a season ticket member merchandise sale, a flexible ticket exchange program so no tickets go unused and can be added to another game, and much more. Fans can head to newyorkriptide.com/seasonmemberships for all of the details.