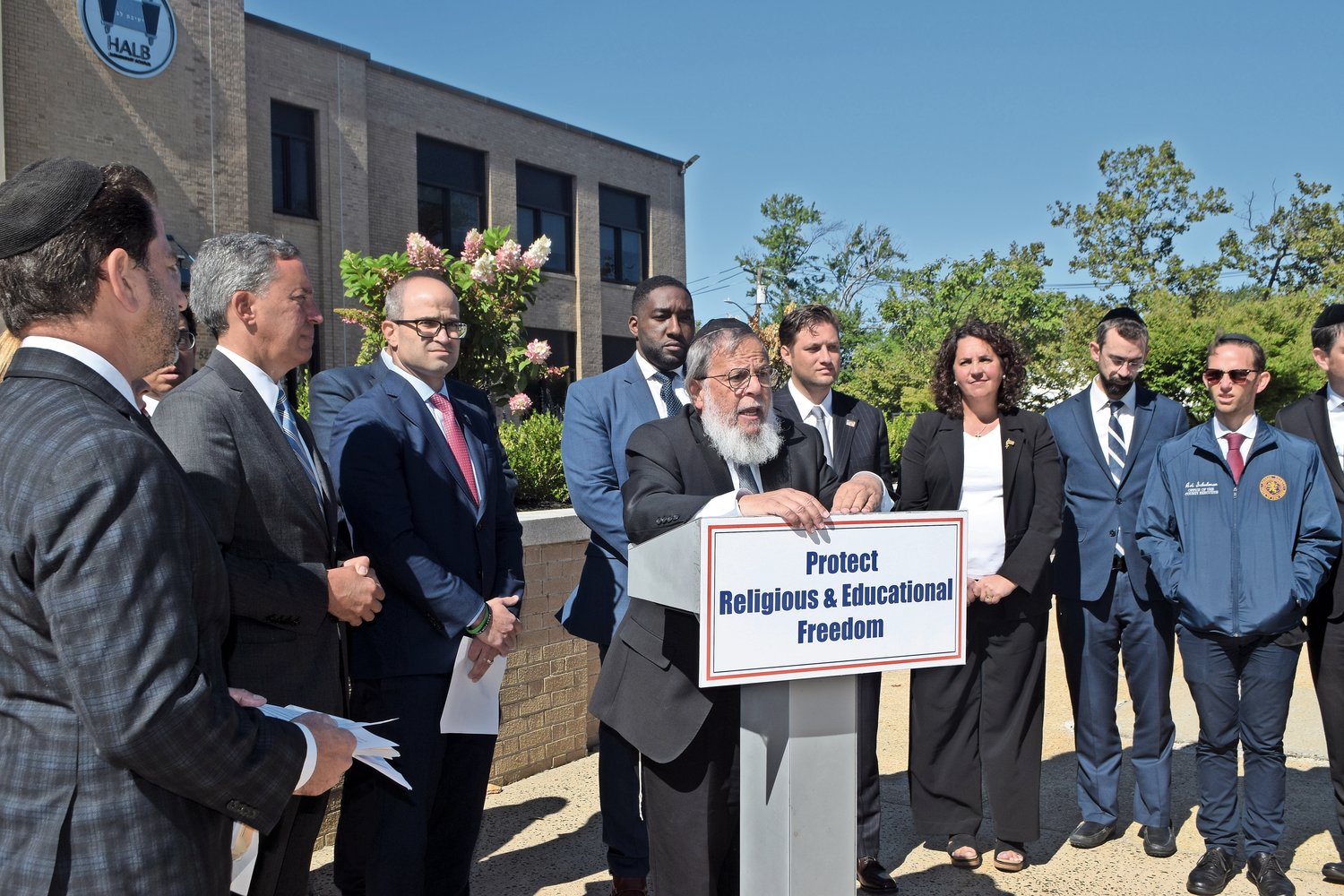 The gathering of a few Republican candidates, rabbis and yeshivas officials outside the Hebrew Academy of Long Beach in Woodmere on Sept. 22 was part GOP rally and part bashing the State Education Department for its approval of updating oversight of private schools.

A majority of the criticism was aimed at the state for what the officials see as meddling in the education of children attending Jewish schools egged on by a scathing New York Times report that showed a specific portion of yeshivas are not providing or giving short thrift to secular education.

Private schools need to be what is called “substantial equivalent” to public schools and offer the same secular education provided in public schools. The curriculum must also meet the state’s academic standards.

While state education has required substantial equivalency since 1865, the 21st century conversation took several years as a discrepancy between what certain nonpublic schools were doing compared to the public school concerning secular education.

Adrianne Mittan, executive director of all the schools under the HALB umbrella, was angered that the Times’ story chose to focus on the Jewish schools, while substantial equivalency should be applied to all private schools.

“I didn’t hear them speak about the thousands of Catholic or other parochial schools that are far superior than our average public school,” she said. “They chose to really make an antisemitic trope and focus on what I consider are snotty, little Jewish children. You can find snotty, children anywhere, not just in a Jewish school.”

Mittan also noted that the Times’ story did not focus on private schools Dalton, Horace Mann and Fieldston or even HALB, where education is equal to or could surpass public school education.

Rabbi Mordechai Kamentsky, dean of Yeshiva South Shore in Hewlett, also railed against the state’s meddling and the Times’ story that he thought besmirched yeshivas.

“Yes, in the Five Towns schools like this (HALB) and our yeshiva are award-winning educational institutions, and Darchei Torah in Far Rockaway is another one of the many, yes this community that is thriving,” he said. “What we want the state to understand is that community has a right to create the curriculum that the parents wants for their children.”

Public school districts are charged with assessing the educational quality of all the nonpublic schools within their boundaries. Mittan views this as intrusive.

Mittan said she foresees a future where private schools will have to hire staff to field these complaints and that is not what she wants to direct tuition money. She said she’s more open to discuss if money should go to STEM (science, technology engineering, math) education physical education.

Taking a political poke at the people on the other side of the aisle Assemblyman Ari Brown said: “Remember substantial equivalency is the bad wolf otherwise known as antisemitism, and the crimes that we see throughout our state and country are really the same just cloaked in sheep’s clothing, which goes by the name of fairness and equity.”