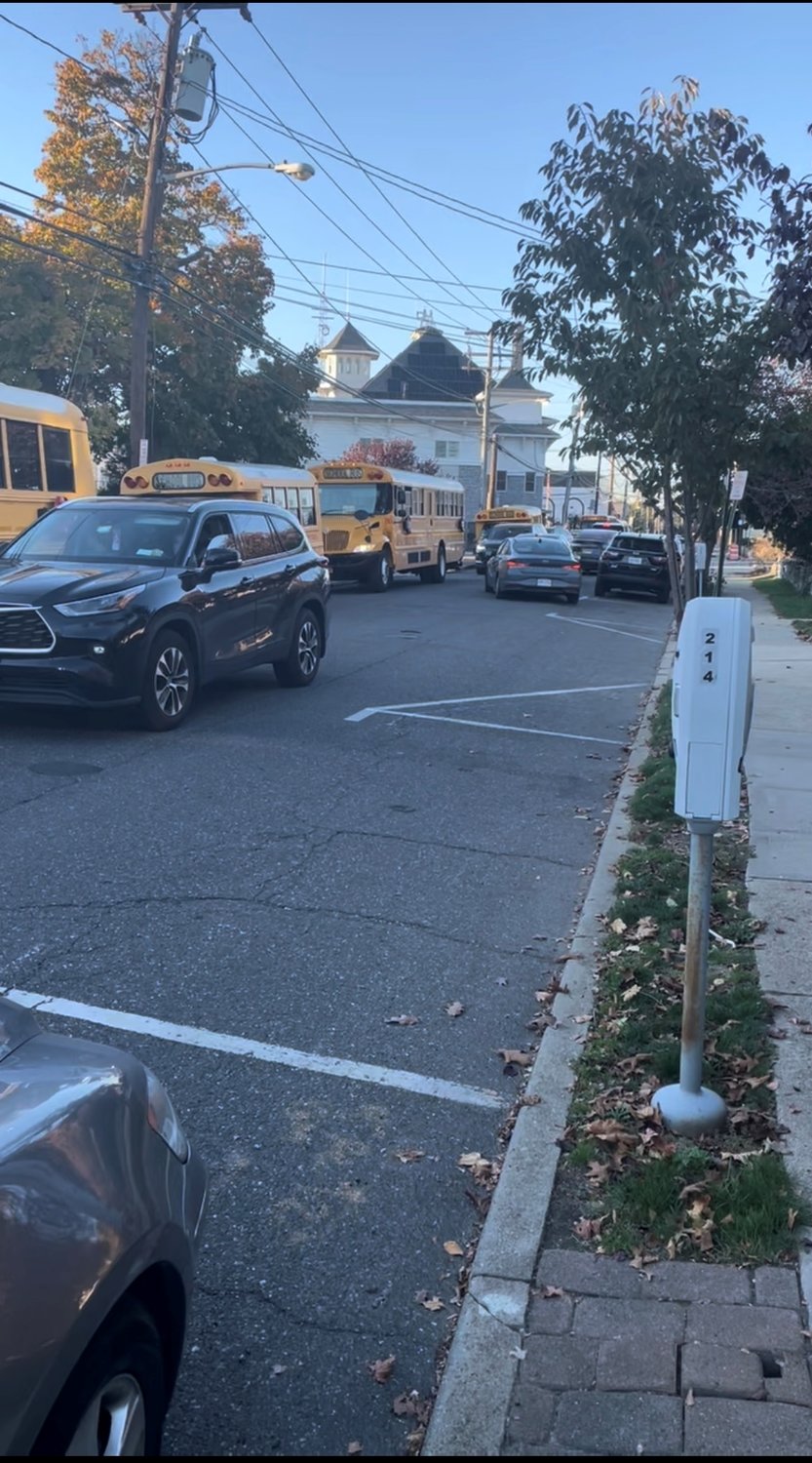 We do what we can to minimize our impact on the neighborhood.”
Ari Solomon Executive director, HAFTR
By Jeff Bessen

The volume of traffic across the Five Towns is much like the weather: Everybody talks about it, but nobody seems to be able to do much about it. Washington Avenue, which divides the villages of Cedarhurst and Lawrence, is a microcosm of the problem.

At the Nov. 10 Lawrence village board meeting, the issue came to the forefront, as Michael Hatten spoke on behalf of his fellow residents of Washington Avenue. Hatten, who has lived on the street for 25 years, said that on Nov. 9, at 3:30 p.m., he recorded “something in that neighborhood that happens all the time.”

In describing the video, Hatten, a Lawrence School District Board of Education trustee, said that bad traffic on Washington “is commonplace,” with school buses from the Hebrew Academy of the Five Towns and Rockaway clogging the roadway and, according to Hatten, turning a two-way street into a dangerous one-way street.

“I have personally witnessed ambulances trying to get out of the [Lawrence-Cedarhurst] firehouse, coming south to Lawrence, that have been stopped completely,” Hatten said. “That’s a safety issue for everyone who lives on my block, Washington Avenue, and everybody who lives in Lawrence. We all know that it’s moments that count in an emergency.”

In response, Lawrence Village Administrator Ron Goldman said the village had compared a dozen security camera recordings from HAFTR with the one that Hatten provided.

“And we have video showing that there has been no traffic on the thing [Washington Avenue] except (the Nov. 9 video),” Goldman aid. “We have reason to believe that neighbors were told to remove their cars from driveways (and) park on the Cedarhurst side street, so it would create just the kind of blockage that in fact occurred.”

In a phone conversation with the Herald, Hatten refuted Goldman’s claim, saying it [stemmed from] a “dopey comment” made by someone at one of several meetings Washington Avenue residents had, and that the idea had been “shut down.”

“For years there were signs on the Cedarhurst side that prevented parking during particular hours, and that facilitated the flow of traffic,” Goldman said, “thereby creating the lane for the buses and then two lanes to go up and down the street. When the signs were removed at the urging of one particular member of the Cedarhurst board of trustees … that has created the problem.”

Cedarhurst Deputy Mayor Ari Brown told the Herald that Hatten approached him in September about removing the parking signs. Brown said he alerted Hatten’s neighbors to the possible change on social media. The village approved the signs’ removal. Then, Brown said, he found out that removing the signs was part of what he called a “ruse.” He added that the Cedarhurst village board planned to discuss reinstalling the signs, and to call on Lawrence to enforce its parking rules.

Ari Solomon, HAFTR’s executive director, explained to the Herald that the afternoon pickup at the school that was recorded by Hatten lasts 15 to 20 minutes, and that traffic volume reduced by having a majority of the vehicle pickups go through what he called “the school’s depot.”

Solomon noted that five schools in the immediate dismiss students at around the same time: the Brandeis Academy, HAFTR, Mesivta Ateres Yaakvov High School and two new schools, Bais Yaakov Five Towns and Yesivath Gesher, Both of which occupy the former Rambam Mesivta High School building. “We do what we can to minimize our impact on the neighborhood and for the safety of our children,” Solomon said.

That section of Washington Avenue, between Central Avenue and Broadway, two main Five Towns arteries, is a heavily traveled roadway. “People are very, very nervous — it’s dangerous,” Lawrence resident Rochelle Kevelson said at the Nov. 10 meeting about the traffic. “We have a school, we have a synagogue, there is traffic and there is going to be the building of 17 apartments,” she added, referring to a proposed residential development at 68 Washington that was set to go before the Cedarhurst Board of Zoning Appeals for a variance request on Tuesday, as the Herald went to press. “The street is going to be filled with construction. How is anybody going to get through?”

Though Goldman insisted that substantial portions of Hatten’s presentation were not accurate, Lawrence Mayor Alex Edelman said that the village would speak with Cedarhurst officials to “see what can be done to rectify the situation as much as we can.”

Have an opinion on Five Towns traffic issues? Send a letter to jbessen@liherald.com.