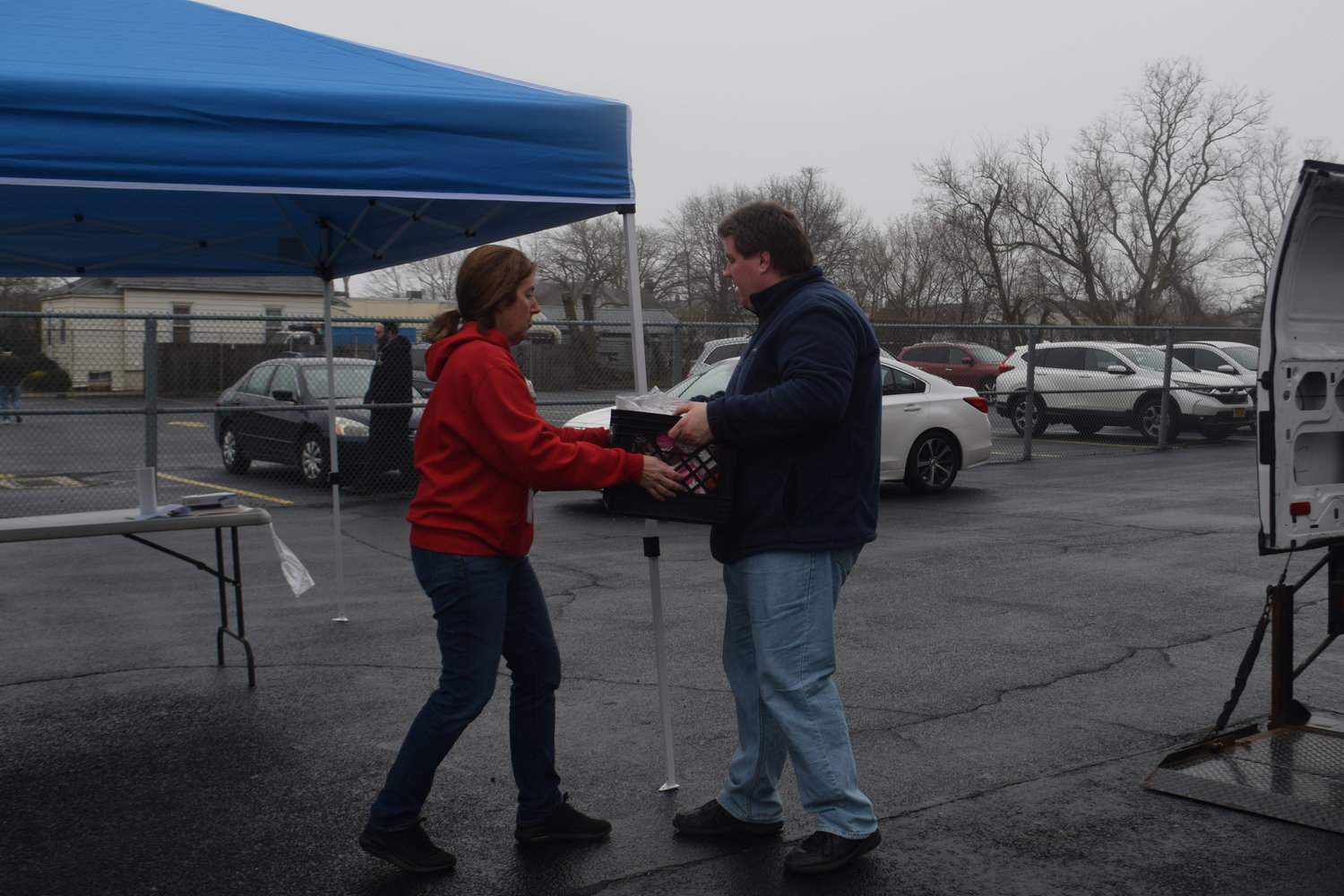 Whitsons General Manager Beth Drayer and driver Paul O'Malley unloaded the breakfast and lunch meals that were distributed at the Number Two School in Inwood on March 20.
Jeffrey Bessen/Herald 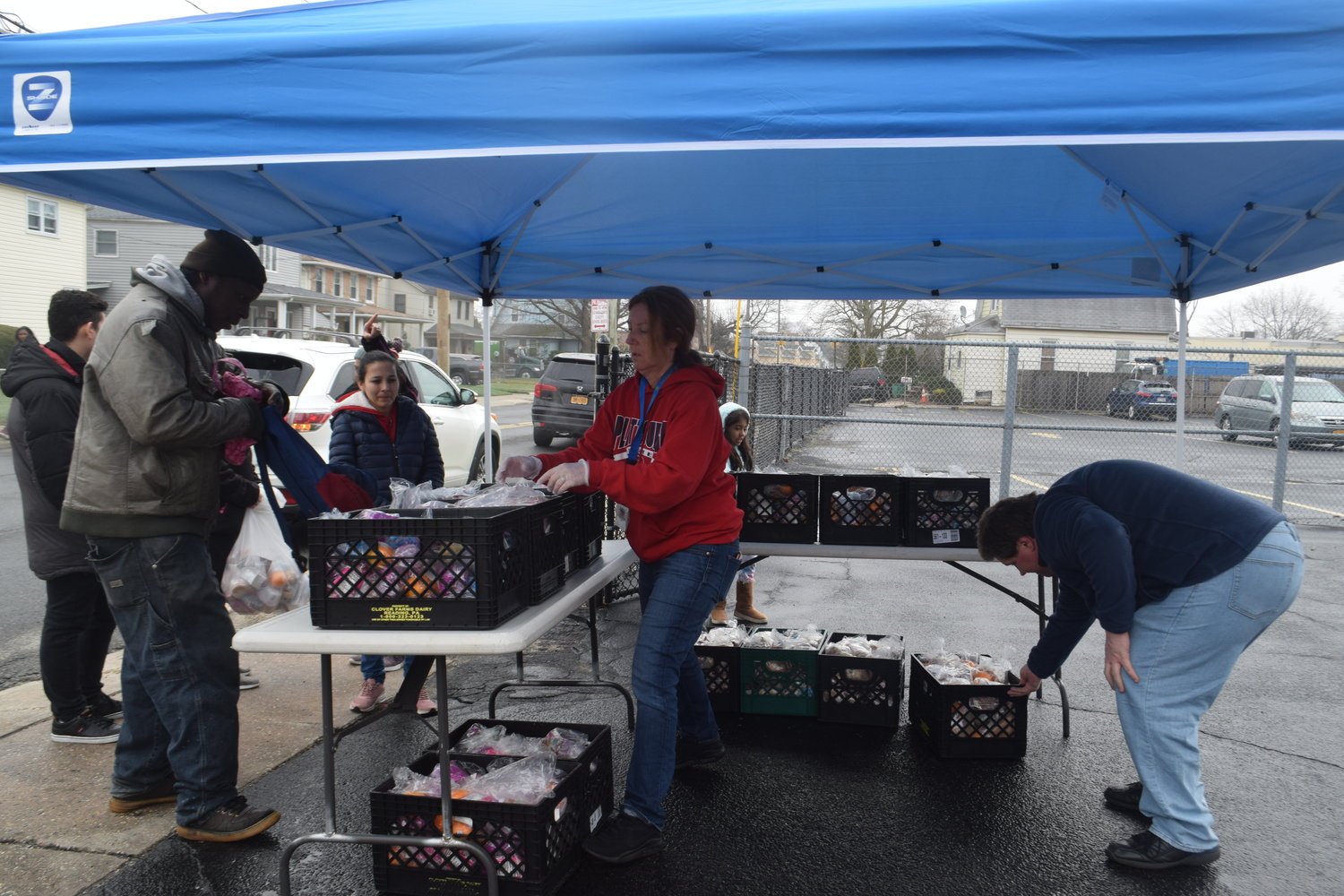 Breakfast and lunch for three days, Friday, Saturday and Sunday, were distributed to Lawrence School District families on March 20.
Jeffrey Bessen/Herald
Previous Next
By Jeff Bessen

The van pulled into the area near a blue tent sent up over two tables at Lawrence UPK at the Number Two School in Inwood on March 18, and Whitsons Culinary Group General Manager Beth Drayer and driver Paul O’Malley unloaded the packed crates filled with breakfast and lunch for three days: Friday, Saturday and Sunday. Islandia-based Whitsons provides the food for Lawrence schools.

At 9 a.m., Drayer bagged the needed number of meals as Lawrence School District residents with children in tow lined up to collect the food. Breakfasts included cereal and fruit, and lunches, chicken patties and yogurt. There was also apple juice, milk water.

“We will be doing this indefinitely until we’re told no more,” Drayer said, adding that 1,200 meals were being distributed. Meals were also distributed at the Number Four School, also in Inwood. That number rose to 1,800, Assistant Superintendent for Operations Jeremy Feder said later on March 20.

Amid the coronavirus outbreak, all schools across New York state are closed at least through April 1. Both Hewlett-Woodmere and Lawrence schools are distributing the federally supported meals that would have been handed out and eaten if school was open. Hewlett-Woodmere district meals are being distributed at the high school from  11 a.m. to 1 p.m., with pickup at a drive-through window. The entrance is through East Rockaway Road.

Seventy-eight percent of the roughly 2,800 students in the Lawrence district receive meals daily during the school week. On March 18, the first day of distribution, Lawrence Superintendent D. Ann Pedersen said that 168 lunches were handed out at the Number Two school and 86 at the Lawrence Primary School at the Number Four School, also in Inwood.

Lawrence Middle School eighth-grader Emelin Flores was picking up the meals for her family, which includes four children. The meals "help the community,” the young Inwood resident said. “It makes it easier.” She added that that the impact of the health crisis on her and her peers is simple: “No education.”

At the Five Towns Community Center in Lawrence, Inwood resident Sasha Young posted on local Facebook group pages on March 18 that there were was a limited amount of frozen yogurt mix, bread and cleaning supplies, including bleach.

Young said on March 19 and 20, “a small group of volunteers bagged our remaining items to distribute to our 50 most in need families at Gammy’s Pantry. We contacted our families and dropped emergency bags to those most in need and in danger of not having food for the family for the next three days.” Along with Gammy’s Pantry, a donation place set up by Young and Cedarhurst-based Rock and Wrap IT Up!, run by Syd Mandelbaum, also dropped off items.

“Just making sure to do our part,” Young said. “At this time, it is essential to band together to ensure the stability of our community members most in need ... We are in need of donations and can always utilize volunteers.”

The Community Center is at 270 Lawrence Ave.