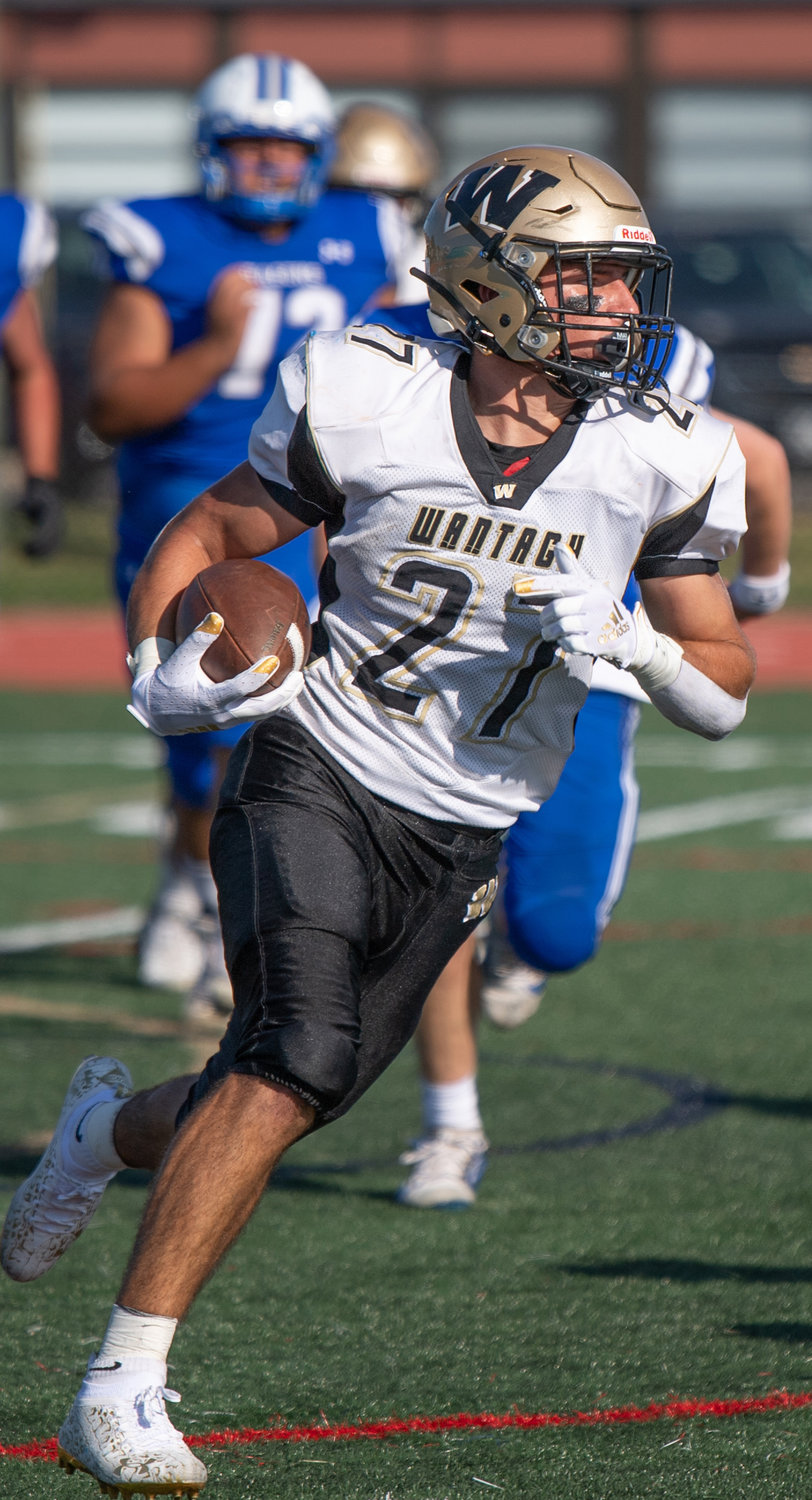 Senior Tyler Martini (eight touchdowns) has rushed for at least 130 yards in each of undefeated Wantagh's first five games, including 219 versus Bethpage.
Media Origin Inc./Herald
By Andrew Coen

Momentum from the Wantagh football team’s Conference IV title run in the spring has carried over to the fall in a new league.
The Warriors, who moved up to Conference III due to rising enrollment, have opened the new campaign with a 5-0 start and outscoring opponents 166 to 20. Longtime head coach Keith Sachs said the experience his young team gained during the shortened spring campaign that culminated with a county title upset win at North Shore is now paying dividends for his more experienced group this season.
“We returned a lot of starters and last year was sort of an abbreviated version of everything where we had a lot of new players and we kind of overachieved for being young and having fall football and spring football so close together and a lot of guys returning, it just enabled us to do a lot more,” Sachs said. “We’re getting better each week.”
Wantagh stayed unbeaten last Saturday with a 28-0 home win against South Side in which Mark Maniet rushed for 122 yards with two touchdowns and Tyler Martini amassed 134 yards with one score. Martini has eight touchdowns on the season. The defense was also dominating with eight sacks led by five from defensive lineman Nick Aldino.
The victory over South Side followed a commanding 42-0 win in at Division in which Martini rushed for 135 yards and two touchdowns on just nine carries. He ran for 187 yards and three touchdowns on just seven carries the previous week in a 42-7 victory against Hewlett and 219 yards in Wantagh’s 20-13 win at Bethpage on Sept. 18.


Wantagh boasts plenty of depth in the backfield between Martini, Mainet, Sean Carlo and Nick Cupelli. Sachs credits the strong explosive ground game in large part to his offensive line of Liam Casey, Antony Tsakos, Rich Benkovic and Aldino along with tight end Luke Janosko.
Sachs is also pleased with progress in the passing game with junior quarterback Joe Legovich, who completed 6-of-7 attempts for 110 yards in the Division win. He said he hopes for more strides in the passing offense to help add mover versatility with its rushing attack.
The defense has been dominant all season with the starters only allowing two touchdowns through five games. Sachs said the strength of the defense is upfront with Casey at middle linebacker leading the way after an All-County junior season.
“We are trying to develop the passing game that so that teams can’t defend us with just one dimension,” Sachs said. “We feel like we have a good passing game that is only going to get better and better and it is going to be a great complement to what is already a good running game.”
After hosting Manhasset this Saturday for a 2 p.m. kickoff, Wantagh returns home a week later to face unbeaten Plainedge in a game that will likely decide the top seed for the upcoming Conference III playoffs. The Warriors close the regular season Oct. 30 at Floral Park.