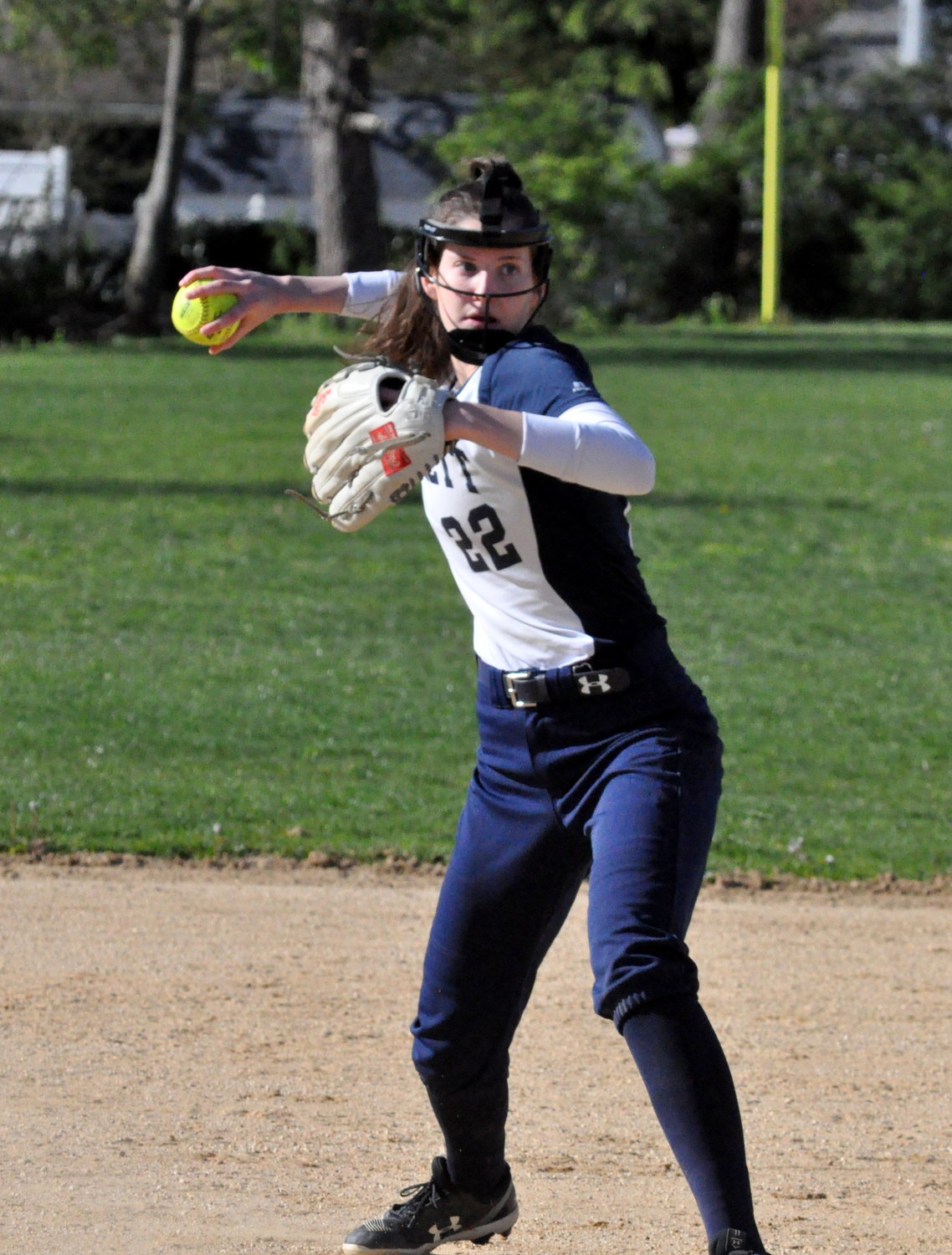 A highlight-reel catch in the top of the first inning by West Hempstead’s Emma Shinsato in center field Monday afternoon kept Hewlett’s Molly Williams at 99 hits for her high school softball career.
Williams, a senior shortstop, reached the 100-hit milestone in her fourth at-bat, however, smacking a sixth-inning double in the Conference VI matchup, and wasn’t done making her 18th birthday a memorable one.
With the Bulldogs trailing by one in the seventh, Williams blasted a leadoff game-tying homer and senior Caitlin Moroney later drove in senior Emma Zalcman on a fielder’s choice for the eventual winning run in a 10-9 victory.
“I knew I hit it hard, but it was into the wind so I had no idea how far it would go,” Williams said. “In the first inning their center fielder made a great catch on the ball I hit. So it was nice to see the second one work out for me and the team. It was a great win.”
After the Rams loaded the bases with two outs in the bottom of the seventh, Hewlett pitcher Maralex Polanco recorded a strikeout to end it. Senior leadoff batter Gianna Nicolo drove in two runs and nine different Bulldogs touched the plate in what coach Haley Birnbaum described as one of their best wins of the season.


“It wasn’t the cleanest game but we battled back all day against the first-place team and I’m definitely proud of the girls,” Birnbaum said. “It was a total team effort.”
Hewlett (8-5) avenged a 10-9 loss to the Rams in the first meeting. It was only the second conference loss of the season for West Hempstead (11-2), which can secure at least a share of the conference title by winning its finale.
“We’ve had an excellent season, but this loss will keep us out of the playoffs because in our conference you also need to win a certain percentage of games,” West Hempstead coach Chris Van Kovics said. “We can’t make excuses. We had a 5-1 lead after three innings.”
The red-hot bat of senior catcher Joey Axel helped the Rams to an early lead. She singled in the first and then tripled and scored in the third. “She must be hitting .700 over the last few weeks,” Van Kovics said. “Nobody can get her out.”
Hewlett scored three times in the fourth on just one hit to close the margin to 5-4. Senior Miranda Petrosini, junior Eve Meyers and junior Paige Underweiser all drew walks and scored.
The Rams responded with a pair of runs to extend their lead to 7-4, but three defensive gems by Williams limited the damage. Hewlett didn’t score in the fifth but plated four runs in the sixth for an 8-7 lead. Moroney, Petrosini and Meyers had RBIs.
Aggressive baserunning by Shindato and junior shortstop Kayla Pendergast led to a pair of runs for the Rams in the home half of the sixth and a 9-8 lead.
But Williams added to an already special birthday with career hit No. 101 and as Birnbaum put it, the Bulldogs “found a way to win.”