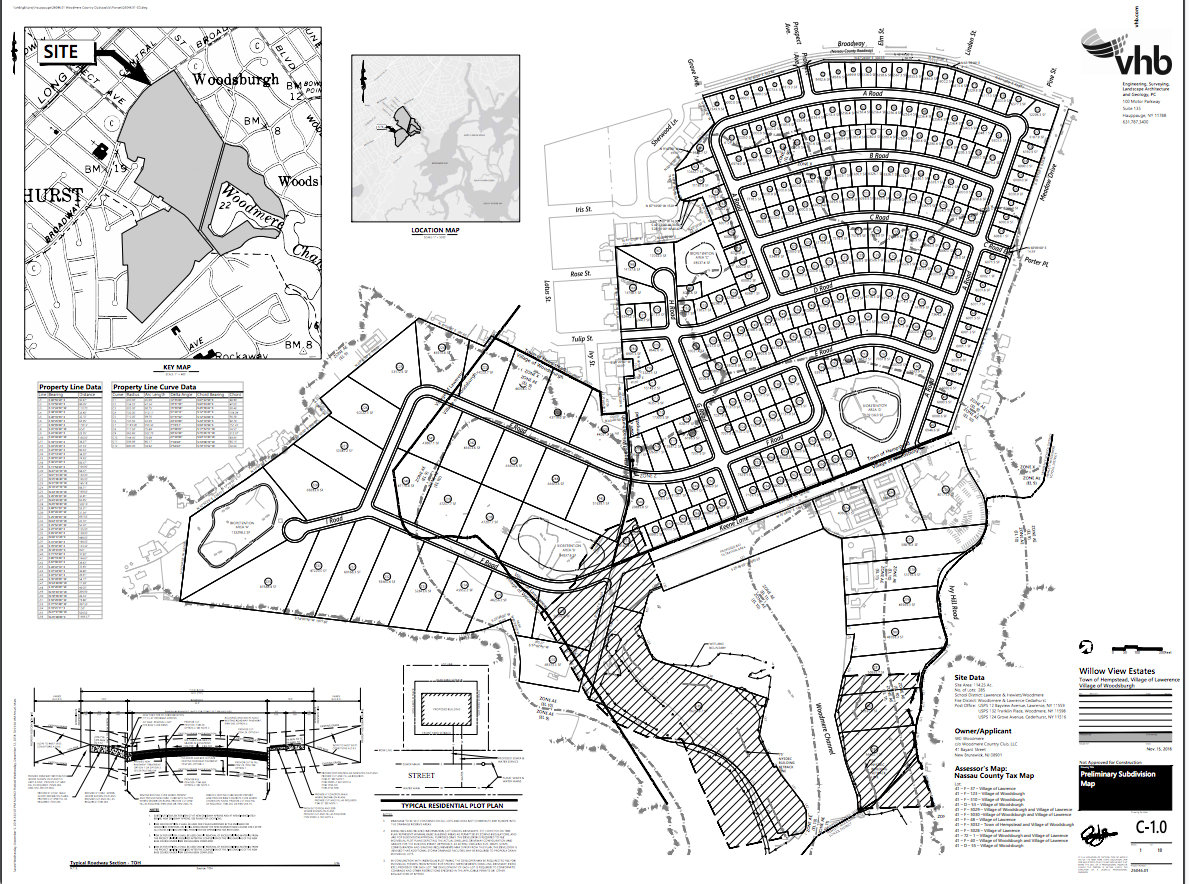 It’s horrendous. It will infringe on the wildlife and absolutely be a blot on the neighborhood.”
Elaine Zucker, Lawrence resident
By Jeff Bessen

Nearly two years after Efrem Gerszberg and Robert Weiss purchased the Woodmere Club, preliminary plans for development of 114.25 acres of the 118-acre property have officially been filed with the Nassau County Department of Public Works Planning Commission.

What is being called Willow View Estates could include 285 single-family houses on the land in Lawrence and Woodsburgh villages and the hamlet of Woodmere. The tentative proposal has 248 homes in Woodmere, 24 in Woodsburgh and 13 in Lawrence. The property also extends to within 300 feet of Cedarhurst village. Approval is required from each municipality.

The minimum lot size is listed as 6,000 square feet, and the maximum is 262,117 square feet. Five additional sites are set aside for storm water basins. New roadways would be extended from Broadway, Meadow Drive and Ivy Hill Road, Keene and Railroad avenues, Rutherford Lane and Tulip Street.

Gerszberg and Weiss purchased the property for roughly $9 million, and anticipate closing the 107-year-old club in 2021. They also agreed to pay nearly $15 million in debt the club has accrued. “We’re probably two years away from breaking ground,” Gerszberg said.

“It’s horrendous,” Elaine Zucker, who has lived on Atlantic Avenue in Lawrence for 33 years, said of the proposal. “It will infringe on the wildlife and absolutely be a blot on the neighborhood.” Zucker’s property abuts the Woodmere Club’s golf course. “We are 100 percent against it,” she added. “This might be a good time to sell.”

On March 7, the planning commission declared itself the lead agency on the development project, to coordinate oversight among all the governments and governmental agencies involved. That list includes not only the municipalities, but also the Federal Emergency Management Agency, National Grid, New York American Water, the state Department of Environmental Conservation and the Army Corps of Engineers.

John McGuire, another Atlantic Avenue resident, has lived between the Woodmere Club and the Rockaway Hunting Club, also in Lawrence — where he is a member — for 45 years. He agreed with Zucker that the development would have negative effects on residents’ quality of life, ranging from the loss of open space to flooding to an increase in traffic. “I’m not going to sell,” McGuire said. “I’ll just put up with all the dirt and noise” of construction.

Even before the Woodmere Club was sold, community members raised concerns about the potential impact on their lives of the development of this large tract of land. Several residents formed the nonprofit 5 Towns Civic Association to make their concerns known to government officials.

“Removing this golf course is a variable that was never ever considered when the adjacent neighborhoods were zoned and developed,” read a Facebook post from Woodmere resident Avi Fertig, who has worked for County Legislator Howard Kopel and the Town of Hempstead. “When the water table is very low, there is more room in the ground to absorb rain. When the [groundwater] pumping was almost entirely phased out about 15 years ago, the water table returned to its natural high level, and flooding started to become an issue.”

After learning that the plans had been submitted, the civic association sent out an email that included information for residents to help battle what they call the “Sixth Town.” The group has hired Howard Avrutine, a lawyer with a firm in Syosset that focuses on land use. Avrutine had not returned a call requesting comment on the Woodmere Club by press time.

“Note that there is nothing in this plan that would benefit the greater Five Towns community,” civic association co-presidents Mario Alex Joseph and Peter Stein wrote in the email. “There is no dedicated public space or park planned.”

The idea of creating a town park or a park district has been discussed by members of the Hempstead Town Board. The town would have to buy the land for either one, and establishing a park district would take a public referendum, after which the residents who voted to approve it would have to pay to maintain it.

Town officials have also floated the idea of creating what they called a Golf Course Coastal Residence Overlay District, to establish more restrictive zoning for construction on environmentally sensitive land. “The proposed zoning has been modified, and the town is still exploring park options, as promised,” said town spokeswoman Susan Trenkle-Pokalsky. “It is anticipated that all details will be shared with the community in May.” A date and location of a public meeting have yet to be determined.

Legal actions have engulfed the project. In November 2016, the town enacted a building moratorium for all privately owned golf courses within its borders. Woodmere Club owners sued and won last year; the town is appealing. Last October, the Village of Woodsburgh banned the subdivision of property in the village. Club owners, once again, initiated a lawsuit.

Gerszberg and Weiss are required to submit a draft of an environmental impact statement to the county planning commission. A public comment period and a hearing will then be scheduled. To view the plans, go to https://bit.ly/2HObgNq.

Have an opinion on the proposed development? Send your letter to the editor to jbessen@liherald.com.