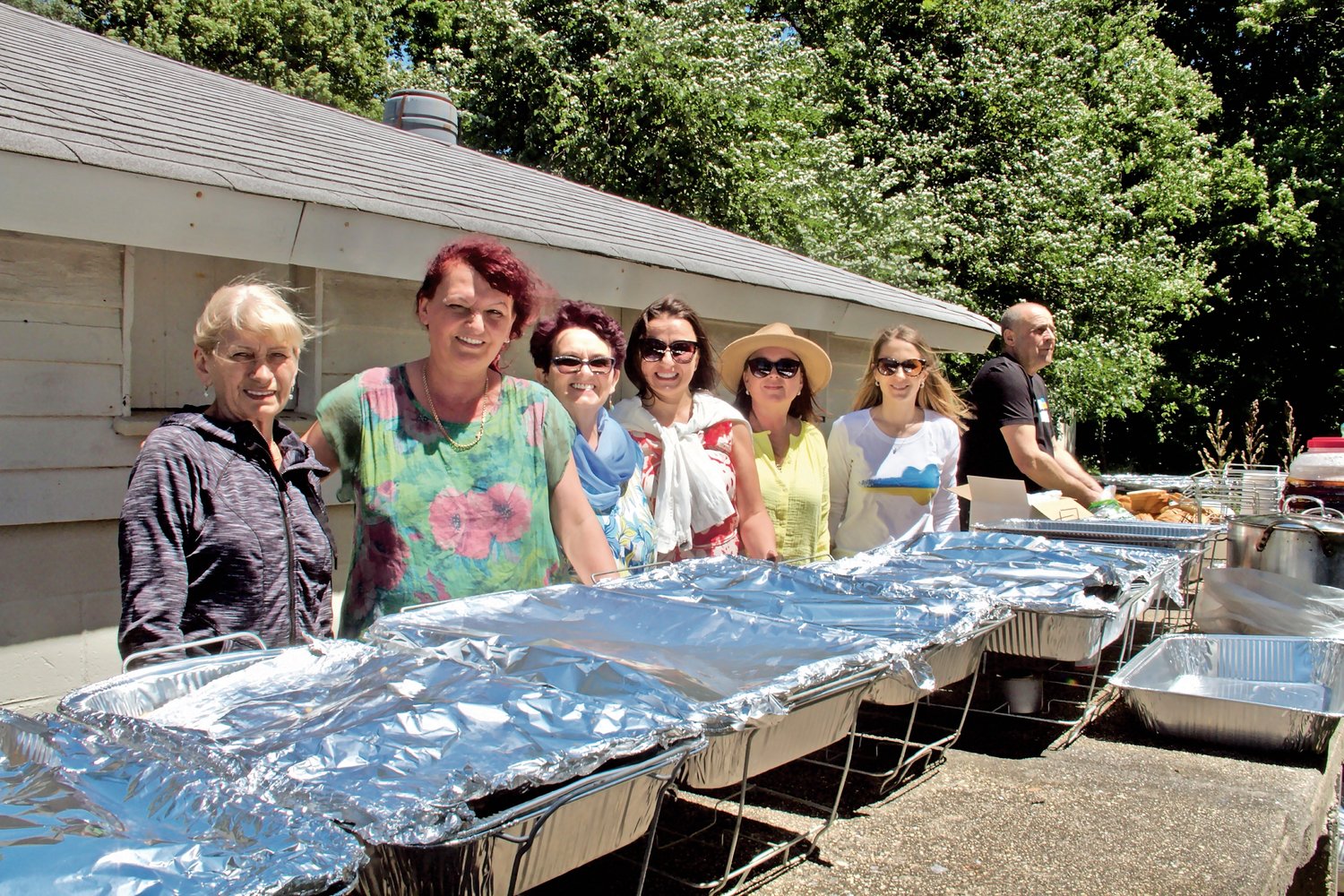 Ten Ukrainian police officers, trained in combat, ran for their lives near Lugansk in May as a Russian drone followed them. A helmet worn by one had already been shot off by the enemy as they dodged a barrage of shrapnel.

Hearing the roar of bombs in the distance, the Ukrainian fighters were desperate to find refuge. When they spotted the door to an underground shed, they ran inside. As Michael, the last to enter, pulled the door closed, a bomb went off outside, causing the door to explode and fall onto him. Michael cannot share his last name for fear he will be killed by the Russians.

“If he hadn’t closed the door they all would have died,” his cousin Halyna Fenchenko said. “He broke his arm and they all lay unconscious for a while.”

Fenchenko, the president of the Long Island chapter for thc Organization for the Defense of Four Freedoms in Ukraine, said the men were taken to the hospital, adding that she doesn’t have any other details as to how or when. All she knows is that her cousin, in a Ternopil rehabilitation center near his home, is still unable to move his arm.

“But he plans to go back to fight,” said Fenchenko, who lives in Islip. “Everybody says someone else will go. But Misha — which is what I call him — said he has to fight for Ukraine.”

Fenchenko came to the United States from Ukraine in 2001 leaving her immediate and extended family behind. They remain in Lviv.

She played a major role in the success of the annual Father’s Day picnic Sunday with the help of volunteers fromcSt. Josephat’s Monastery, in Glen Cove, and St. Vladimir Catholic Church in Hempstead.

The picnic, held for more than 50 years at St. Josephat’s private beach, was a Ukrainian fundraiser this year. Fenchenko, Maria Ircha and Dianna Fiore Radoslovich organized the event and did most  of the cooking. Among the food for sale were 80 dozen perogies and 500 stuffed cabbage. After expenses, Fenchenko said they made roughly $12,000 at the picnic.

“The food was more expensive than usual,” she said, “but people didn’t mind because the money is going for the health of the Ukrainian soldiers.”

Her son Kostyantyn’s girlfriend, Kirsten Gruener, collected all of the raffle items, including two rings estimated at $900 each and tickets to Splish Splash.

Gruener isn’t Ukrainian, but said she wanted to help, and had been working on gathering the raffle items since April, which gleaned $3,400 that day.

She also made several cornhole sets out of pallets, painting them the colors of the Ukrainian flag, which were also sold that day.

Nearby, Kostyantyn was busy making pizza to sell at the picnic. The day before, he had made the dough and sauce. Gruener said that if her boyfriend had his way, he’d open a pizza shop.

Kostyantyn said he worries about his family in Ukraine all the time. Aside from his cousin Michael, he has two uncles fighting in the war.

Although he knew of Russian aggression in other parts of what was once Ukraine, including Crimean, which Russians invaded and annexed in 2014, he wasn’t prepared for the current war.

“At the beginning of the war I was shocked,” he said. “I didn’t know what to do. Should I go there? But I don’t have any training. I don’t think I’d be much help.”

Fenchenko said she has a pulse on what Ukrainians need because they call, write letters and post on Facebook.

“We all have connections there. Our families are there,” she explained. “We talk every day and night, even with the seven-hour difference.”

Ukraine’s hospitals were not ready to care for the types of wounds soldiers and residents sustained from Russian forces, lacking the right equipment to treat them, Fenchenko explained.

Recent donations from the Ukrainian National Home of Hartford of $5,000 and $10,000 from Flushing Hospital Medical Center helped the Defense of Four Freedoms to buy two portable vacuum-assisted wound care units for a hospital in the city of Poltava.

Fenchenko said she will buy whatever is needed with the proceeds from the picnic. People were so generous.

Iwona Siuda, a friend of Halyna Fenchenko, sat at one of the picnic tables.

She didn’t know anyone there except her friend, but she came to show her support, she said. Originally from Poland, she has been living in Glen Cove for 30 years.

“I know how horrible it is (in Ukraine),” she said. “The Polish people know how Germany attacked them and no one helped. So (Poland) is helping Ukraine. After all, we are all Slavic.”