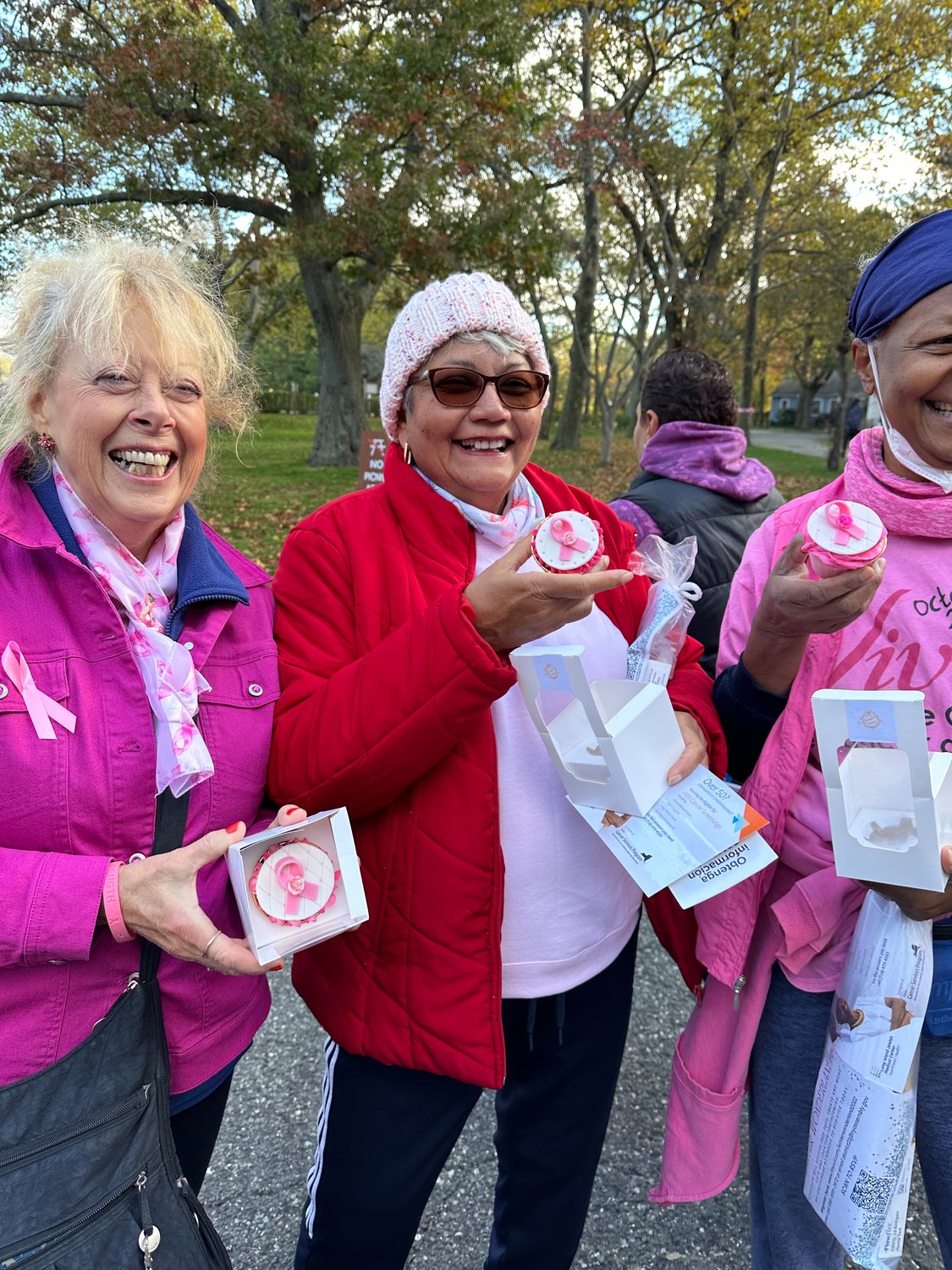 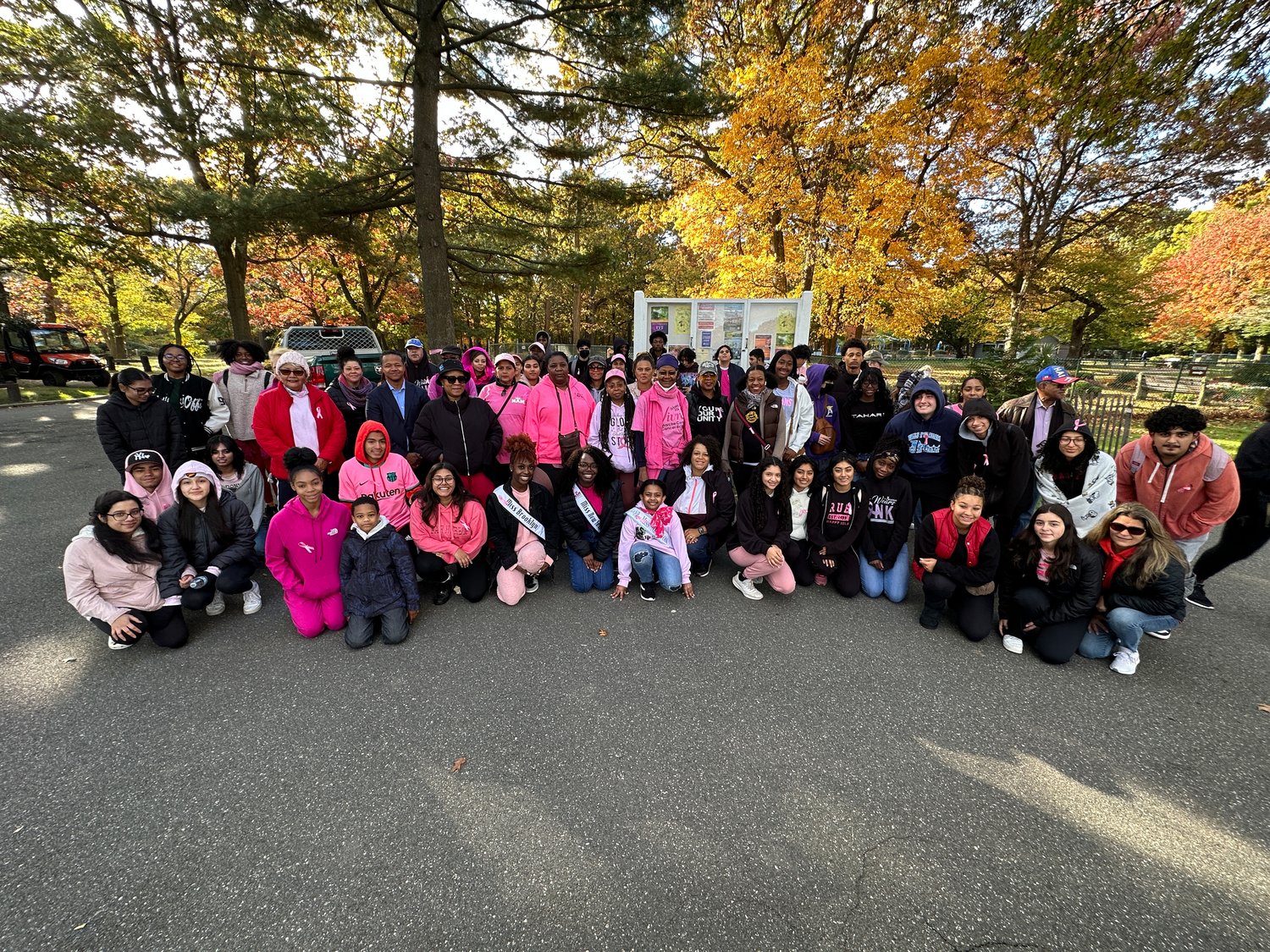 Dozens of participants showed up for the inaugural Dr. Elsy Mecklembourg-Guibert Breast Cancer Walk and dressed in pink for the cause.
Courtesy Office of Assemblywoman Michaelle Solages
Previous Next
By Ana Borruto

Dr. Elsy Mecklembourg-Guibert, a former Elmont school board member who died of a rare degenerative disease last month, was commemorated for her public health efforts and service during a breast cancer awareness walk at Valley Stream State Park on Oct. 29.

Mecklembourg-Guibert, a champion of breast cancer awareness and a community advocate, was Nassau County’s first Haitian-American elected official when she was voted onto the school board. She died on Oct. 3, at age 68 of Creutzfeldt-Jakob disease, which kills one in every million people each year and for which there is no treatment or cure.

One of her most notable acts of service was her dedication to helping the less fortunate in obtaining access to proper health care. Through her non-profit EMG Health Communications, Mecklembourg-Guibert hosted several events annually, including one that focused on early prevention for breast cancer every October.

Her son, Youri Guibert, said early detection and prevention was his mother’s “motto.” She would often encourage women to conduct self-breast exams ahead of annual mammograms, which led many women to discover lumps on their breasts on their own.

“There were women who attended the conferences every year, some of them came back and said (to my mother), ‘You saved my life,’” Guibert said.

For his mother and grandmother’s respective generations, Guibert said breast cancer wasn’t often spoken about. He added that seeing his mother recognized for her openness on the issue and desire to inform others made him feel proud.

“She was a very humble woman, but to know that her work really was the cause of the honor, she would be very proud,” he said, “especially in the Elmont community, which was her base.”

Assemblywoman Michaelle Solages joined officials from Catholic Health, Nassau University Medical Center and the Nassau Cancer Services Program to walk in Mecklembourg-Guibert’s memory and educate the community on ways they can better protect themselves against the disease.

“Dr. Elsy Mecklembourg has a legacy of being a strong advocate of public health in the community,” Solages said. “She was an adamant supporter of disease prevention, early treatment and detection, which is an important component of how diseases like breast cancer are addressed.”

Sara Parise, an oncology nurse and director of the Cancer Services Program of Nassau County at Long Island Jewish Medical Center, said to witness the community coming together to support the cause was inspiring.

Her program offers no-cost cancer screenings for uninsured residents of Nassau County and helps those who don’t have the resources to receive a breast cancer diagnosis at the earliest and most treatable stage, she said.

“Don’t think just because you don’t have insurance that you don’t have a way to get screened for cancer,” Parise said. “We’re going out and working with all the community partners anywhere in the county to be able to raise the awareness of screening and early detection.”

Those who want to get screened can talk to a healthcare provider, pinpoint the specific age of when to schedule a first mammogram and continue to get them annually.

“We don’t want folks to think that just because October is over breast cancer awareness is over,” Parise said. “We want to make sure around the rest of the year folks are making sure to stay up on their breast cancer screenings, to make sure they are aware of signs and symptoms of their own health.”

Although mammograms typically begin at around age 40, depending on one’s risk, breast cancer awareness can begin at any age.

Britt Klein, a physical education teacher at Valley Stream Central High School, organizes and runs a yearly breast cancer walk for students, faculty and parents. She created the walk in 2008 after a couple of students approached her with the idea.

She said the event has been a success ever since, and although the school has had to put a pause on the walk due to COVID, she hopes to bring it back next year.

During October, the school holds a “Go Pink Fun Fair,” where all the extracurricular clubs set up tables geared towards breast cancer awareness and the students are decked out in the color pink. Each one donates a dollar to fundraising efforts, Klein said, adding that students also help dress up the hallways with pink decorations that month.

“I think everyone has been affected by it in some way or another, or know somebody who was affected by it,” Klein said. “There is no better (cause) to be fundraising money for.”