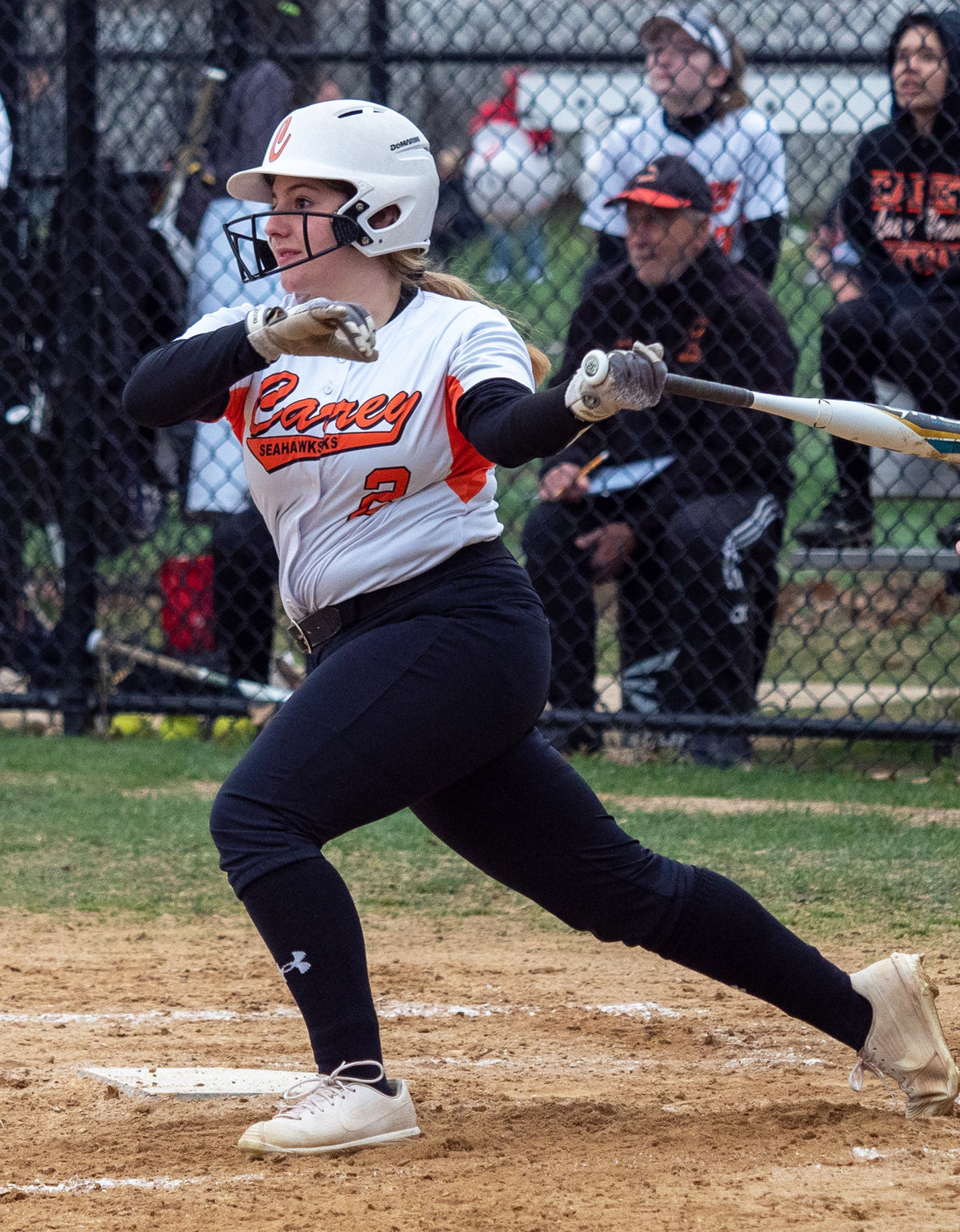 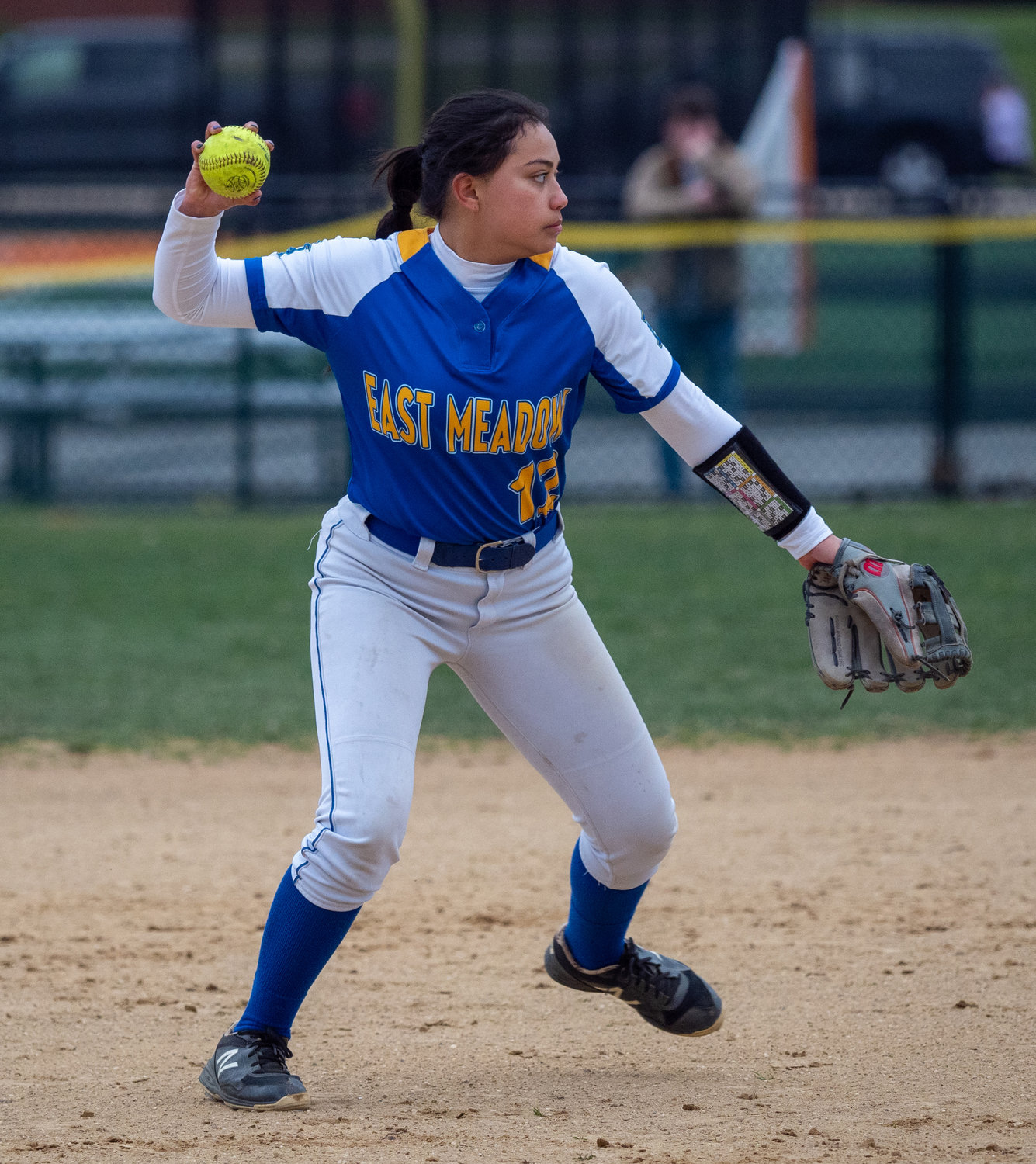 Junior Krystal Quizhpe anchors East Meadow’s defense from shortstop and had three hits in its April 5 loss at Carey.
Eric Dunetz
Previous Next
By Jamie deJong

Carey’s softball team outslugged its way to a home victory April 5 against East Meadow, as the Seahawks won the Conference I matchup, 10-6.

The offensive production was even more impressive considering the game was called early due to spotty lighting in the bottom of the sixth inning. Two hitters in particular, senior third baseman Ava Rigano and junior shortstop Caylee De Meo, sparked the offensive explosion, as each hit two home runs.

“When Caylee and Eva get going everyone gets going,” Carey coach Anthony Turco said. “It’s contagious and it helps because we are such a young team.”

Rigano’s three-run homer in the first opened the floodgates in a sense, as the Seahawks never relinquished the lead following the blast. The duo of Rigano and De Meo drove in a combined six runs, but the rest of the lineup also produced. Sophomore Stefania Imerioli hit a two-run double on a missile to the left-centerfield gap. Sophomores Madison Seidl and Grace Leimgruber also had hits.

Sophomore Lauren Peers was the only pitcher to take the bump for the Seahawks, and she settled in nicely after a three-run first inning. She finished with 6 innings pitched and three strikeouts and the win while helping her own cause with two RBIs.

All in all, it was an impressive output from the Seahawks, but there are still elements Turco said need to be worked on.

“We have to work on our defensive stuff,” Turco said. “We got to work on the little things and a lot of situational stuff you can’t simulate in practice, but all in all I’m very happy with the way that we played.”

Carey improved its overall record to 2-1.

For East Meadow, things seemed to be treading in the right direction following a three-run top of the first, but the Jets could not string together runs thereafter.

“We got off to a hot start and then the bats went cold a little bit,” East Meadow coach Frank Baglivo. “We had some runners in scoring position, but we just couldn’t drive them in and that’s something we will have to improve on moving forward.”

Senior Malia Molina had three hits and an RBI off a sac fly, and her ability to put the ball in play was a major catalyst for East Meadow’s rallies. Senior and leadoff hitter Ciana Santana had two hits and stole third after a first-inning double. Junior Krystal Quizhpe also had three hits.

The key for East Meadow (1-2) will be figuring out how to keep runs off the board, as it was a strenuous task generating outs for most of this game. One bright spot was senior Jenna Scheingold did strike out the side in the fourth inning coming out of the bullpen.

“We got to figure out who our pitcher is going to be, and we have to play better defense,” Baglivo said. “The bats will come but pitching and defense we have to fix.”