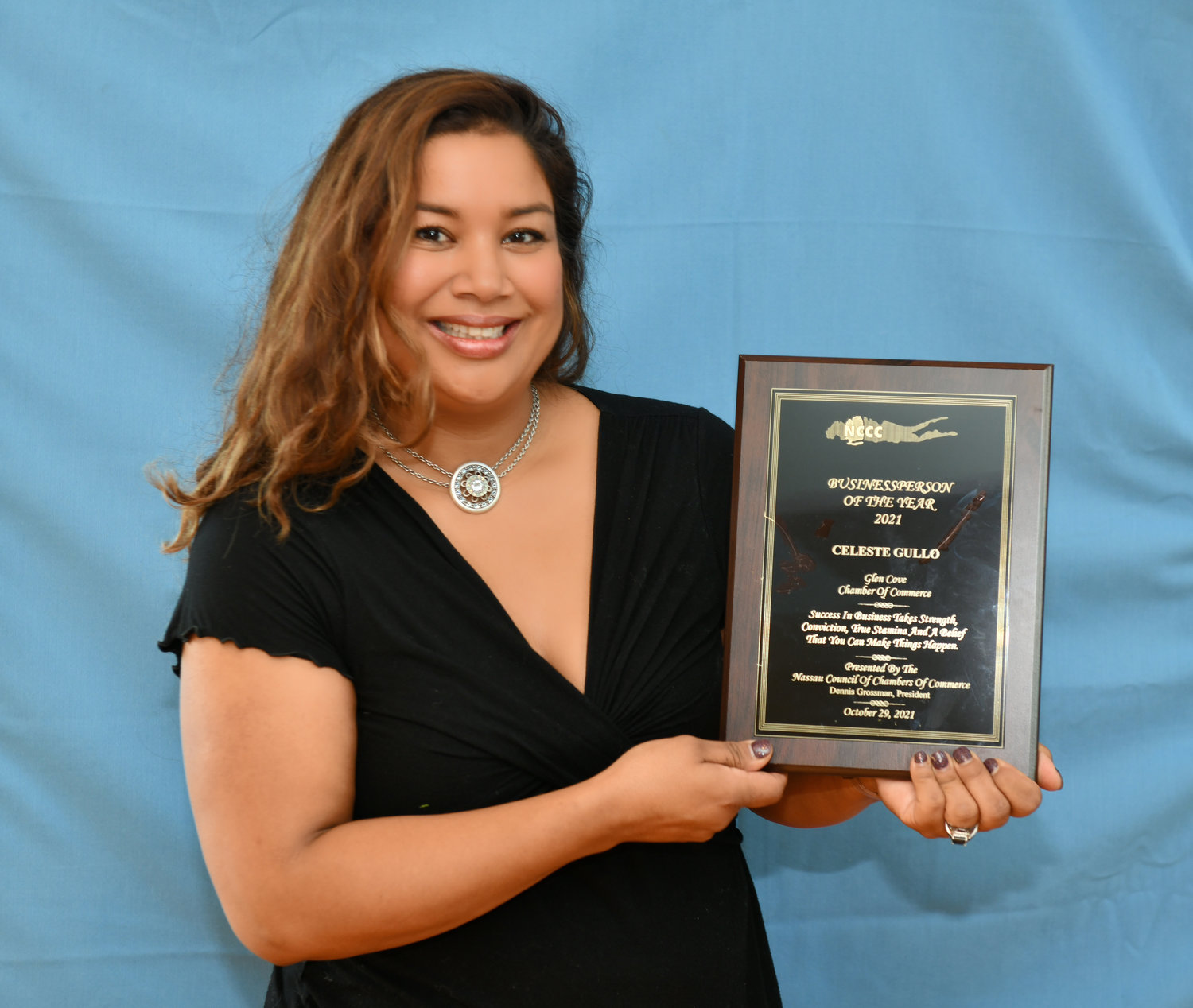 Celeste Gullo, of Glen Cove, owner of an Allstate insurance agency in Glen Head, was named the 2021 Businessperson of the Year by the Glen Cove Chamber of Commerce.
Courtesy Tab Hauser 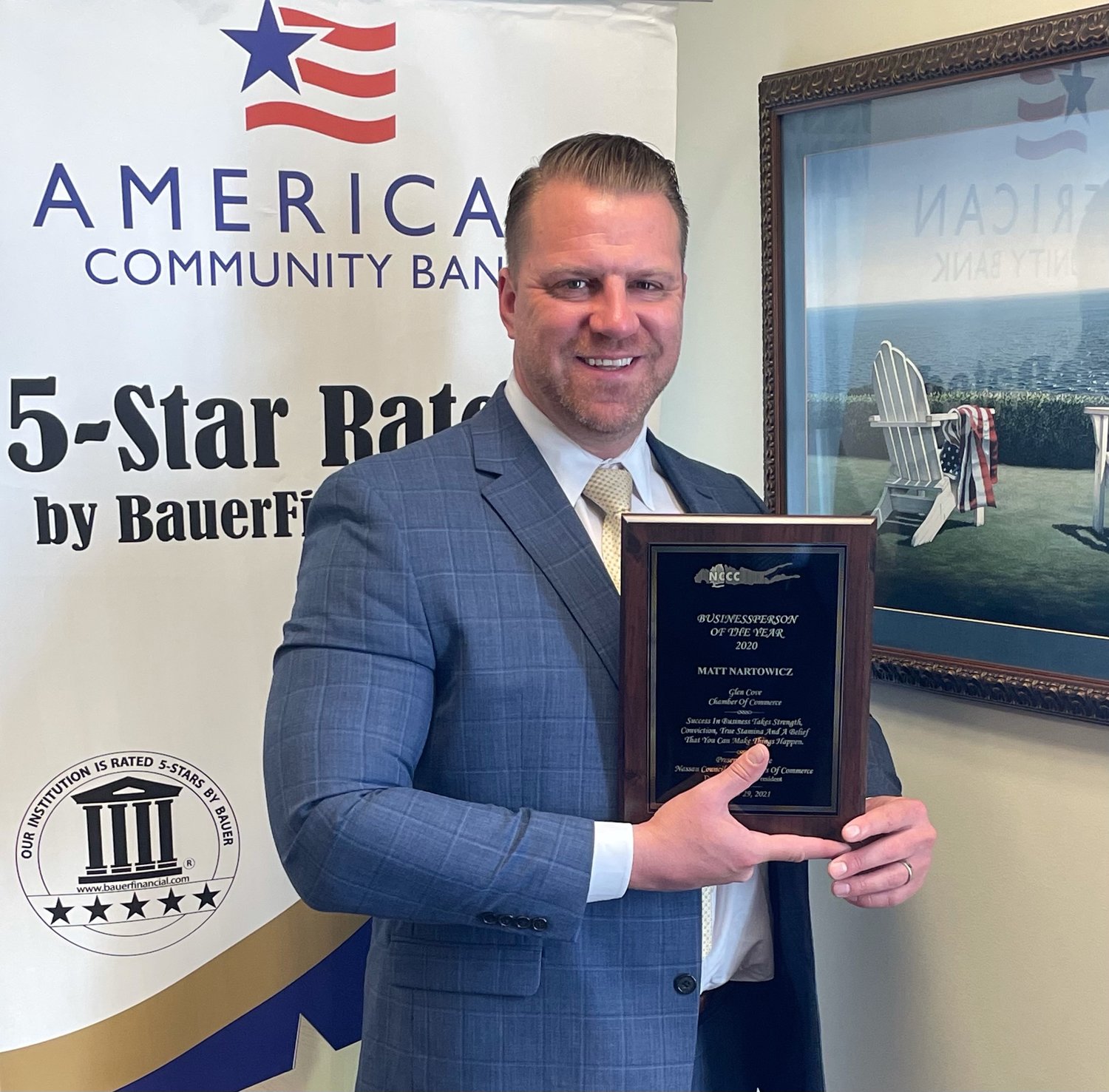 Matt Nartowicz of American Community Bank was named the 2020 Businessperson of the Year by the Glen Cove Chamber of Commerce.
Courtesy Matt Nartowicz
Previous Next
By Jill Nossa

Celeste Gullo works hard, and she seldom stops. The Glen Head-based insurance agent and mother of four continued to grow her business while giving back to the community throughout the coronavirus pandemic — even after giving birth to twins. Her efforts earned her the Glen Cove Chamber of Commerce 2021 Businessperson of the Year award, and she was honored by the Nassau Council of Chambers of Commerce at a breakfast last month.

Gullo, 43, has been in the insurance business since she was 17, when she worked for an Allstate agency part-time while going to college. “I literally started from the very, very bottom,” she said, “scanning and faxing and working my way towards becoming licensed.”

When she graduated from SUNY Old Westbury with a degree in finance, Gullo said, she was still working for Allstate, and making more money than her friends, who were looking for jobs in Manhattan. “I just loved Long Island, and wanted to stay,” she said. “I didn’t want to go to the city.”

And the work itself motivated her. “I love insurance — insurance is really important,” Gullo said. “My favorite thing about being an insurance agent is giving people information. I think that’s the key.”

In 2016, she decided to make a big change. “I started a scratch agency,” she said. “I was sick of working for people, and thought it was the next logical step. Everybody should do that: fire your boss and open your own company.”

Now, at the Celeste P. Gullo Agency, on Glen Head Road, she leads a team of three full-time staff members and two remote workers, and the past year and a half have been a particular challenge. Her twins were born in April 2020, but since her business was considered essential, she kept going.

“We didn’t close a single day,” she said. “I gave birth and was working in the hospital. One thing people don’t understand, which is hard for women in general, when we’re self-employed, we don’t get maternity leave.”

The challenges of a pandemic

Gullo sells life insurance, and at the onset of the pandemic, she said, “everybody was going crazy looking for insurance,” and her staff was also worried about their jobs and their health. It was no time to slow down. “We did what we had to do,” Gullo said. “We’re a good team.”

There have been logistical obstacles to overcome, such as training new agents remotely, and dealing with numerous water damage claims. But the work is just par for the course.

“My biggest challenge is being a mom — being able to be a mom, and do that well, and be there for them,” she said. “But also, I’ve grown my agency tremendously. I wake up every morning wondering how I’m going to get through the day, but I just do.”

Gullo, who lives in Glen Cove, holds food drives several times a year. Since she had a homeless uncle, helping others in need is important to her.

“I love feeding homeless people or people in need,” she said. “Sometimes when I’m totally stressed out, doing something to give back … it’s almost like air, like I can breathe again.”

She is currently holding a food drive to benefit the Porch Pantry, a nonprofit in Glen Cove. She’s collecting food at her office, and will also solicit donations outside Stop & Shop on Sunday.

“Celeste has been very involved in the community, especially through the food drives she holds,” Tom Bunger, treasurer of the Chamber of Commerce, said. “She’s always willing to help, and has been a big help to everyone.”

Patricia Holman, executive director of the Glen Cove Downtown Business Improvement District, agreed that Gullo stands out for her involvement. “As I get to know Celeste, I learn more about her and I think that she’s incredible,” Holman said. “She’s very determined, and is an example of a businesswoman doing it all and doing it all successfully. She’s definitely a role model for all of our girls, and for every woman that wants to start a business.”

Matt Nartowicz was named the chamber’s 2020 Businessperson of the Year. Amid the pandemic, last year’s awards breakfast was canceled, and both years’ awards were presented last month. Nartowicz, 41, of East Islip, has worked for American Community Bank in Glen Cove for 12 years. He started off as a branch manager, then became a regional manager, and now is the chief retail officer, overseeing all of the bank’s branches.

“During the pandemic, myself and the team really stepped up,” Nartowicz said. “It was a tough time, where there wasn’t a lot of communication.”

While other businesses were reducing their hours, he said, the bank extended its. “We made sure we were there for the community,” he said, “helping them out with everything from regular banking needs to working with the Paycheck Protection Program” — the program that helped small businesses get financial aid to help cover their payroll at a time when many businesses were closed or had curtailed their operations.

Nartowicz said that he and his team routinely worked until 9 or 10 p.m. to help businesses, whether or not they were American Community Bank customers. “We just wanted to make sure that if we could do anything that could help them survive, we were going to help them with that.”

When the program launched, he said, there was uncertainty, and a lot of banks restricted it to their customers. “We just opened it up to everybody,” Nartowicz said. “We knew it would make it incredibly busy for ourselves, but we were up for the challenge, and we got the word out.”

He communicated with businesses through the Chamber of Commerce, the Downtown Business Improvement District, the North Shore Hispanic chamber and the Gold Coast Business Association. He also made presentations to other Long Island chambers on Zoom.

The Glen Cove Downtown BID honored Nartowicz at its annual meeting earlier this year. “It was very clear to me that all of our small businesses were being left out,” Holman said, recalling the onset of the pandemic. “They were constantly reaching out to me, and there was nothing I could do to help, except keep searching. Matt got in touch with me and said he could help. These businesses were seconds from going under, and he helped many of them within a couple of hours. I’m grateful for Matt and what he’s done for the businesses.”

“Matt did an excellent job getting loans to businesses who needed them during the pandemic, and he’s still available,” Bunger said. “He’s outstanding. It’s incredible what he did for the businesses.”

It’s no wonder, then, that American Community Bank has gained more customers. “Because we assisted them through that tough,” Nartowicz said, “in return, they’ve moved their accounts to the bank. Since the pandemic, we’ve brought on hundreds of local businesses .”

And after months of speaking to people virtually, he said, the awards breakfast was a nice change of pace. “It was a wonderful honor,” he said. “It was amazing to see all of the chambers come together like that. We were talking business, networking … it feels like we’re almost back to normal.”