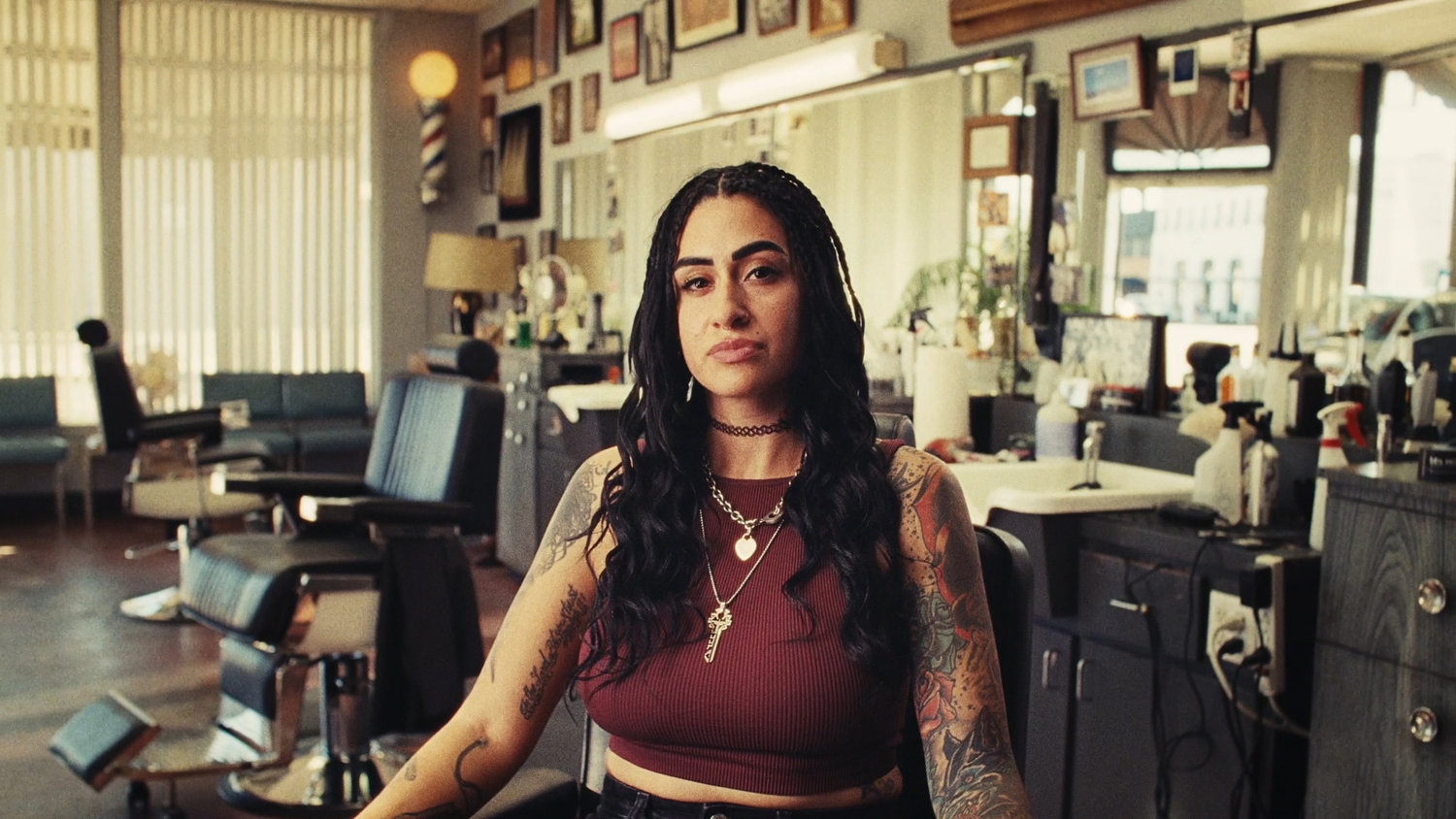 Jamie Rodriguez, of Merrick, acted in her first commercial last October, cutting a man’s hair in the bathroom of a Los Angeles home. The Wantagh barber starred in the Ruffles “Own Your Ridges” campaign, which premiered on Christmas Day.
Courtesy Jamie Lee Rodriguez 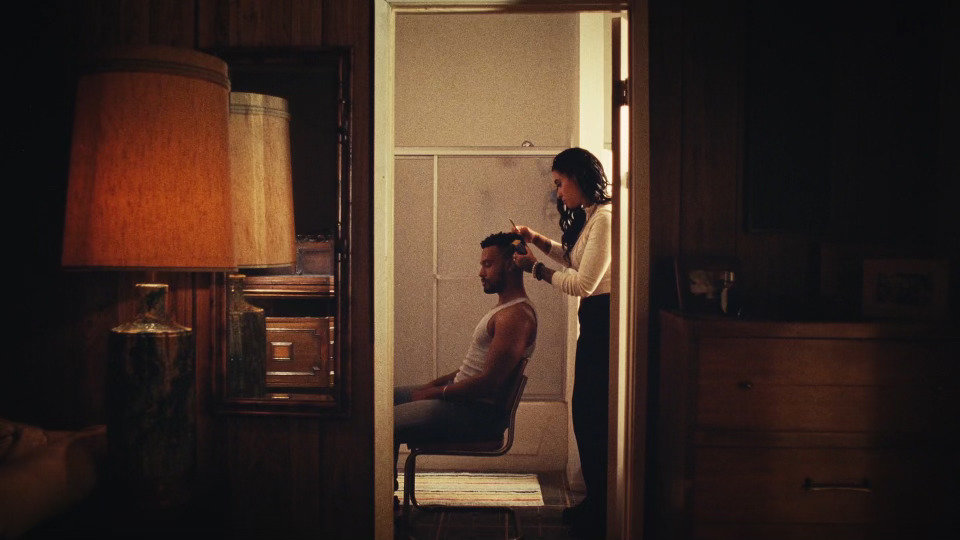 Rodriguez acted in a scene last October in a barbershop in Los Angeles.
Courtesy Jamie Lee Rodriguez
Previous Next
The ‘Owning Your Ridges’ campaign

The commercial, which premiered on Christmas Day, spotlights people

obstacles and achieved success. The first of them was barber Jamie Lee Rodriguez, of Merrick.

The commercial is the first in a series called “Own Your Ridges,” a Ruffles campaign aimed at encouraging viewers to embrace their challenges  — their “ridges” — by showcasing five people who overcame major obstacles in their lives. The spot is set to “DNA,” by Kendrick Lamar.

Rodriguez, 30, who often goes by Jay and works at Hair Magicians, in Wantagh, was discovered by the ad’s casting director, Anissa Williams, on Instagram, where Rodriguez showcases her hair styling skills as @jayleebladez. Williams was searching for a woman barber, and sent Rodriguez a direct message about the opportunity. At first, Rodriguez questioned the authenticity of the message and thought it might be spam, she recalled in an interview with the Herald.

“I was scrolling through my Instagram and noticed a message request from a woman named Anissa saying she was looking for a female barber for a commercial. … Normally, spam messages come in like this,” she said.

But Rodriguez responded anyway, and Williams asked her to record an audition tape and send it to her. Harry Hernandez, Hair Magicians’ owner, helped her record it, shooting her from various angles as she worked. After Rodriguez sent it, Williams set up a virtual meeting with her.

“After I submitted it, I hopped on a Zoom call with the director and they told me I got the part,” Rodriguez said. “Everything just fell into place from there.”

What shocked her the most, she said, was learning that she was the only female barber auditioning for the commercial. She expected to be competing against others for the part. “I was really surprised to find out I was the only one they were looking at for the commercial,” Rodriguez said, “but the director explained that they came across my Instagram page and really liked my work and what I represented.”

After finding out that she got the part, Rodriguez acted in two scenes for the commercial in Los Angeles last October. They were filmed in a barber shop and a house rented for the shoot.

The commercial opens with James watching scenes from his childhood in Akron, Ohio, as he reflects on the “ridges” he faced growing up. He shares the stories of his challenges with four others: a single father, a blind skateboarder, a formerly incarcerated man and Rodriguez, each of whom found success despite hardships they faced along the way.

The single mother of two daughters, ages 9 and 8, said that life hasn’t always been easy, especially working in a male-dominated industry. “When I first started, a lot of men denied me from cutting their hair because they would say, ‘I don’t want a girl touching my hair … they don’t know how to cut,’” she recalled. “It definitely put me down mentally.”

When she began working as a barber, Rodriguez said, she wasn’t making enough money to support her family because she didn’t have enough customers. She recounted worked two or three jobs in one day, and getting home as late as 11 at night. “I was working three jobs, seven days a week, for a very long time just to support my children and continue going after my goals,” she said. “There were times that my kids were sad that I didn’t see them that much.”

She recalled being particularly overwhelmed one day, but receiving comfort and support from Hernandez. “One time I had a mental breakdown because I was so drained,” Rodriguez said, “but I had a great support system with people like Harry. He would tell me, ‘You got this, you’re almost there, you’ve got to keep going.’ Eventually I got to a point where I was like, ‘You know what, I’m not going to let these guys say that women can’t cut hair.”

As she began proving her skills by cutting more men’s hair, she grew popular by word of mouth, and eventually made enough moey to drop two of her three jobs. Now she rents a chair at Hair Magicians for her clients, and runs her own business through her Instagram account, @jayleebladez.

“Jay has a unique ability to move people,” said Hernandez, 39, of Islip Terrace. “She is very influential, in a sense that she can lead people in whatever direction she thinks they should go in.”

Rodriguez was previously a dance instructor and personal trainer, and brings the same type of guidance to her chair in the shop, Hernandez said. “When someone is lost, she can explain to them how to best style their hair,” he said. “She also has her cosmetology license, so she understands facial structure and which hairstyles fit which facial features.”

Another of Rodriguez’s coworkers, Breanna Cracchiolo, of Levittown, said Rodriguez has guided her to where she wants to be. “Jay is very inspiring to me,” Cracchiolo said. “When I first started working at the last hair salon I worked at, I was just an assistant, but Jay and Harry motivated me to become a barber, too. Jay is constantly teaching me new things. I eventually want to rent my own chair like she does.”

Rodriguez said she has finally reached a point in her life where she is content with her balance of family time and work time. “I definitely feel like I’m at a place now where I’m able to be a mother and I’m able to be successful,” she said, “and to hear my kids telling me they’re so proud of me … it made everything worth it at the end of the day.”

Asked what advice she would give others who want to start their own business, she said, “Do what you love to do, and even if the world is against you, don’t give up. It gets worse before it gets better. It’s all about fighting through the bad, because that reward at the end is going to be worth it.”

Rodriguez’s styling services can be booked at jayleebladez.booksy.com or on Instagram.