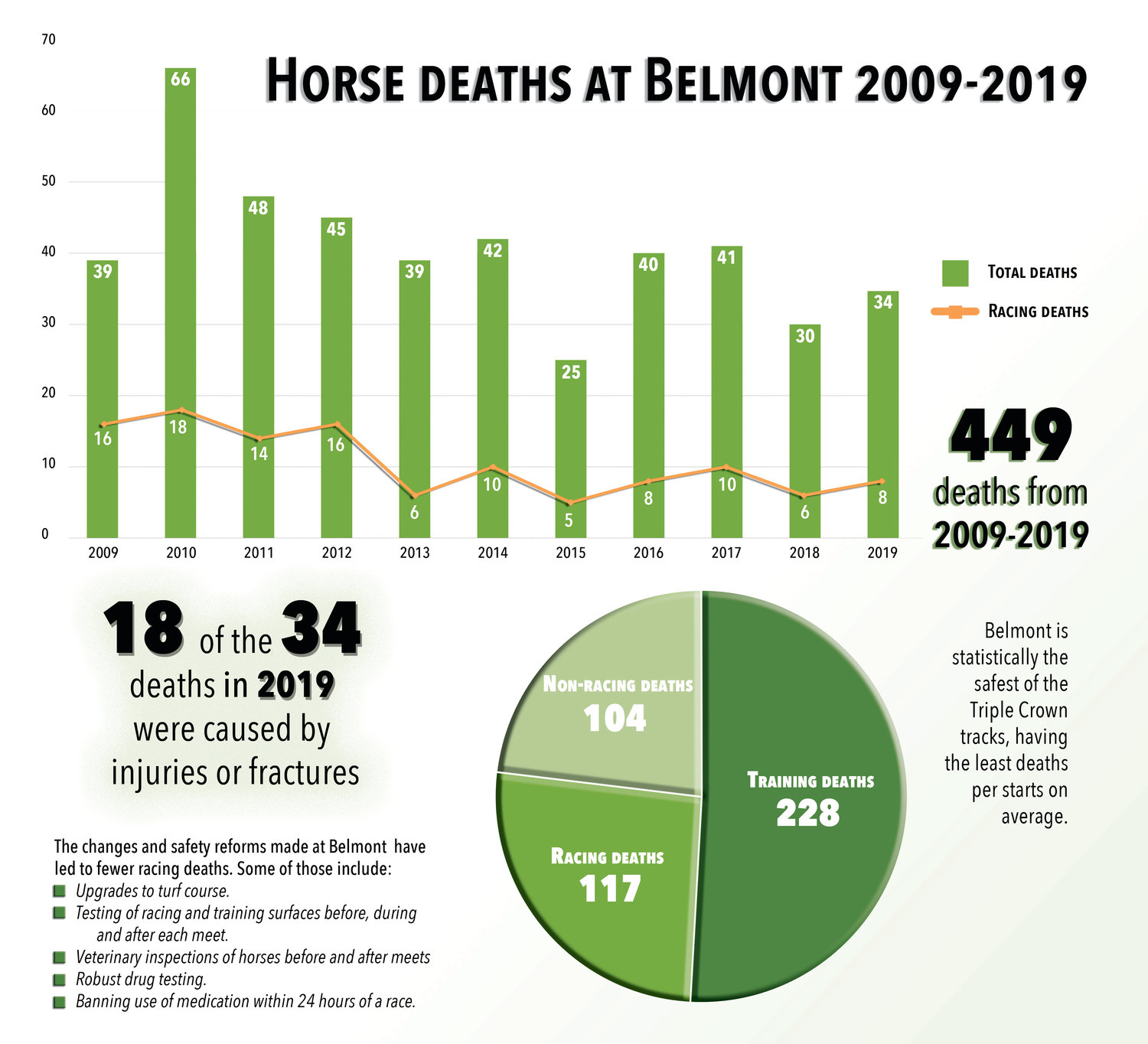 Steward - Someone who is in charge of a horse race.

Steward’s list - The stewards may place the name of any horse on a list for any reason to prevent them from racing.

Veterinarian’s list - The veterinarian’s list is designed as a safeguard to prevent unsound or unhealthy horses from being entered into a race before the horse has recovered from a physical condition or illness.

Furosemide - a diuretic that causes horses to lose 20 to 30 pounds before a race. It is also used to prevent hemorrhaging.

Darken a Day injured her left leg while training at Belmont Park on Nov. 11 and needed to be put down — marking the 34th equine death at the park this year, according to data from the New York State Gaming Commission. It shows that 25 of those 34 horses were euthanized, and nine died of apparent natural causes from Jan. 1 to Nov. 15.

The data separates the deaths into categories based on the type of race or activity the horse was involved in at the time of its death — training, racing or something unrelated to racing. According to the gaming commission’s statistics, eight of the deaths occurred during the racing season and 19 while the horses were training. Seven were listed as non-racing deaths.

Eight of the horses died during the recent fall racing season, which ran from Sept. 6 to Oct. 27. Four died while racing, out of a total of 2,348 starters competing in over 300 races, and another four died during training over the course of 5,694 workouts. As a result, New York Racing Association officials pointed out, 98.7 percent of the races were run safely and without incident, as was 99.9 percent of the training.

“The health and welfare of horses and jockeys competing at NYRA tracks is our highest priority, and one that stands above all other considerations,” said Patrick McKenna, NYRA’s communications director. He added that the organization is working closely with the state equine medical director and the New York State Gaming Commission to review the circumstances surrounding each death at the fall meet, and has already implemented reforms to prevent further equine deaths.

Since 2013 NYRA upgraded its turf courses, and continues to test the racing and training surfaces before, during and after each meet. The Racing Surfaces Testing Laboratory, McKenna said, probes cushion depth, moisture content and surface consistency.

Additionally, he noted, NYRA employs veterinarians to inspect the horses before and after each meet, and have increased the scrutiny put on each horse by creating different standards for workouts and implementing both a steward’s and veterinarian’s list. A horse may be placed on the steward’s list for any reason, and while on it, the horse cannot race. The veterinarian’s list, meanwhile, prevents unhealthy horses from entering races while they are still recovering.

And the New York State Gaming Commission, which is responsible for making and enforcing rules about drugs, seeks to further reduce racing accidents and conducts robust drug testing, according to Communications Director Brad Maione. Its equine drug testing advisory committee was extended for one year under the state’s 2020 budget, which also allows the commission to create an equine drug testing lab through a bidding process.

“While our efforts have yielded positive results, and a rate of injury below the national average in each year since 2013,” McKenna said in a statement, “there is always more work to be done to reduce equine fatalities to zero.”

To further ensure that horses stay healthy at Belmont, NYRA joined with other major racing organizations throughout the country to limit the use of a diuretic on race day. Under its plans, 2-year-old horses will not be allowed to be treated with furosemide within 24 hours of a race, starting on Jan. 1. The prohibition will extend to all stakes races by 2021.

The drug is used as a diuretic that causes horses to lose 20 to 30 pounds before a race, and has also been prescribed to horses to prevent respiratory bleeding while they are running at high speeds. If blood enters the lungs during strenuous physical activity, the horse could hemorrhage.

It is currently allowed — but regulated — in New York, as Mione said the commission has found no link between its use and the horse death rates.

But Marty Irby, executive director of Animal Wellness Action, believes there likely is a link. He pointed to statistics showing that death rates were not as high among race horses in the 1970s — before furosemide was introduced — and explained that the drug causes dehydration, which could lead to brittle bones and fractures, making euthanasia necessary.

Irby also noted that he and NYRA support legislation that would create a federal standard for horse racing. Currently, each state has its own rules about drugs and the use of furosemide, but under the Horseracing Integrity Act, an independent Horseracing Anti-Doping and Medication Control Authority would develop and enforce a federal anti-doping and medication control program.

The bill is currently sitting in committees in both congressional branches, and the State Senate is considering other legislative measures to address the high death rates, which Sen. Joe Addabbo, a Democrat from Queens, who chairs the Senate’s Racing, Gaming & Wagering Committee, said could be introduced next year.

“Our legislation creates a set of nationwide rules that are clear, consistent and conflict-free,” Tonko said in a statement upon its introduction. “This will make horseracing safer for our equine athletes and jockeys while increasing confidence in the sport among trainers, owners, horseplayers and horse racing fans alike.”

McKenna said NYRA supports the bill “because the long-term sustainability of thoroughbred racing depends on enacting real change that prioritizes the health and welfare of horses and riders above all else.”