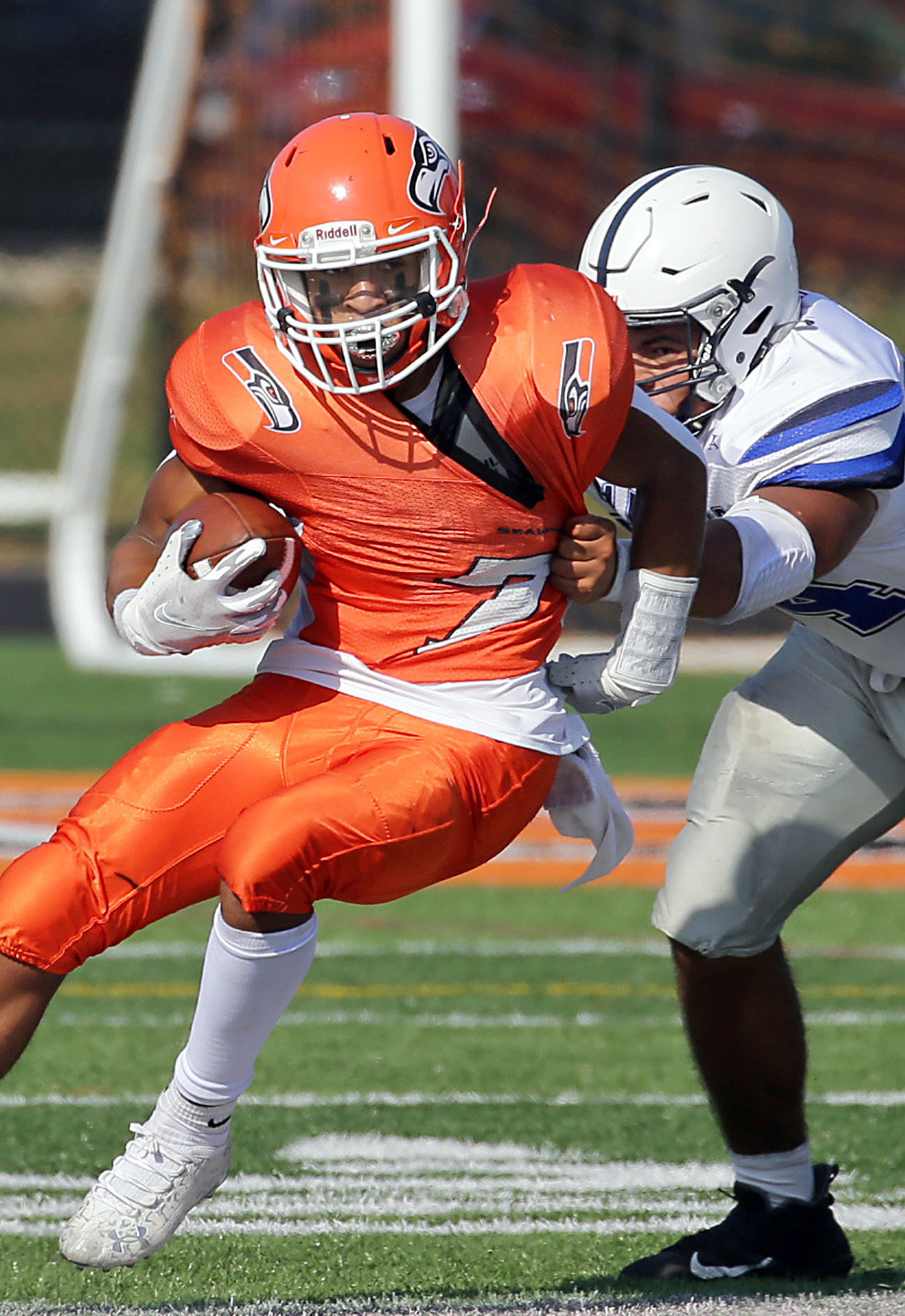 For a third straight week, New Hyde Park’s defense didn’t allow its Nassau Conference II football opponent to change its side of the scoreboard.
Carey was the Gladiators’ latest victim despite the urging of a standing-room-only homecoming crowd last Saturday. The Seahawks had four possessions end on downs in enemy territory in the 21-0 defeat and are winless in three home games.
New Hyde Park (5-1) rushed for over 300 yards, with nearly one-third of those courtesy of long touchdown runs from seniors Dominic Fulgieri (52) and James Asmus (48) in the second and third quarters, respectively. Senior Kyle Lewis led Carey (2-4) with 115 yards from scrimmage.
The Gladiators knocked on the door early and took the opening possession from their own 36 to inside the red zone when Carey’s defense came up with its biggest play of the afternoon. On fourth-and-2, junior James Gangone recovered a fumble to end the threat.
New Hyde Park’s next series, which began at its own 5 following a 55-yard punt from Carey senior Ryan Degnan, ended just shy of midfield when quarterback Vincente Alvarenga was sacked by senior David Ras to force a punt.


However, the visitors would strike for the lone score of the first half and needed only two plays to do so after getting the ball back following another impressive punt by Degnan. Fulgieri caught a 28-yard pass from Alvarenga just shy of midfield and then took a handoff on the next snap and busted along the New Hyde Park sideline for what proved to be the game-winning touchdown. It was 7-0 after Andrew Stein’s extra-point kick.
Two of Carey’s next three possessions saw it drive deep into New Hyde Park territory but come away empty. Late in the second quarter, Lewis racked up more than 30 yards rushing on direct snaps and junior quarterback Matt Metzger added a 14-yard gain as the Seahawks moved into the red zone. But the drive fizzled when Lewis was stopped halfway short on a fourth-and-6 run.
After Asmus put the Gladiators ahead 13-0 with 6:49 remaining in the third quarter, the Seahawks connected on their biggest play of the afternoon, a 36-yard completion from Metzger to Lewis. They were threatening to score before a 15-yard penalty hurt momentum and eventually led to a third-and-20 interception by Fulgieri off a tipped ball.
Fulgieri iced it with a 7-yard touchdown run with 6:50 to go. He had 107 yards. Asmus added 75. Nicholas DePompeis’ 140 yards led New Hyde Park, which hadn’t beaten Carey since 1999.
The Seahawks, who got three touchdowns from sophomore tailback Will Tolliver in wins over Calhoun and Elmont, sit sixth in the Conference II standings with 116.0 power rating points.
Carey visits head coach Mike Stanley’s alma mater, Baldwin, this Saturday before closing the regular season at home against Valley Stream Central on Oct. 30. The Seahawks have never faced Baldwin; they last faced VSC in the 2019 playoffs and lost the first-round matchup on the road.