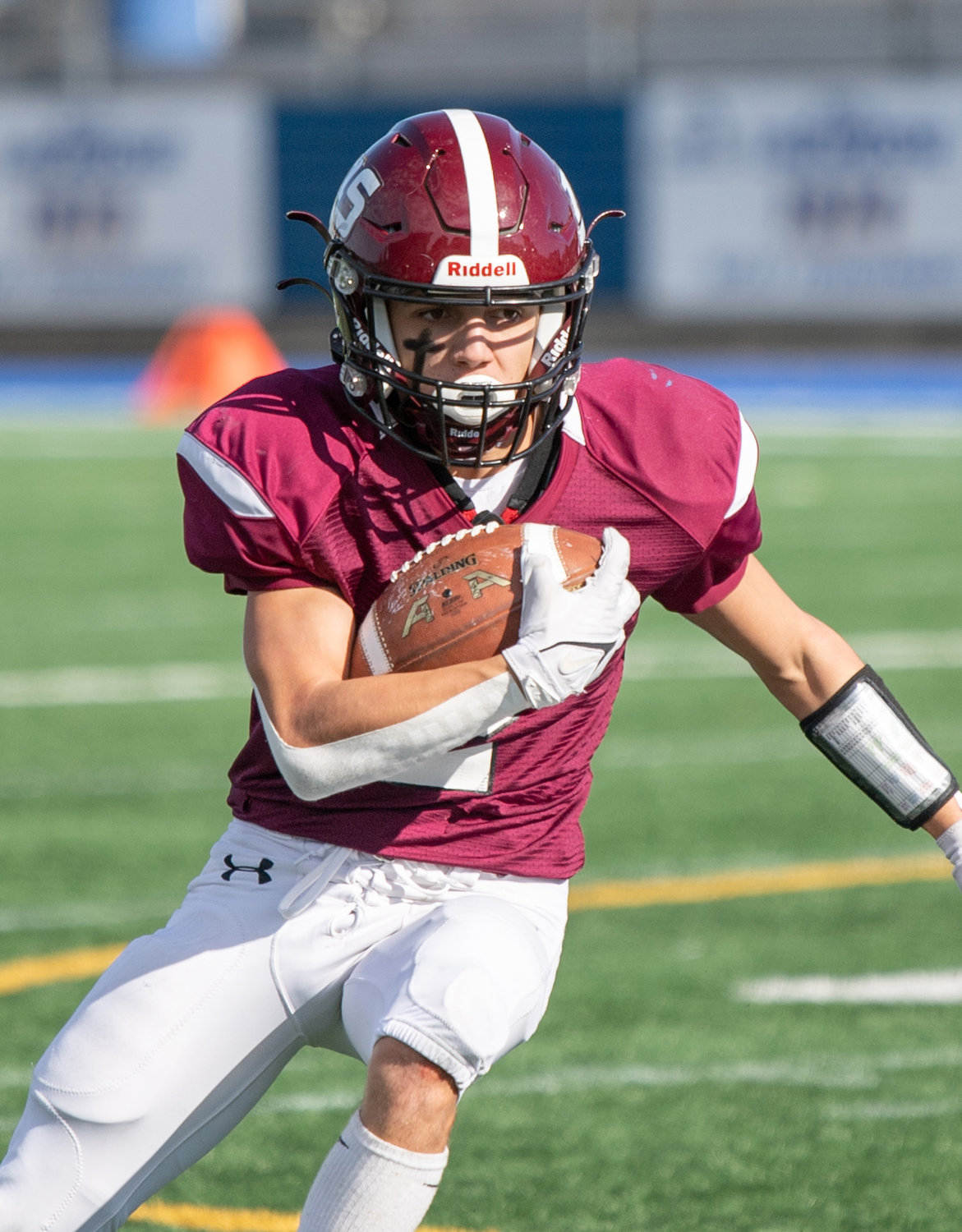 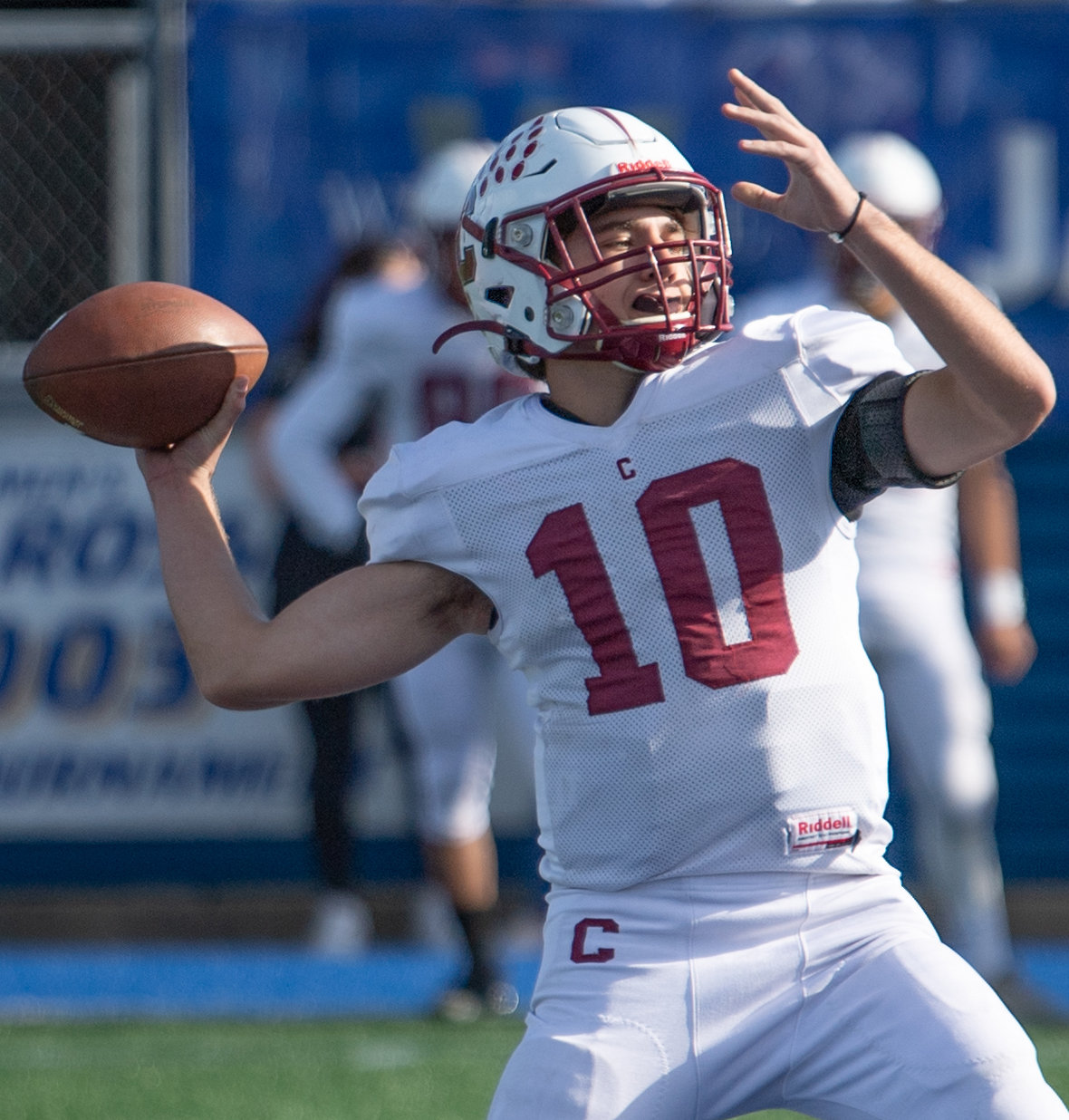 Clarke senior quarterback Nicholas Giardino's passing and rushing touchdowns weren't enough to get the Rams past North Shore in the semifinals.
Media Origin Inc./Herald
Previous Next
By Tony Bellissimo

Falling behind for the second time in as many playoff games didn’t stop North Shore in its quest to return to the Nassau Conference IV football championship stage.

The second-seeded Vikings spotted No. 3 Clarke an early score in Saturday’s semifinal at Hofstra’s Shuart Stadium before ripping off six straight touchdowns on the way to a convincing 42-16 victory. Junior quarterback Peter Liotta threw for one touchdown and ran for a score, junior Nick Livoti had rushing and receiving scores and recovered a fumble on special teams, and senior Daniel Quigley added a pair of rushing touchdowns to lead an offense that racked up 379 yards.

North Shore, which dropped last season’s conference final at home to Wantagh, last captured a county title in 1975. The Vikings (8-2) face No. 4 Cold Spring Harbor (7-3) in the championship game next Saturday at Hofstra at 12:30 p.m.

“Malverne jumped on us early in last week’s playoff opener and Clarke scored on the first possession against us today, but our guys stood tall and everyone did their jobs,” North Shore head coach Dan Agovino said. “We’ve talked a lot about how last season ended and the kids want to work as hard as they can and do whatever they can to win next week.”

Clarke (7-3), which knocked off East Rockaway in the first round of the playoffs, 20-12, got passing and rushing touchdowns from senior quarterback Nick Giardino. He connected with senior Sean Welsh on a 38-yard scoring strike and two-point conversion toss and the Rams led North Shore 8-0 after the first quarter.

The Vikings took control with 29 second-quarter points, thanks in large part to three takeaways. All three Clarke turnovers led to Vikings’ touchdowns — the first of which was an 11-yard run by Liotta following a forced fumble by junior Nick LaRosa and recovery by senior William Feldmann. An interception by Feldmann late in the half led to Liotta’s 4-yard touchdown pass to Livoti.

“Anytime you’re plus-3 in the turnover department it’s big,” Agovino said. “This is definitely a proud moment.”

In between Liotta’s touchdown run and pass, Livoti pounced on a Clarke fumbled kickoff return and two snaps later went 49 yards for a rushing score.

“We’re hungry,” said Livoti, who behind a line comprised of Reece Ramos, Danny Sotifyadis, Anthony Santoro, Nicholas Caprarella and Andrew Fabiilli accounted for 95 of the team’s 294 yards on the ground. “We remember how Wantagh celebrated on our logo last season and we’ve used that as motivation,” he added.

Cold Spring Harbor defeated North Shore, 14-13, back on Sept. 18. “We just have to worry about ourselves,” Agovino said. “We’ll break down the film from when we played and throw in a few wrinkles. It should be a good one.”