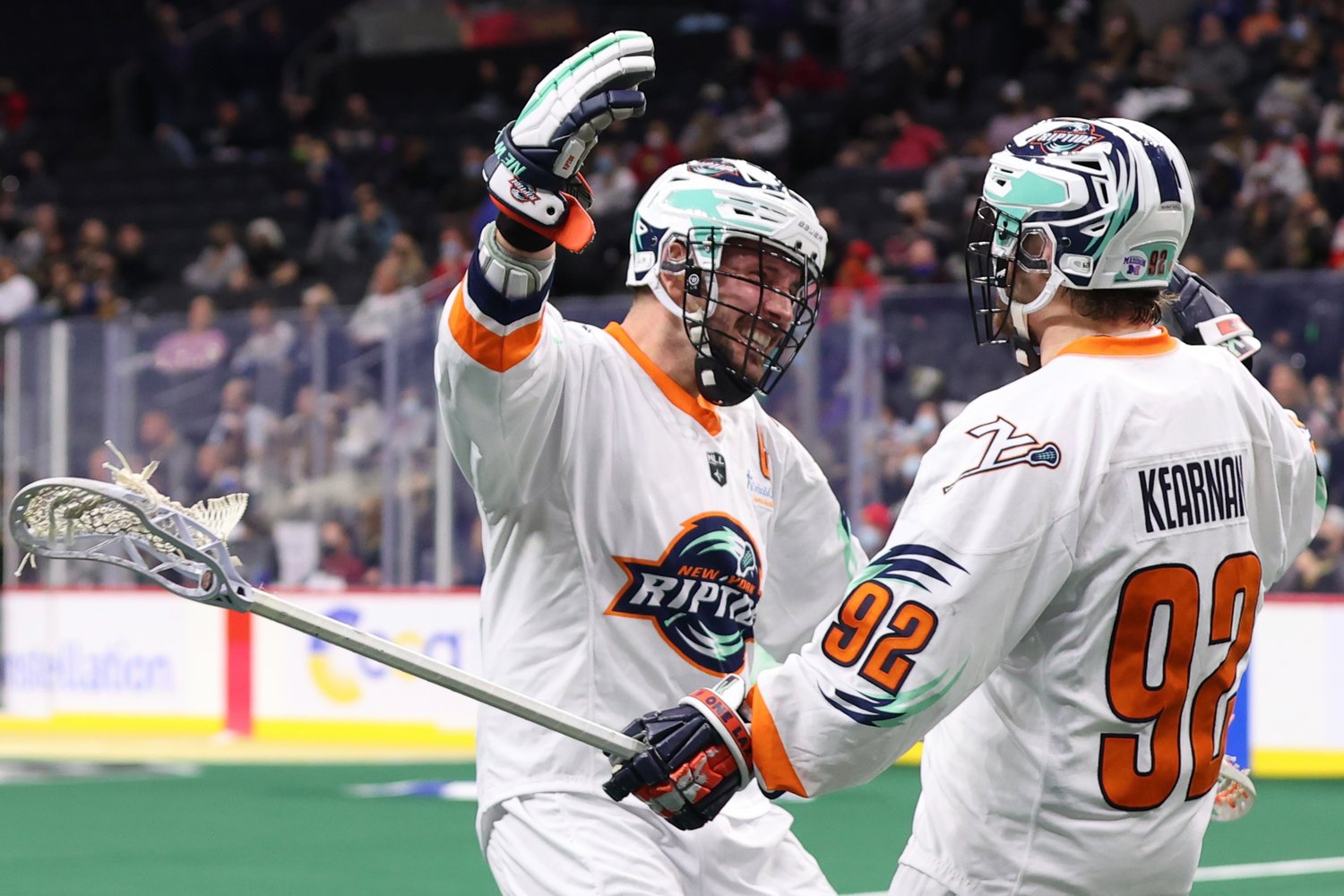 Connor Kearnan, right, celebrated with Dan MacRae after one of Kearnan's four goals in the Riptide's 13-12 win at Philadelphia on Sunday afternoon.
Courtesy NLL/Heather Barry
By Tony Bellissimo

After four difficult losses by a combined eight goals, the New York Riptide earned its first victory of the 2021-22 NLL campaign on Sunday afternoon thanks in large part to the goaltending of rookie Steven Orleman and a power play that cashed in all but one of its five man-up opportunities.

Orleman made 56 saves, Connor Kearnan had four goals, and rookie Jeff Teat dished out six assists and scored once to lead the Riptide to a 13-12 victory over the Philadelphia Wings at Wells Fargo Center.

“It feels great to get the monkey off our backs,” Riptide head coach Dan Ladouceur said. “Orley played really well in goal and we were able to grind them down in the second half.”

Kieran McArdle added five assists and Tyson Gibson two goals and two assists in the victory. Corey Small and Cory Vitarelli both had a hat trick for Philadelphia.

No strangers from playing from behind this season, the Riptide trailed by multiple goals in the first half for the fifth time in as many games. The Wings led 8-6 with 5:20 remaining in the first half after netting four straight goals. Teat and Kearnan answered late in the second quarter and it was tied at 8 at halftime.

“We had good energy going into halftime,” Ladouceur said. “They played the night before and even though I feel there’s a bit of an advantage there with timing, we felt if we doubled down on how hard we were working we could gain an edge in the second half.”

The Riptide began the second half on the man advantage and didn't take long to capitalize, as Larson Sundown scored 42 seconds in. Sundown would follow it up later in the quarter with another, and Callum Crawford netted his 399th career goal on the power play off a feed from Teat to make it 11-9 heading into the fourth.

New York led throughout the final frame, and held Philadelphia, which went 5-for-7 on the power play, to one goal over the final 5:40. Ladouceur lauded the defensive work of Damon Edwards, Dan MacRae, Darryl Robertson and Leo Stouros in front of the emerging Orleman.

The Riptide return home to take on the Buffalo Bandits this Saturday at 7:30 p.m. at Nassau Coliseum. It’s Superhero Night and the Riptide unveiled a special edition “Healthcare Heroes Jersey” to honor healthcare workers. Buffalo (4-0) is one of two remaining unbeaten teams.

“They’re on fire,” Ladouceur said of the Bandits. “They have a big, physical defense and an MVP-caliber goaltender in Matt Vinc. Offensively, we need to be at the top of our game.”

Fans can take advantage of the “Holiday Pack” and get a pair of seats and a team hoodie for $72. Until further notice, all guests ages 2 and up must wear a mask while inside the arena except when eating or drinking.