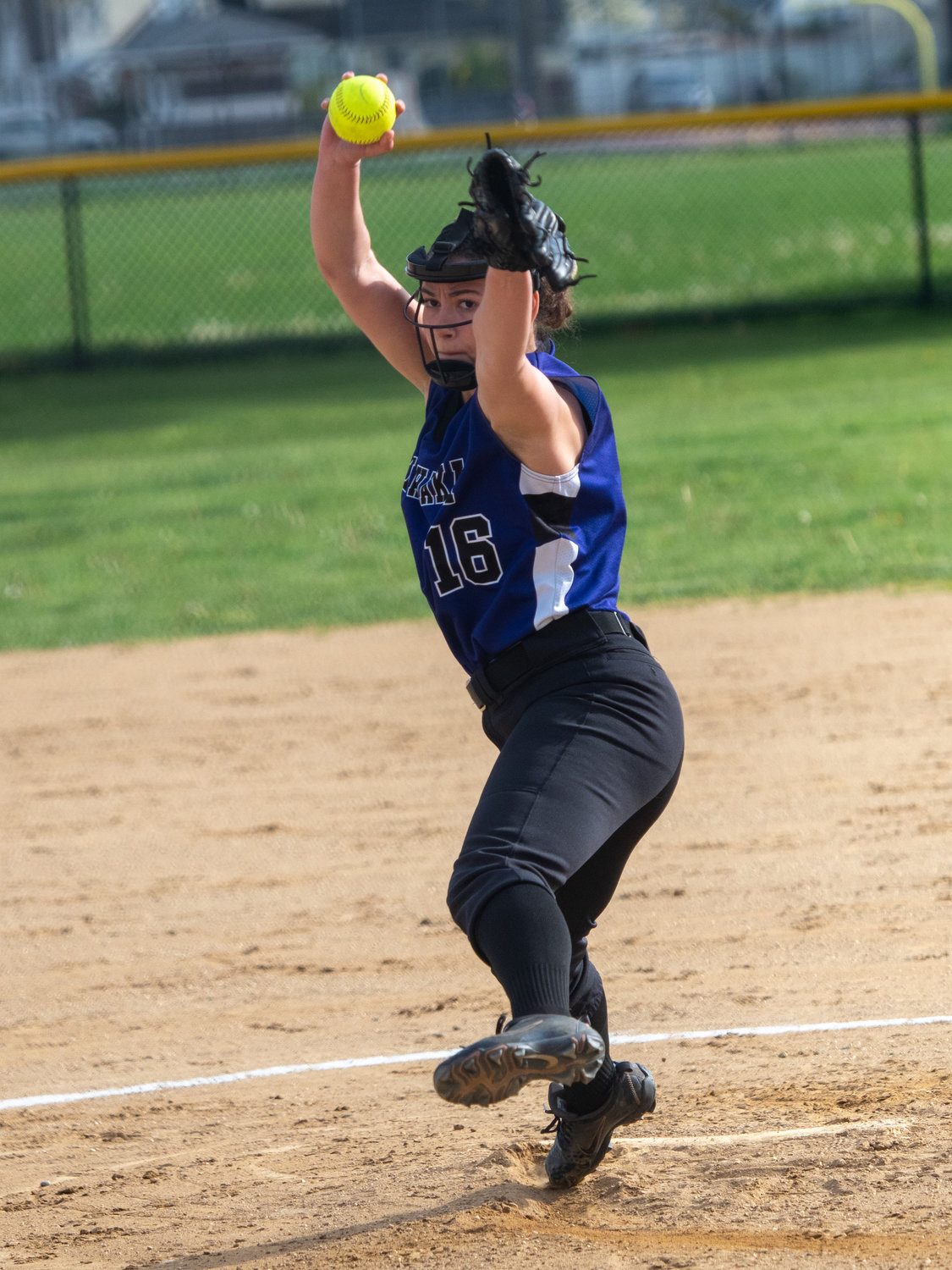 Sophomore pitcher Madison DeMaio has been dominant this spring and tossed a no-hitter May 5 in a 4-0 win over Locust Valley.
Eric Dunetz/Herald
By Tony Bellissimo

Snapping a 30-game losing streak dating back to 2018 was just the start of something special for Sewanhaka’s softball program this spring.
Behind pitcher Madison DeMaio, who struck out 10 in a season-opening victory over Floral Park on March 28, shortstop Lydia Braun and catcher Devin Schneidmuller, the upstart Indians captured 11 of their first 13 games and need one win in their final two or an Oyster Bay loss to claim the Conference V title.
“That win over Floral Park was the first varsity win for every girl on our roster,” Sewanhaka coach Deirdre Kelly said. “It was great, especially for the seniors. I’m so happy they’re going out with a big year. We haven’t made the playoffs for a really long time so hopefully that’s something they’ll also experience.”
In Conference V, only the champion has a chance to qualify for the playoffs and must win at least 70 percent of its games. As long as the Indians can manage a split of their last two, they’ll be playing into next week.
“These girls take a lot of pride in getting better and winning,” Kelly said. “Our defense has really improved compared to recent years and about midway through the season we started hitting 1 through 9.”


The way DeMaio, a sophomore, has been dominating in the circle, not much run support is needed. She has 161 strikeouts and single digit walks, Kelly said. She also hits cleanup and leads Sewanhaka in batting average. “I noticed her skill level right away in practice,” Kelly said of DeMaio, a transfer from Long Island Lutheran who no-hit Locust Valley in a 4-0 victory on May 5. “She wants the ball every game and has one of the best temperaments of anyone I’ve coached.”
Schneidmuller, a junior, did some pitching last spring but has shifted mainly to backstop and developed instant chemistry with DeMaio, Kelly said. “Devin is spectacular behind the plate,” the coach said. “She calls all the pitches and is one of our leaders.” Schneidmuller hits third in the order and has power to all fields. She drove in two runs in the win over Locust Valley.
Senior Kaitlyn Albrektsen also pitched last season and now she’s leading the outfield in center. Junior Nicole Plascencia plays left, and juniors Mia Romero and Daniela Melara both contribute in right.
The infield is anchored by Braun, a senior who also serves as the offensive catalyst from the leadoff spot. She tripled twice and scored both times against Locust Valley. “Lydia is our lightning rod,” Kelly said. “She’s our best defensive player and if she gets on base, we’ll score.” Senior Jazmin Solorio-Pulido starts at first, sophomore Brooke Scicutella at third, and sophomore Gabriella Plascencia at second.
“It’s been great to see how well the girls responded to both losses,” Kelly said. “They work hard in practice and are quick to compliment each other when someone makes a nice play. It’s really a cohesive group.”