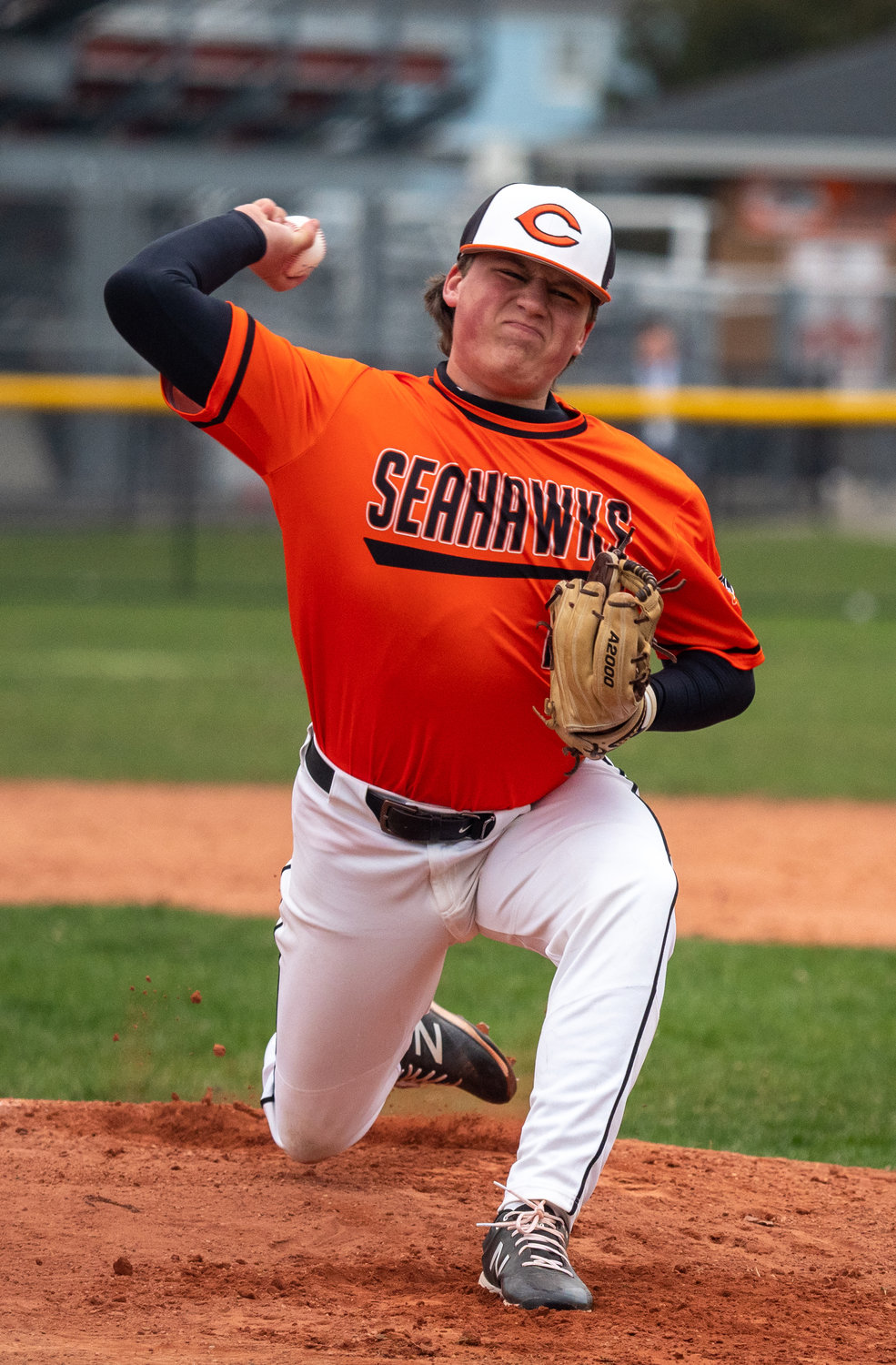 Jake Berenger picked up his first varsity win on the mound March 30 and followed up with an 11-strikeout performance to beat Hewlett six days later.
Eric Dunetz/Herald
By Brian Kacharaba

After a heartbreaking defeat in last year’s playoffs, the Carey baseball team appears to be even more determined to make another championship run this spring.
Last June, the Seahawks were a strike away from eliminating eventual county champion South Side before allowing a three-run homer in the top of the seventh for a crushing 8-7 defeat. But backed by a stacked lineup and a reliable pitching staff, the Seahawks are off to a 7-0-1 start this season and sit just one-half game behind undefeated Calhoun (8-0) in the Conference A2 standings at press time.
“We graduated a few really good players, and we had a few players returning and we’ve had a lot of young kids really step into their own and do a great job,” Carey coach Doug Robins said.
The seven wins are just three less than its entire 2021 total and the latest one on April 12 didn’t come easy. Carey took a 7-0 lead over Roslyn, only to have the Bulldogs rally to tie it. Junior reliever Jake Perlowitz stopped the bleeding with 3 1/3 innings of scoreless relief and the Seahawks offense took over again and scored the final 10 runs to win by a football-esque score of 17-7.
There is hardly a breather in the Carey lineup as eight Seahawks who have appeared in at least six games are batting at least .300. Senior outfielder Teagan Graham, who earned All-Conference honors last season, is batting .500 (14-for-28) with a home run and a team-leading 14 RBI to go with 10 stolen bases.


“He’s put a real hurtin’ on the ball,” Robins said.
One of the bigger surprises is eighth-grade leadoff hitter Jayden Gigante, who is hitting at a .458 clip with eight RBIs, including a 3-for-3, two stolen base effort in a 7-1 win over Hewlett on April 5.
“He plays like he’s a senior,” Robins said. “He puts the bat on the ball. He’s very aggressive. He’s attacking the pitch. He’s gotten some big hits for us. For an eighth grader, you wouldn’t know it.”
Also off to good starts are first baseman Dom Romano (6-for-12, .833 slugging), second baseman Justin Babiak (.391), and catcher Joe Moryl (.375). Senior Patrick Murnane won the right field job and can be depended on for a key sacrifice bunt.
Carey also boasts a three-man rotation of senior Ryan Degnan, junior Jake Berenger and senior Douglas Prescott. The 6-foot-3 Degnan is already 3-0 with a 0.41 ERA and 26 strikeouts in just 17 innings and is also hitting .444 with a home run and eight RBI.
“He’s really our No. 1,” Robins said. “He’s done a great job over the years. He was our No. 1 last year as a junior. He’s not walking guys, he’s challenging guys.”
Berenger picked up his first varsity win against Kennedy on March 30 and followed that up with an 11-strikeout performance against Hewlett to improve to 2-0, and Perlowitz has two wins over three relief appearances. At the plate, Perlowitz is batting .304 with a homer and Berenger is at .300.