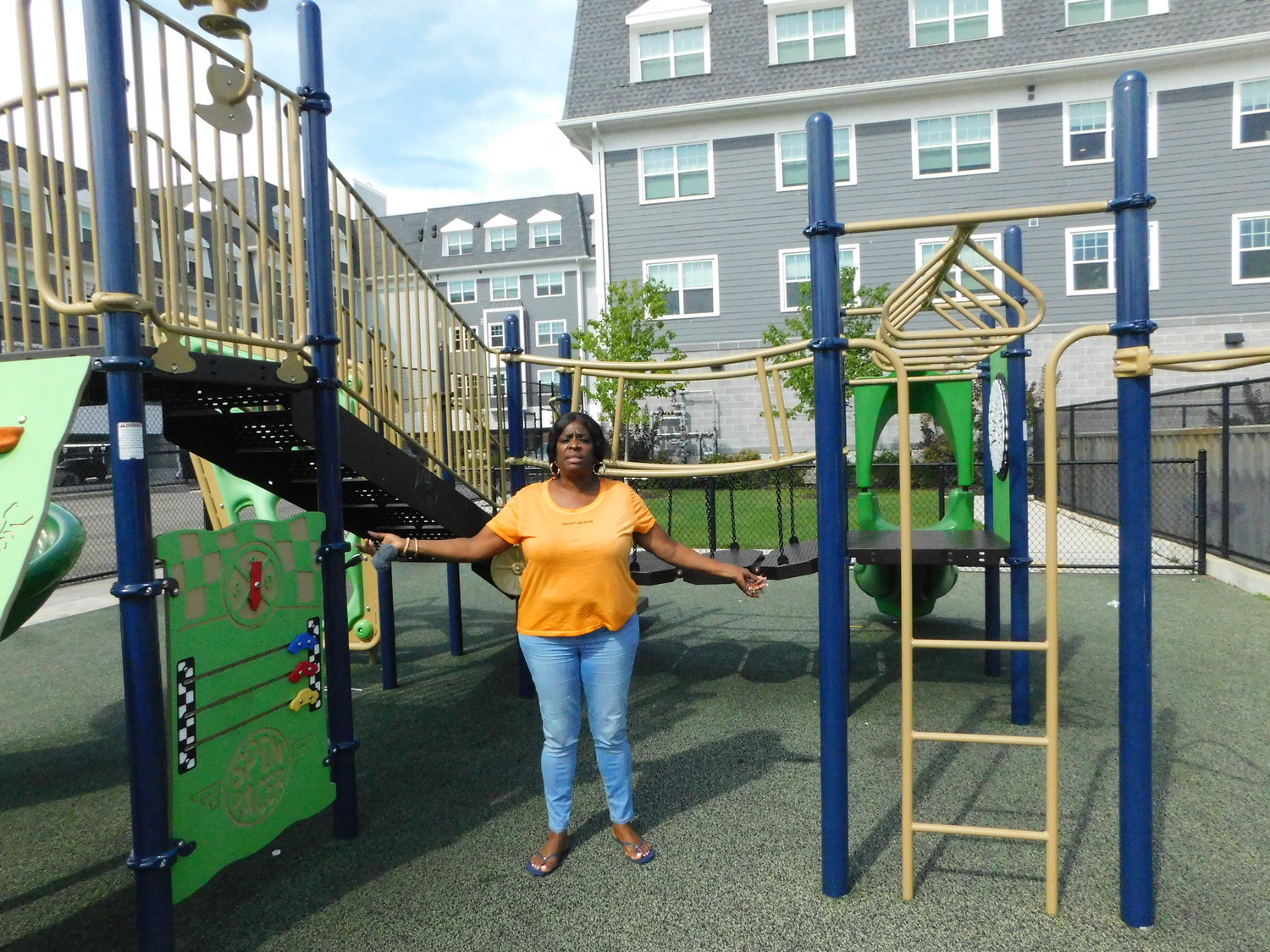 Charlene Ladson gestured toward the small fenced-in playground at the Moxey Rigby apartment complex. The playground does not accommodate older children.
Reine Bethany/Herald 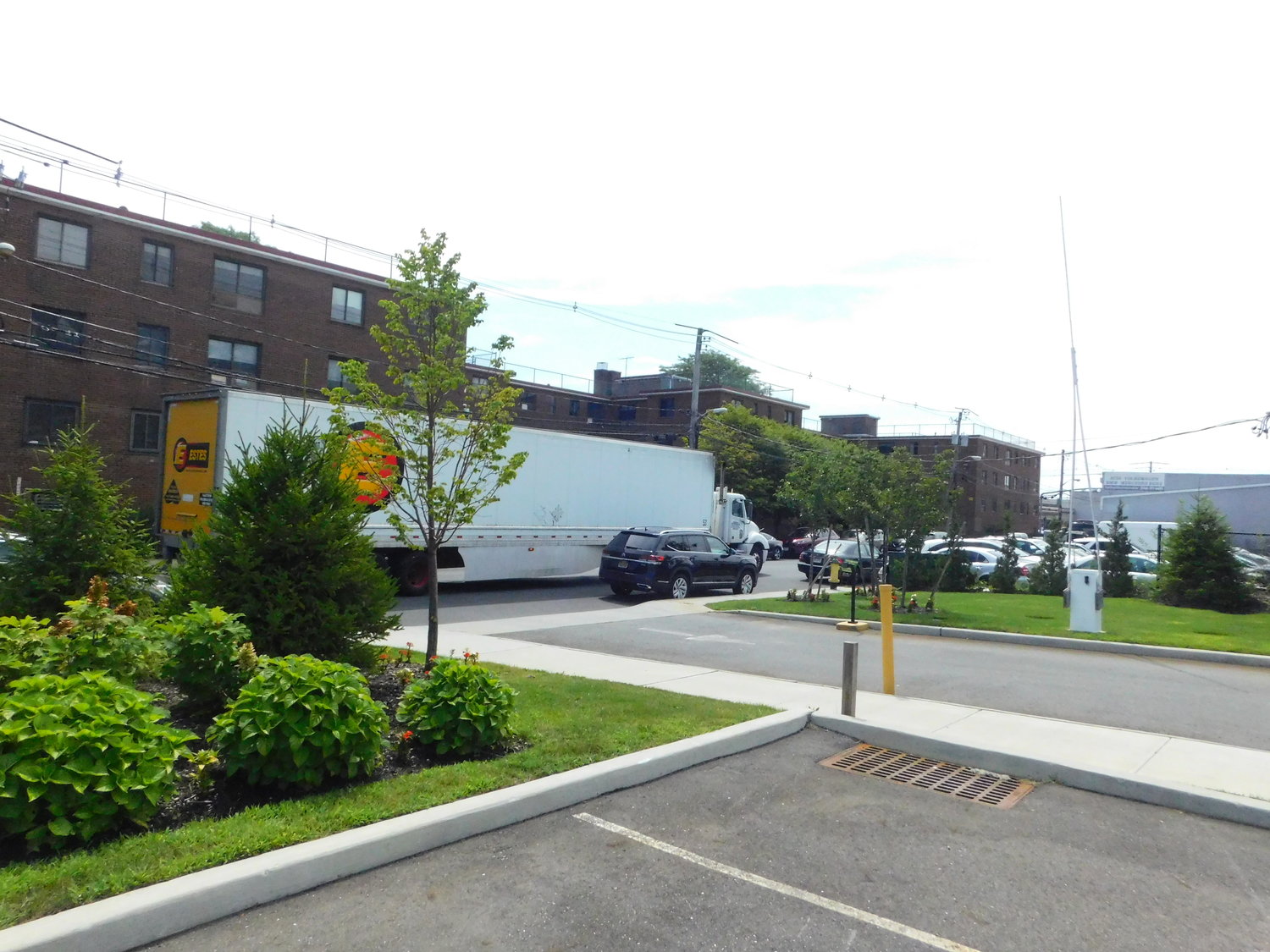 Cars and trucks on Buffalo Ave., waiting for the light at E. Merrick Road to change, frequently block the lone entrance to the Moxey A. Rigby housing complex, which is on Buffalo Ave. less than half a block from the intersection.
Reine Bethany/Herald
Previous Next
By Reine Bethany

Though the exterior of the Moxey A. Rigby public housing complex is pleasantly airy, the inconvenient design of its grounds, and the sluggish pace of repairs after a fire followed by water damage in Sept. 2021, have contributed to tenant discontent.

On one hand, the building has many advantages over the 1950s public housing complex that it replaced. The prior Moxey A. Rigby building suffered severe flood damage from Superstorm Sandy in late October of 2012. Located across Buffalo Avenue from the new one, it has sat unoccupied since the current one welcomed tenants in 2019.

When built, the old Moxey A. Rigby structure represented a big step forward in public housing. Moxey A. Rigby, Freeport’s first African American judge, also served as vice chairman of the Freeport Housing Authority, and the 1950s complex was named after him in the early 1960s.

The new Moxey A. Rigby building, which has modernized heating and cooling technology and improved security measures, is elevated above flood levels. None of its 101 residential units is located on the first floor, guaranteeing that even a superstorm would not flood residents out of their apartments.

Unfortunately for a number of tenants on the second and third floors, on Sept. 14, 2021, flood damage came not from a storm, but from a malfunctioning fire sprinkler system.

Inside, on the second and third levels, heavy brown paper still stretches along the floors of the hallways that got flooded by the fire sprinklers nearly a year ago.

The halls that were not damaged are covered by gray-brown flooring that looks like wooden boards, which coordinates cleanly with the smoothly painted tan walls and the blue trim around the apartment doors.  However, along some of the hallways not apparently damaged by the water, the molding is missing that covers the gap where the walls and floor don’t quite meet, a strangely unfinished appearance.

It is possible that the supply-chain shortages that have affected every industry since the pandemic have contributed to the delays in repairs and finishing. Efforts to call the building management for explanations had yielded no response by press time.

The water also affected flooring in several elevators, which has not been replaced. Tenants susing the elevators step onto dirty-looking wood subflooring.

The delayed repairs are but one of the effects of the flooding from the fire sprinklers.

“We were relocated,” said tenant Vicki Grodin. “We were in one of the cheapest hotels, with nothing offered to the parents that had children, as far as those who did not have transportation to get their kids from Westbury to Freeport schools.”

Both Grodin and Megraw ran into trouble paying for their hotel spaces.

“We were displaced  to the hotel,” said Megraw. “I reached out to Section 8 because the rent office here was not giving us information. They said that we would be back in our homes that same night. That turned into two weeks. I ended up spending two thousand dollars. I have the receipts.”

As the tenants come through that experience, there are other problems they would like to address: playground area, traffic that blocks the entrance driveway, and lack of signage.

The playground space consists of two confined, fenced-in areas. One is a blacktopped basketball court, just large enough to play games, with no space around it. The second, directly adjacent, is a play area for young children. It contains a small climbing gym. Its surface is compressed rubber, excellent padding if a youngster falls. But, pointed out Ladson, “There’s no swings. No benches for mothers to sit on while they watch their kids play.”

Ladson, who lived for 30 years at the old Moxey A. Rigby complex, pointed out how much bigger its playground area was. Unattended bushes now spill over the old complex’s tree-shaded walkways, which are dotted with numerous benches.

“The kids could walk right through here [safely up Albany Ave at the other side of the complex], up to Cleveland Park,” said Ladson, “and that was their green space. Even now, for the kids from the new Moxey Rigby, Cleveland is their green.”

Cleveland Park is almost directly across Buffalo Ave. from the new Moxey Rigby.

Cars and trucks rolled up and down Buffalo Avenue, past the lone entrance driveway to the apartment complex. Sandwiched between Pit Bull Motors on Merrick Road and a storage area filled with rusting containers and weed-overgrown cars, the entrance driveway is often blocked by traffic that backs up from the light at Buffalo Avenue and Merrick Road.

“If I’m coming from Merrick Road and I want to come in,” said Ladson, "I have to wait to get into this complex, so now you have traffic backed up on Merrick because people are waiting to turn left from Buffalo Ave. into the driveway.”

Tenants who approach the driveway by coming down Buffalo Ave. from Sunrise Highway at rush hour might have to wait through several lights before traffic progresses enough for them to make their turn.

An entrance from Merrick Road would ease the problem. At this time, cars may exit the parking lot onto Merrick Road, but cannot enter from there. The design causes delays for postal and other deliveries, too.

The issue of deliveries is compounded because there are no signs outside on either E. Merrick Rd. or Buffalo Ave. that name the building or its address.