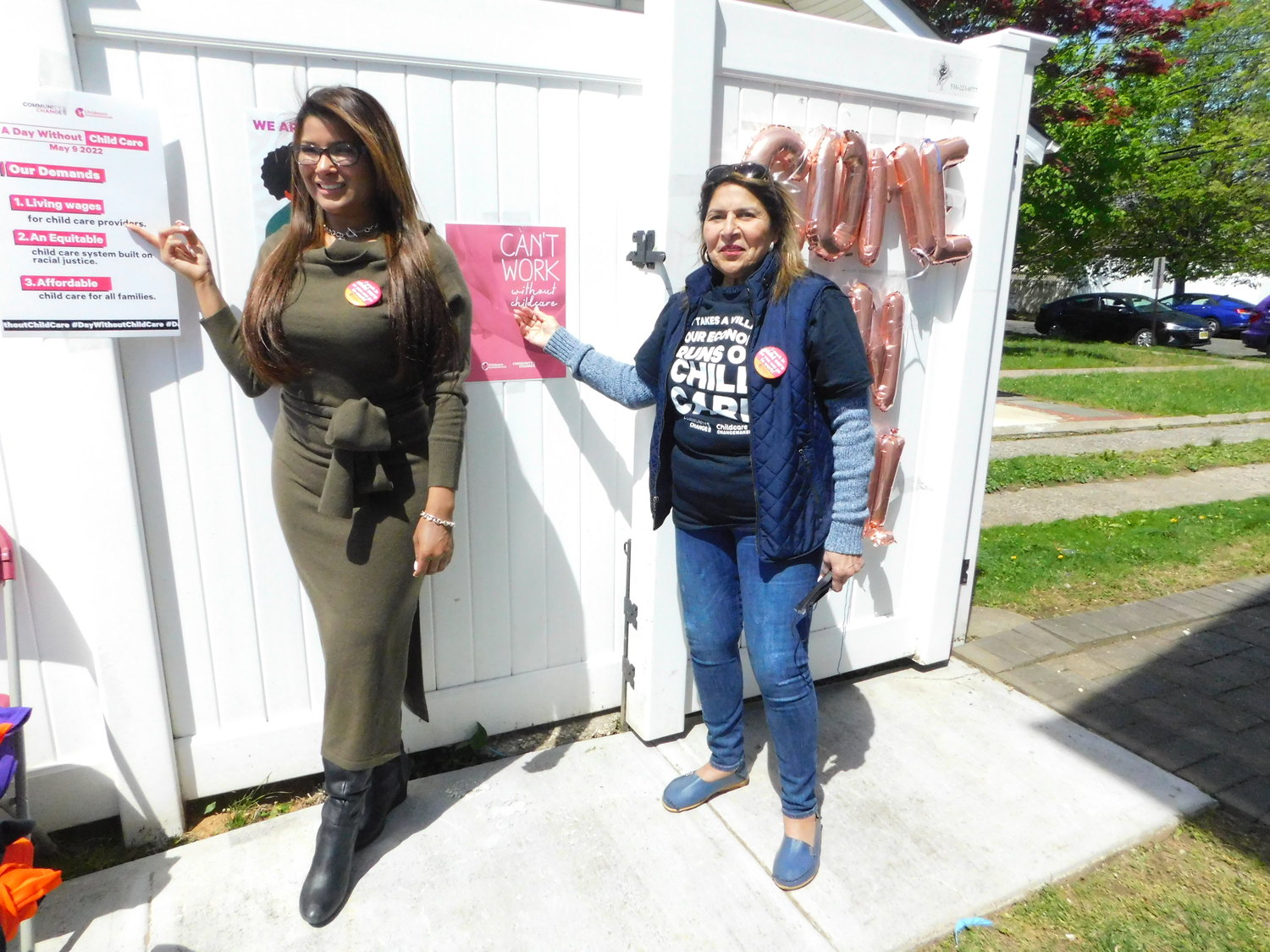 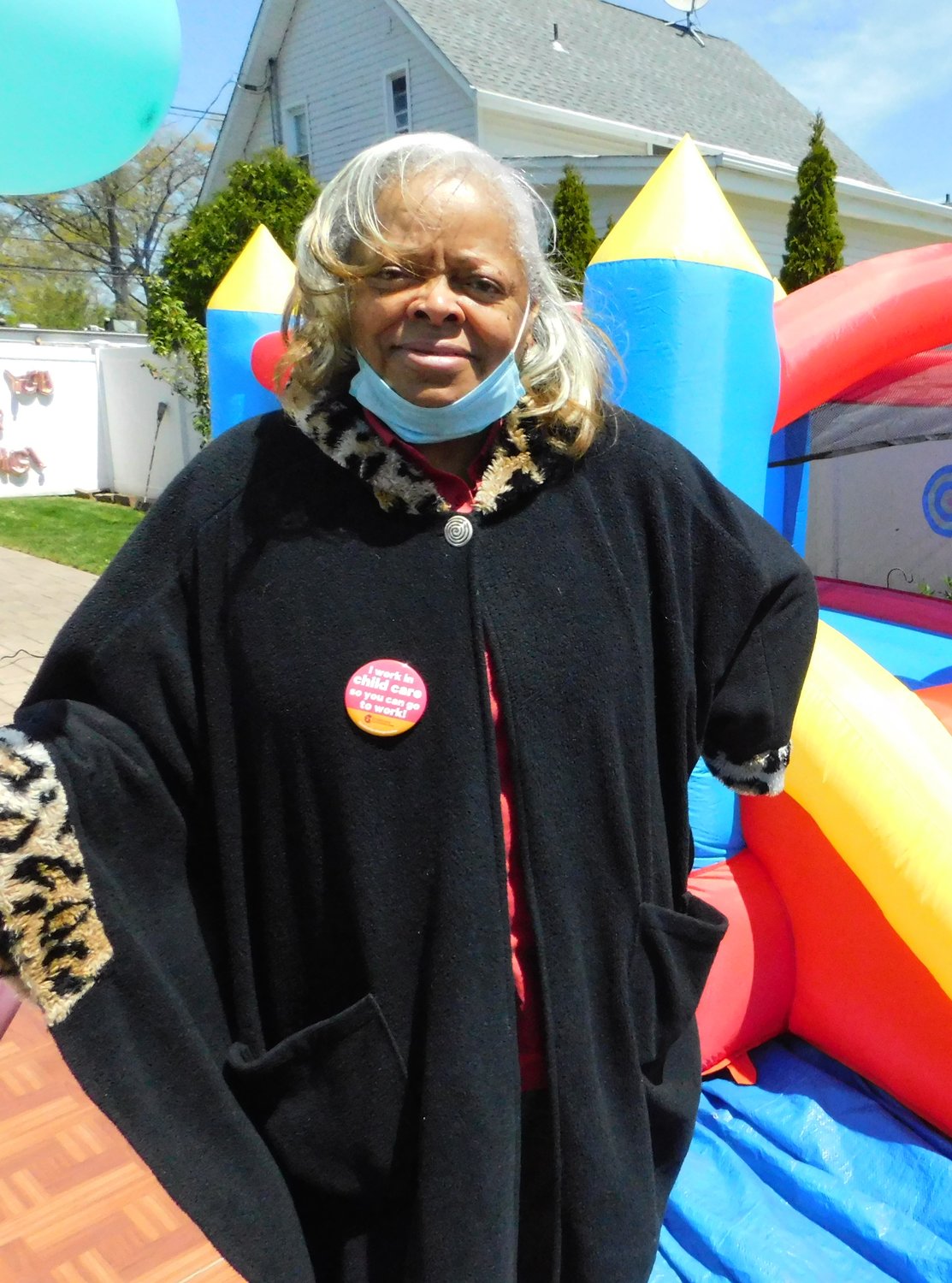 Beverly Lynshue-Chung, who has operated Little Stars Daycare, on Whaley Street in Freeport, for 23 years, came to Innovative Daycare Corp. to show support for A Day Without Childcare.
Reine Bethany/Herald 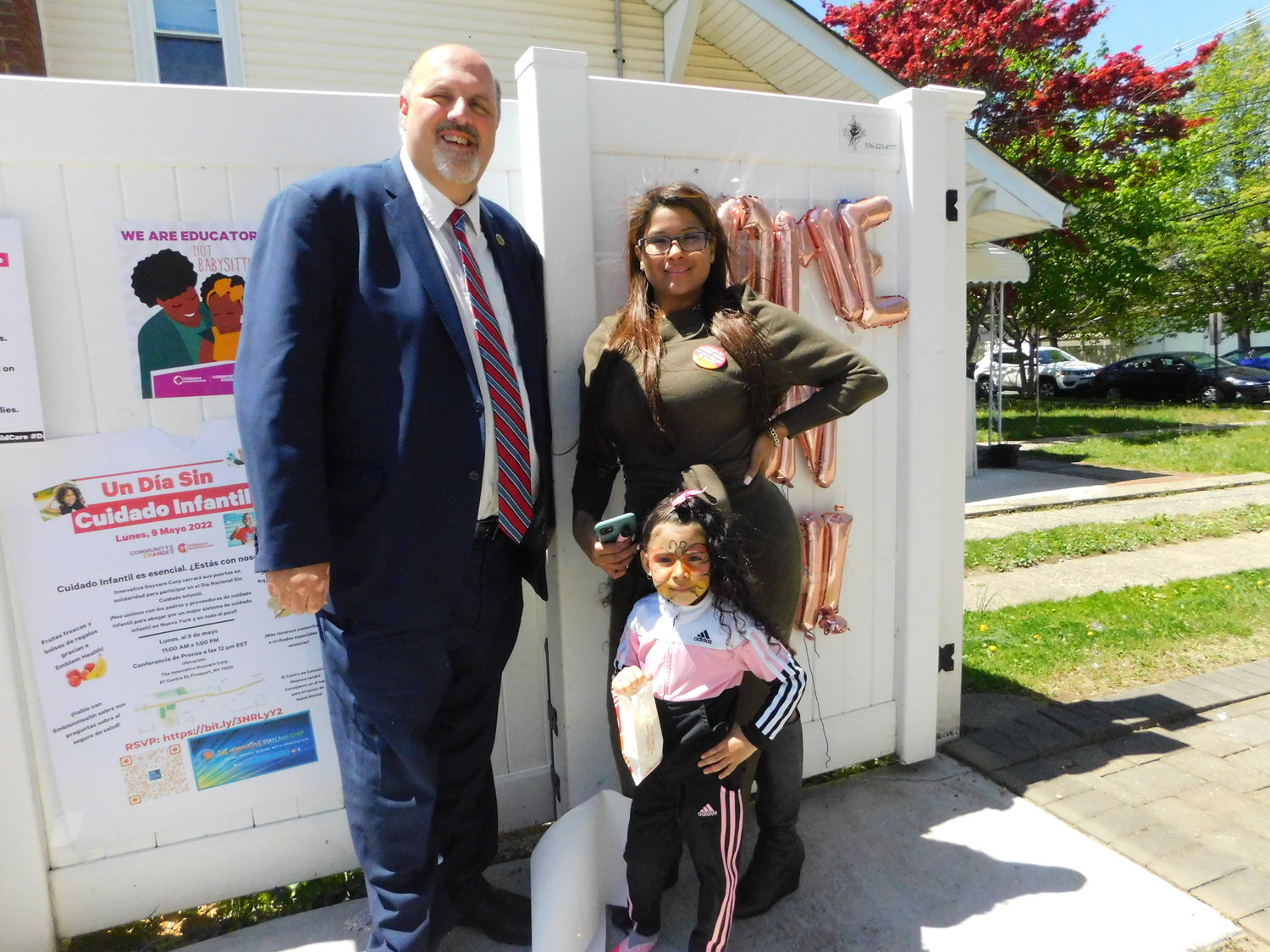 Children deserve the best. And their daily caretakers deserve far better than what they get.

Janna Rodriguez, 32, owner and operator of Innovative Daycare Corp., on Centre Street in Freeport, has been sending that message to politicians at every level of government for over two years.

Rodriguez invited her participating families, other child care providers, politicians and the public to her home-based business in support of a national event called A Day Without Childcare.

On Monday she closed the doors of her facility as if to strike, to gain government support for child care from the earliest stages of infancy, not only from the county or the state, but also from Congress.

Rodriguez decorated the backyard of her home with balloons, rented a small bounce house and laid out a long row of tables with catered food. Supportive organizations — Emblem Health, Docs for Tots and two Project Hope partners, Hispanic Counseling Center and the Mental Health Association of Nassau County — set up tables and spoke with visitors.

The Biden administration’s proposed Build Back Better Act would have elevated federal funding for child care. In March, however, the act failed to pass in the Senate.

Its downfall toughened Rodriguez’s resolve to keep advocating. “School for grades K through 12 is a publicly funded educational system,” she said. “Child care and early-childhood education are just as important. This is a human right.”

Some state legislators are listening. Innovative Daycare was chosen by State Senators Jabari Brisport and John Brooks, and Assembly members Andrew Hevesi and Judy Griffin, as one of two facilities to serve as visitation sites during a nine-week child care listening tour in November.

The state budget that was approved April 9 substantially raised the subsidy reimbursement for providers whose clientele includes families that qualify for help from each county’s Department of Social Services.

The upshot is that child care providers struggle with employee turnover.

“Prior to Covid, I had five employees,” said Mary Anne Arroyo, director of Sunshine and Dreams in Malverne since 1998. “Currently it’s been very difficult. … There were really no funds to keep them on.”

Beverly Lynshue-Chung, who has operated Little Stars Daycare on Whaley Street for 23 years, lost employees during the coronavirus pandemic because they were temporarily getting $600 in federal unemployment pay per week, while Lynshue-Chung could only pay staffers $400 to $500 per week.

“It was more economical for them to stay home,” Lynshue-Chung said. Even after the high unemployment pay ended, “They never came back. … I think we as providers should get more money in order to pay our staff.” She has had to reduce the clientele of her home-based business to six children, with one employee.

When providers can’t pay staff, they have to turn away applicants, meaning that parents and caregivers who need child care may not find it, and so can’t earn a full-time income.

“I don’t think it would be possible for me to work if I had no child care,” said Ashley Renaud, a Freeport resident who is a patient care coordinator at a medical facility in East Meadow. Her twin sons attend Innovative Daycare, and her 7-year-old daughter goes to New Visions School. “Paying child care and working is more economical.”

Jasmine Davilla, an accountant who lives and works in Queens, brings her 4-year-old daughter to Innovative Daycare. Without child care, Davilla said, “It would make my income take a huge loss.”

Attendees at the event expressed their appreciation for Rodriguez and her staff. John and Elizabeth Rein, of Rockville Centre, have been bringing their granddaughter to Innovative Daycare since last December.

“To have someone actually take care of your child and treat them as your own — no amount of money can cover that,” Davilla said. “Janna goes above and beyond for the children here. They don’t only just get fed, they get educated.”

Assistant State Comptroller Joseph Galante came to support the event. “Part of our work [in the comptroller’s office] is to conduct audits of state agencies and local governments,” Galante said, “and we have looked at childcare issues. … I’m so impressed with the work that Janna does, not just on behalf of her center but on behalf of the whole child care community.”

Galante added that he and his wife have two sons, ages 12 and 9. “If it wasn’t for the access to child care that my wife and I had when they were little,” he said, “we would never have been able to both keep our jobs and continue having that quality of life as well.”

Rodriguez keeps these testimonies in mind as she fights on for increased government support of child care facilities. “We’re working to ensure that Congress acts now, not tomorrow, not in two weeks — they need to act now,” she said. “Child care is part of the national infrastructure.”