Freeport gets into win column 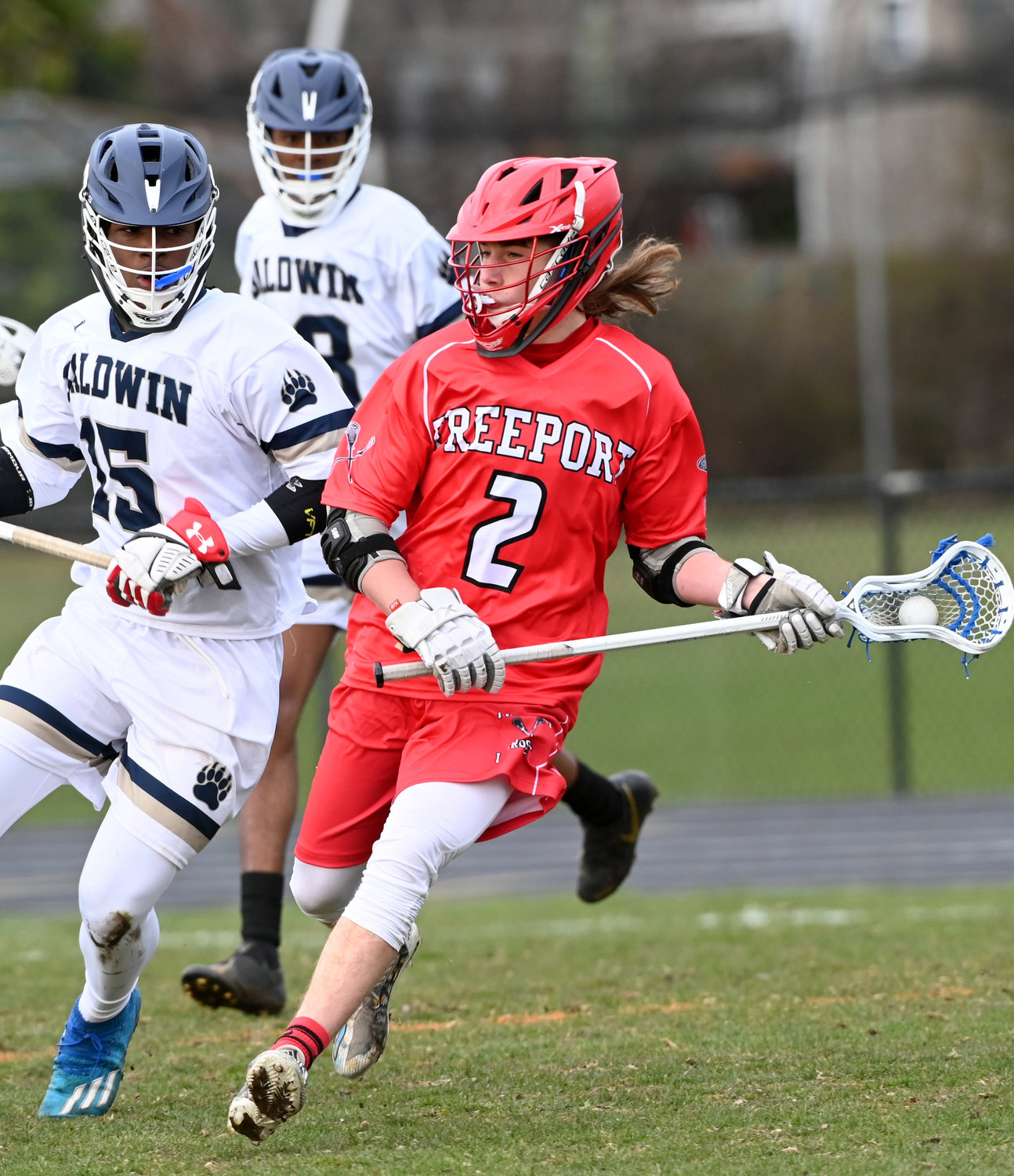 Justin Reinke, right, had a hat trick and two assists to lead the Red Devils to an 8-5 victory at Hempstead on May 3.
Donovan Berthoud/Herald
By Jamie deJong

Freeport boys’ lacrosse earned its first win of the season on May 3, as the Red Devils got off to an early lead and held on in route to an 8-5 victory at Hempstead.

Considering the amount of adversity and obstacles Freeport has had to overcome this season; the players and coaches were rightfully happy with the win. Head coach Harry Mohrman was short and sweet in his commentary following the game.

“They played very well,” Mohrman said. “Everything went in our favor. It’s always nice to win.”

One thing Freeport did a great job with was setting the tone early, as the Red Devils were in control from the opening whistle. Junior Julian Awalom started the scoring midway through the first, as he beat his defender right and snuck the ball past the goalie.

The goals started to come in bunches, as senior Justin Reinke scored two similar long-distance goals within a minute from Awalom’s finish. Reinke finished with 3 goals and 2 assists on the afternoon. Junior Lebron Lynshue scored shortly following this after he made an impressive defensive play on the ball. Hempstead snuck a goal in towards the end of the quarter, but Freeport took a 4-1 lead into the second. It was the first opening quarter the Red Devils won this year.

Following the strong start, the defense was instrumental in preserving the lead. Hempstead had ample opportunities and chances to chip into the lead, but the Red Devils defensive unit held up tremendously. Junior Isaiah Curtis generated plenty of turnovers, and his ability to field groundballs and flip possession was invaluable. Goalie Drapeau Javian was also rock solid in the net, as this win would not be possible without the 10 saves that he had. The finishing touches on this victory was when junior Matthew Drayton found a cutting Alec Bastien, who snuck it past the goalie and effectively made the game out of reach.

This was a much-needed victory for a Freeport team that has battled despite the unfortunate results up to this point. The Red Devils had come close in plenty of games, including a 4-5 loss to Great Neck South and a 9-11 loss to Valley Stream District, but fortunately were able to flip the script in this game.

The Red Devils have four games remaining on the schedule, as they will face Plainview, Hicksville, East Meadow, and Uniondale. Considering the youth present on the roster and the shortcomings earlier in the year, it would be a great moral victory for the team to show out well in the homestretch. Mohrman is confident his group can get the job done and add some more wins to their record if they play up to the level that he knows they can.

“We have four games left and they are all going to be tough games,” Mohrman said. “We’d obviously like to win them, and we can be competitive if we play up to our ability.”