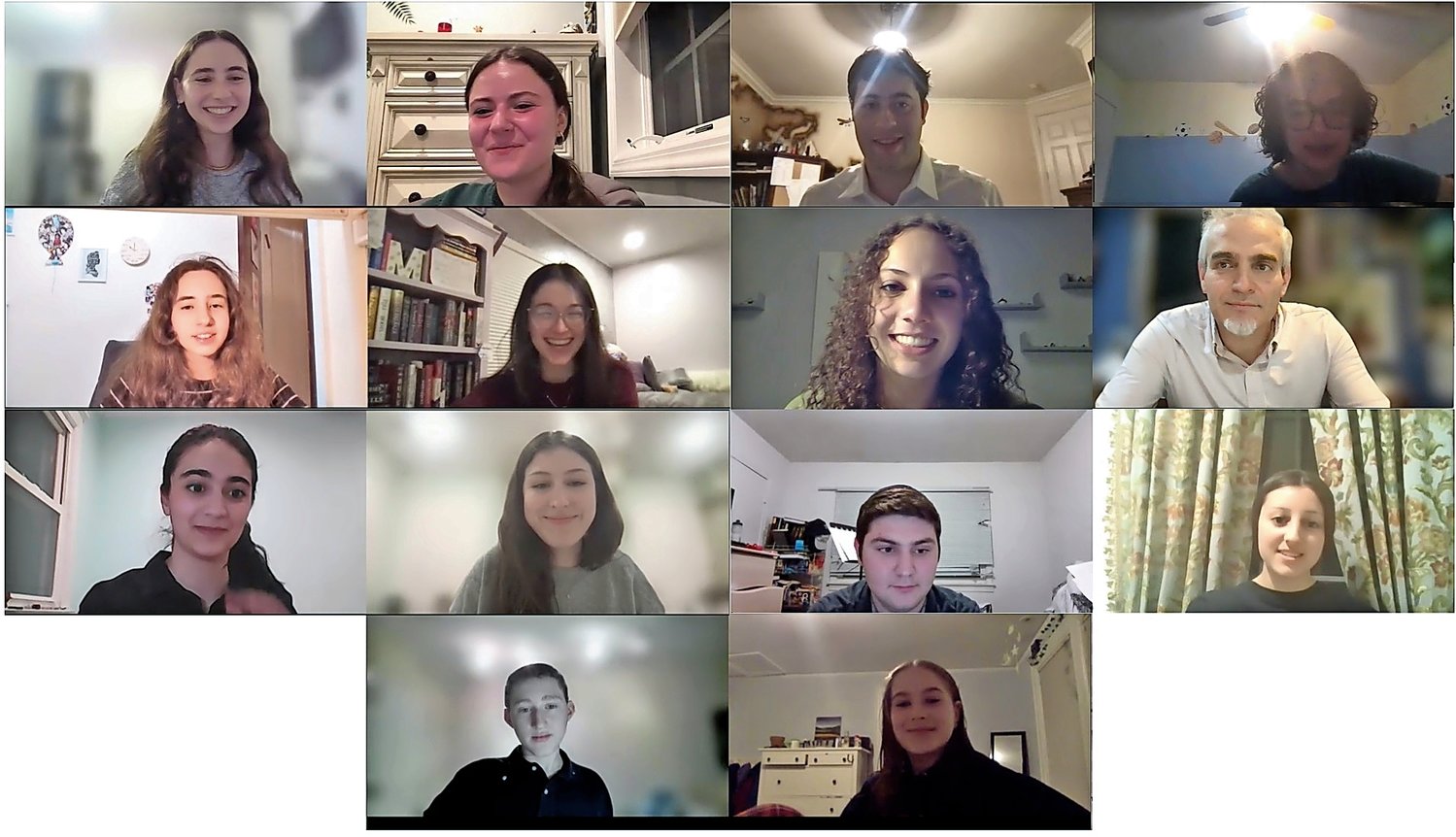 A virtual meeting of the South Shore Online District. From left at top were Kaitlin Pollack and Dasi Weill, of HAFTR; Benjamin Cohen, of Katz Yeshiva; and Sam Passner, of the Idea School. From left in the next row were Ilana Greenberg, of North Shore; Maytal Chelst, of Central; Maya Karasanto, of HAFTR; and Alex Libkind, the district coordinator. Below them, from left, were Batya Kimyagarov, of SKA; Lulu Morse and Andrew Bereger, of HAFTR; and Chole Mastour, of North Shore. At bottom, from left, were Leo Elgen, of Ramaz, and Isabel Waitman, of the Salantar Akiba Riverdale Academy.
Courtesy Alex Libkind
By Hernesto Galdamez

Hebrew Academy of the Five Towns & Rockaway High School’s debate team has been unable to compete in tournaments held on Fridays and Saturdays, and the team’s director and coach, Alex Libkind, decided that he needed to do something about that.

For observant Jews, no work can be done from sunset on Friday until sunset Saturday because of Shabbat — Hebrew for Sabbath, from the Hebrew word for rest.

That has created a problem for students from schools such as HAFTR who want to take part in National Speech & Debate Association competition. The association was founded in 1925, and students compete in its tournaments with the goal of advancing to its national competition.

“Historically, those tournaments have always been on Shabbat — Fridays and Saturdays,” Libkind said. As a result, it has been difficult for yeshivas to qualify for the association’s national championship.

Lauren Burdt, the organization’s director of competition and events, spoke with Libkind in March about having HAFTR take part in the NSDA’s online Springboard scrimmages on Tuesdays and Thursdays.

HAFTR began doing so that month. Four such Tuesday-and-Thursday scrimmages are offered during NSDA’s competitive season, which begins in September and runs through March.

“He shared that the Springboard rounds are some of the first NSDA events his students have been able to participate in,” Burdt said, “because most tournaments, including the district qualifying tournaments, are held on Fridays and Saturdays.”
Libkind was not focused on religion when he was growing up in St. Louis, but he became interested in debate as a teenager.

As a sophomore at Parkway North High School in St. Louis County, he recruited a teacher he remembers as Mrs. Monanco to be the faculty adviser of a newly created debate team. Two years later, Libkind recalled, the team competed in a series of events put on by the National Forensics League, which became the NSDA.

“I used to compete in all of these tournaments under Shabbat,” he said. “When I took over, I wanted to bring that same type of debate style. We applied this year for our own district with the NSDA, that would not have qualifying tournaments on Fridays and Saturdays, and got approved.”

The newly formed district has not yet finalized a name with the NSDA. For now, Libkind is calling it the South Shore Online District. Competitions take place on Zoom, and they give other yeshiva schools outside New York the chance to compete.

“Katz Yeshiva in Florida has been very active,” Libkind said. “A number of New Jersey schools have been quite active, and most of the local Five Towns Schools.”

As many as 15 schools are expect to join the new district, including Rambam Mesivta High School in Lawrence, North Shore Hebrew Academy in Great Neck, Stella K. Abraham High School for Girls in Hewlett Bay Park, and Hebrew Academy of Nassau County in Plainview.

“We’ve expanded . . . not just the opportunity, but also the offering,” Libkind said of the variety of events at tournaments. “Prior to this league, yeshiva schools were one type of debate. Now we offer more types of debate at every tournament.”

When she heard about Libkind’s idea, Allen quickly jumped on board. “He asked us to organize a letter from our head of school, asking for this designation and how important it was,” she said.

Students compete and earn points regardless of whether they win or lose in the tournaments. Based on points, they earn rankings. “I have students who are at 500 points, which is a certain level of designation,” Libkind explained. “It’s a very big honor that students can say, ‘I have achieved this rank in the National Speech & Debate Association.’”

As it turns out, HAFTR won’t have to leave the NSDA. Instead, it is “basically joining another league,” Libkind said. But yeshivas schools that aren’t part of the NSDA must join the newly formed league, which will take part in this year’s tournaments.

“We’re grateful for the work that Alex has done,” Burdt said, “to share the barriers that yeshiva schools face in accessing competition and advocate for a district to be created to encompass schools who face similar challenges.”