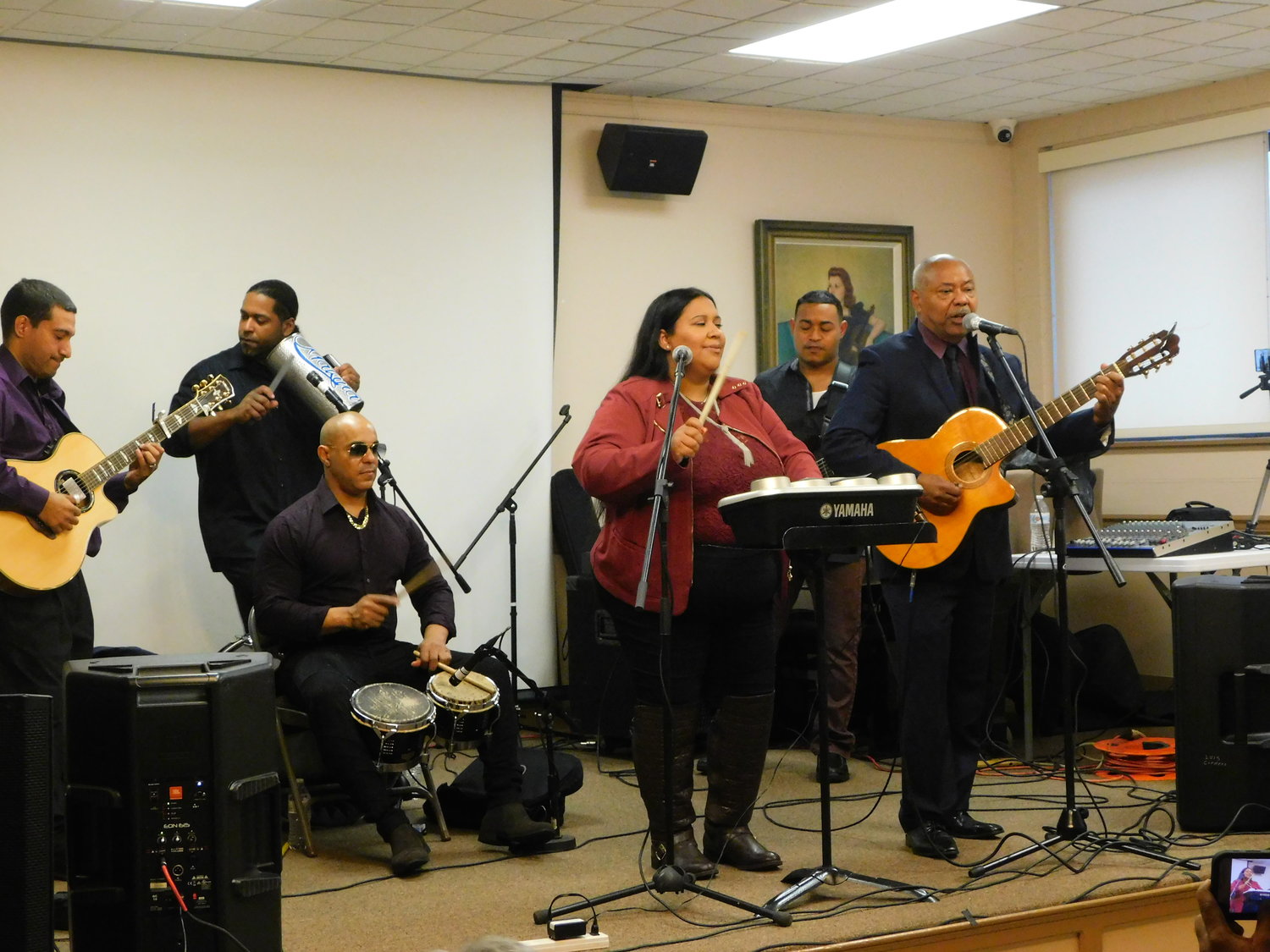 If Luis Cordero and his renowned band, Los Amigos del Amargue, had come to the Freeport Memorial Library on October 3 solely to celebrate Hispanic Heritage Month, their performance would have been fascinating in itself. But the musicians also showed that, while tradition is important, it is still first and foremost a venue for expressing the human heart.

Librarian Maryellen Cantanno introduced the program. She credited Nancy Solomon, director of Long Island Traditions, with connecting Los Amigos del Amargue with the library. Solomon spoke of her long association with Cordero and his family.

“I met Luis because he had just released a record and he was playing for a group at Holy Redeemer … and that’s when we started doing these concerts,” Solomon said, before yielding the mic to the band.

Cordero adhered to the merengue and bachata rhythms he learned as a child in the Dominican Republic. His band combined the traditional bachata instruments: requinta (lead guitar), segunda (rhythm guitar), bass guitar, bongos, and güira, a metal percussion instrument played by scraping it with a special brush. The band also uses the tambora, a Dominican drum that produces a broad variety of sounds depending on where and how it is struck.

Cordero’s daughter, Rosa Reyes, not only sang and played the electric drum, but acted as emcee, translating her father’s exposition of the music from Spanish into English.

“Thank you all for being here today and supporting us,” said Cordero through Rosa. “We’re going to have a happy day singing merengue and bachata and I want everyone to feel good!”

The band demonstrated the difference between quick-paced, get-up-on-your-feet merengue dance music and the more romantic, thoughtful bachata styles. After months of listening to virtual performances, the masked audience members were more than ready to respond to the live voices and instruments.

Shortly into the program, Cordero sang “Carta a mi padre” -- Letter to My Father.

Rosa introduced the song. “You gain respect for these people and families that have to go through poverty,” she said. Cordero, the oldest of 15 children, was born in the small town of Tenares in 1954. He recalled his mother handing him oranges from the family orchard when he was four years old, to sell on the street as part of the family income.

His family moved to Santo Domingo, capital of DR, in 1973, where he formed his first merengue and bachata band. In 1978, age 25, he emigrated illegally to New York, hoping for opportunities of success, but without English, he ended up dishwashing. Then he wrote his letter. Roughly translated, the lyrics would read, “Dear Father, I write to you this letter with love so I can speak to you about my life and to let you know how I am. I find myself in New York working like a cowboy. They only want to have me washing dishes and pots. I don’t speak any English. I want to go back to my country.”

With those lyrics, Cordero shifted his audience from listening only to the music for tradition’s sake into hearing the thoughts of his heart translated into pulsing sounds of guitar and percussion, and haunting melodies.

The band’s mastery of instruments and tradition kept the flow of thoughts lively, while Rosa explained how her father had created his first guitar from meat-packing styrofoam, a stick, and rubber bands. He would go to hear local bands perform and hold his hands in imitation of the positions of their hands on the guitar strings while he walked home, where he would implement those positions on his makeshift instrument. Later, he bought his first guitar and began to compose.

Through Rosa, Cordero spoke of the evanescence of inspiration.

“Anytime there’s an inspiration, you always have to ensure you record this melody as soon as possible,” Cordero said, “because if you forget the melody, it’s only words, not a song. It could be a poem, but if you forgot the melody, then it’s nothing.”

Cordero sang “Beautiful Lady,” which he had composed for his wife, and then “Quisqueya,” written as a love letter to his county. Quisqueya is the name that the indigenous Taino people had given their island before Christopher Columbus arrived and renamed the island Hispaniola.

Some songs had couples dancing merengue in the space in front of the stage. Other songs had people clapping along. It was a satisfying afternoon of Hispanic heritage and of joyful artistry.