Field is defended as an essential green space 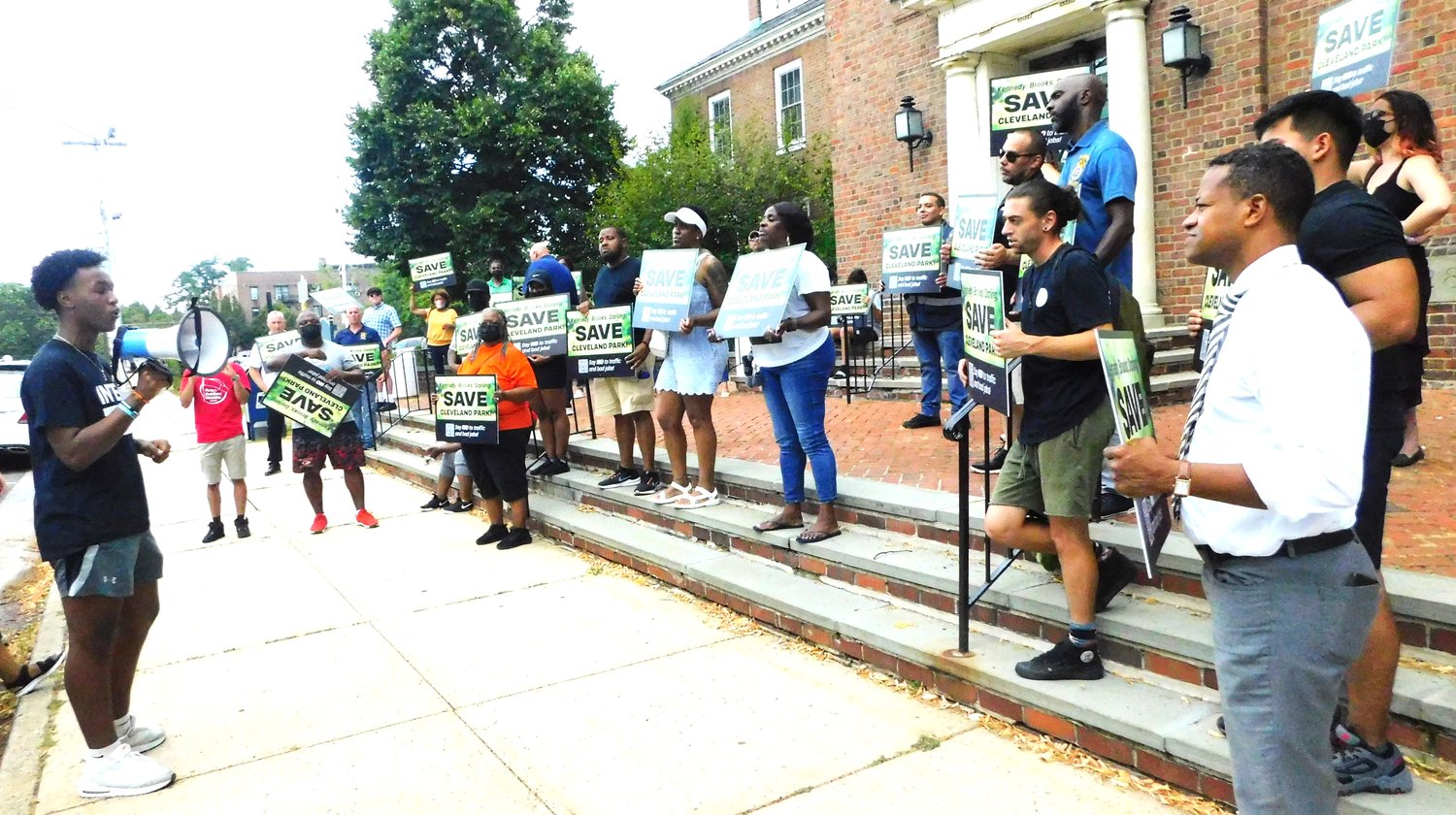 The Cleveland Avenue field (named William “Bill” Ashley Memorial Field in 2006) has been designated a parkland easement for Freeport Public Schools athletic practices since 1949. The village government disputes the easement based on the village’s ownership of the field since 1971, and claims the right to revoke the easement in order to use the field for business development.

Community protest  against the village government’s effort to replace the Cleveland Avenue athletic field with a warehouse continued Monday at a rally on the steps of the Freeport municipal building at 46 Ocean Avenue.

The rally preceded a public hearing of the Freeport village board to rezone Cleveland field and several surrounding parcels under an Industrial B classification.

Prior to the rally, Myles Hollingsworth, an alumnus of the Freeport Public Schools and a pre-law student at Howard University, articulated the bottom-line viewpoint of the protestors.

“We’re clearly saying we want the preservation of green space,” Hollingsworth said. “If that means allowing for some kind of hybrid model of not intruding on green space, while also developing business, that’s a conversation we’re ready to have. But if the model looks like removing any inch of green space, it’s a full strong no.”

Hollingsworth said he grew up practicing athletics on the disputed field, often called “Cleveland Park.” He played on both  school and private teams that used the park.

“When Randall Park was flooded out or rained out,” Hollingsworth said, “my soccer team would come to Cleveland Park to practice. I spent many, many hours, both day and night, hot and cold weather, practicing at Cleveland Park.”

Hollingsworth added that the field was also used regularly as an event space by local organizations.

“It is a full community being affected,” said Hollingsworth.

“Long Island is a sandbar,” Meraday said. “If you have heavy rains, there’s no place for the water to go, so it will accumulate and puddle in places like Randall Park, like Cleveland, like Cow Meadow.”

Meraday said the water issues were less of a problem at Cleveland Avenue than at the other two parks, which are situated about a mile southward. Cow Meadow, in fact, sits directly on the south shore.

She added that school buses bring children to athletic practice, but parents are expected to pick the children up afterward. If parents can’t do so, NICE buses along Merrick Road or Sunrise Highway have helped children return home from Cleveland Avenue, or the children walk. Cow Meadow Park is much less accessible via bus or walking.

The village government is requesting that NICE institute new public bus routes between Cow Meadow,  the high school at 50 Brookside Avenue, and the residential area between the high school and Meadowbrook Parkway.

In the village’s narrative, it was always understood that all school athletic activities would ultimately be transferred from Cleveland Avenue to Cow Meadow, and Cleveland Park would then be devoted to business development.

The school district does not agree. As the two parties are separate governments under New York State law, they are now locked in a lengthy legal battle over the school district’s right to the field.

At the rally, activist Kiana Abady, a former Freeport resident, questioned the village government’s insistence that the only way to go forward with economic development is to destroy Cleveland Park.

“There is nowhere else in the already designated industrial side of Freeport that a warehouse can go?” Abady said.

The village government characterizes the area directly surrounding the Cleveland Avenue athletic field as industrial. That area is  just north of Merrick Road and has residences nearby, such as the 100-unit Moxey Rigby apartment building and  the Liberty Park Apartments on Rev. E. Mitchell Mallette Drive. It also has many businesses, such as the shopping park containing Target that is directly across Buffalo Avenue from the Cleveland Avenue field, Pit Bull motors, and BMW of Freeport Service Center on Cleveland Avenue.

The industrial park to which Abady referred, however, is  an extensive nonresidential area to the south, across Merrick Road.

Hollingsworth called on Governor Kathy Hochul to veto bill S8541A/A10002A, which Senator John Brooks and Assemblywoman Taylor Darling sponsored in the state legislature. The bill would allow Freeport to alienate the Cleveland Avenue parkland as long as an equivalent substitute is supplied to the community. If Hochul signs the bill, the village can then remove the parkland designation.

“I’ve spoken to Governor Hochul’s office,” Hollingsworth said. “They have agreed that this is not something that should be happening in a minority community. So, Governor, veto the bill!”

Freeporter Antoine Andrews spoke as a representative of Teamsters Local 804 and Teamsters Joint Council 16. He addressed the village government’s claim that the last mile distribution warehouse would bring 320 jobs to the village, saying the jobs would be undesirable.

“Not for bad jobs, not for traffic, not for pollution, not for displacement of our children from having somewhere to play,” said Andrews.

“I’m letting you guys know we’re here to stand up for you.”

“My team uses Cleveland Field as our home practice site,” said Jimmy Jones, a Freeport Schools assistant coach. “I’m not saying that I do not want the Cow Meadow project to be done, but I want it to be done in conjunction with Cleveland Park.”

All of the speakers touched on the topic of race and class, pointing out that the people who live closest to Cleveland Park are mostly non-white and working-class, with many immigrants. Nassau County Legislator Carrié Solages attended the rally in support of the protestors.

“This is a prime example of environmental racism,” Solages said. “You don’t see them building this in Garden City, but they’re coming to Freeport. Unacceptable!”