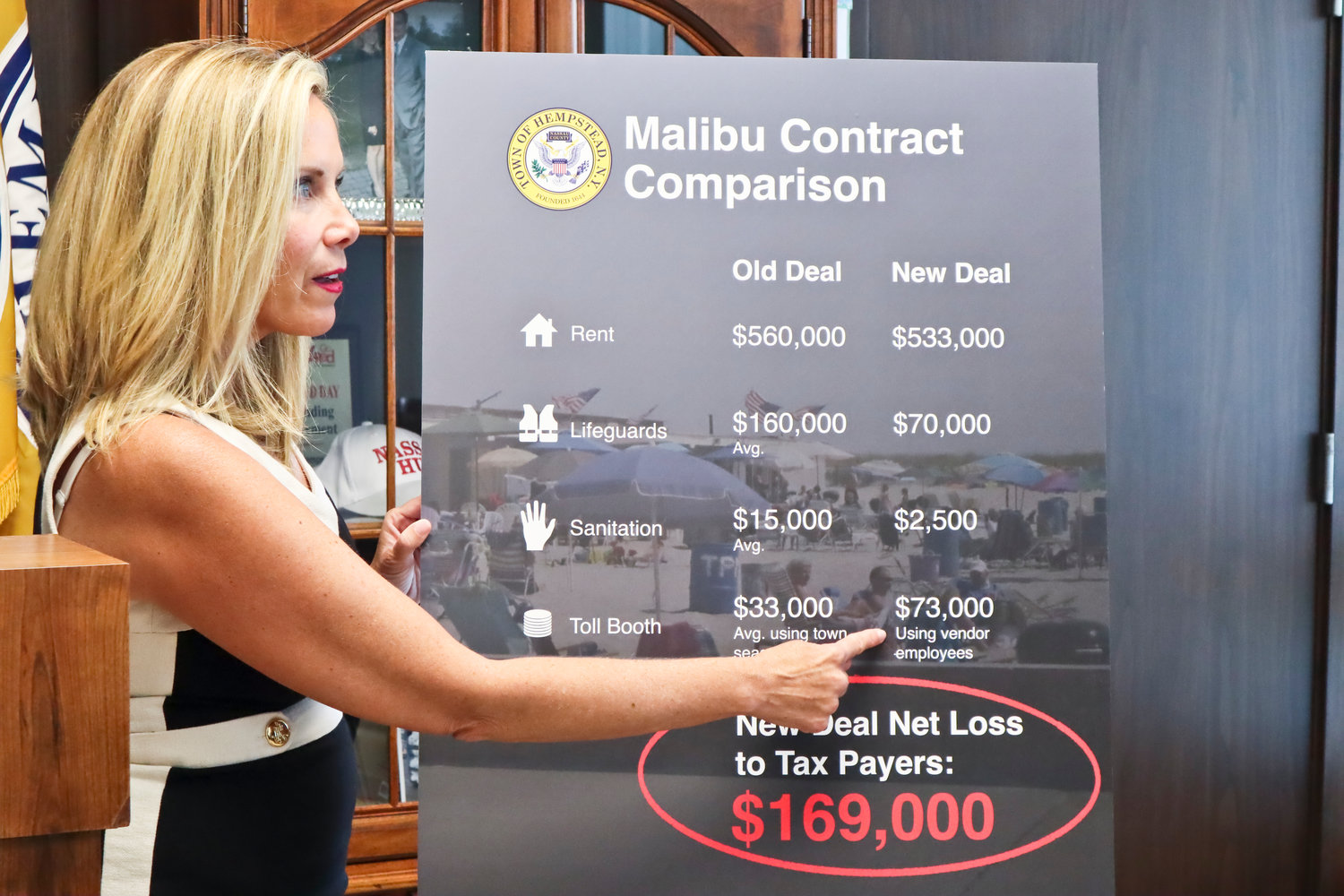 Gillen broke down the numbers of the new contract in front of the press.
Darwin Yanes/Herald
By Nadya Nataly and Darwin Yanes

During a July 16 news conference, Gillen said the Dover Group was awarded a “lucrative five-year contract” and “sweetheart deal” to continue operating the Malibu Shore Club on town property in Lido Beach. That deal, which was first negotiated in 2009, will cost taxpayers $169,000 a year, she said.

“She’s wrong,” said Butch Yamali, of Merrick, the Dover Group owner. “...I think that she read the contract in the dark. She didn’t read it properly.”

Yamali accused the Democratic supervisor of distorting the contract terms for political gain in an election year. Town of Hempstead Councilwoman Dorothy Goosby, a Democrat, said Gillen was “politicizing the matter” “by releasing erroneous financial information.”

The Dover Group has a number of restaurants around Long Island, including Hudson’s on the Mile in Freeport.

According to Gillen, the contract should not have been executed without a board resolution or notification to her office that such a deal was under way. “It’s curious to me that [the Dover Group] did not think they needed to speak to the supervisor at all about a new five-year deal with the Town of Hempstead,” Gillen said.

She said Lino was “not an elected representative of the Town of Hempstead,” and he did not have authority to extend the contract.

Yamali said the original contract does allow Lino to execute the extension. The initial contract states that a commissioner and the town comptroller can extend it, documents show.

Gillen also said Yamali previously paid $160,000 for lifeguards under the old contract, but under the new one, he pays $70,000. Yamali said in response that he has annually paid an average of $68,000 a year for lifeguards, so the new contract specified $70,000 a year.

Yamali said that in exchange for staffing the parking booths and collecting parking revenue, the town will reimburse $72,800 to Dover. Before this agreement, Gillen said, the town had seasonal workers run the booths at a cost of $33,000 a year.

Lino told Newsday that some residents used to harass the town booth workers, who were often teenagers, because of what they considered high entrance fees, and that led the town to ask Dover to take over operation of the booths. He added that all revenue from the booths will go to the town.

Under the old contract, Gillen said, Yamali paid the town $15,000 a year for sanitation. Under the new contract, however, he will pay $2,500 a year, she said.

According to Goosby, the old contract did not include sanitation costs. Yamali said that he has paid out of pocket for sanitation and uses a private company. He added that he only has to pay Hempstead if town labor is used to collect garbage on the property.

Yamali took issue with Gillen’s referring to the contract extension as a “backroom deal.” “We pay far more than $560,000 a year,” he said. “The Town Board voted in 2009, and they gave a commissioner permission to renegotiate.”

When Yamali took over the property, he said he took a broken place and fixed it up without cost to the town. “We spent in the millions on it,” he said. “This is politically motivated.”

The contract change came after the town increased nonresidents’ parking fees at town beaches, including Malibu, from $25 to $50.

Gillen and other Town Board members are calling for an investigation and for the town compliance officer, Thomas Willdigg, a former Nassau County police detective, to review the matter.

“The Town Board agrees that oversight of contracts is very important, and that’s why the board created the compliance officer position, and we have called upon him to review the agreement between the town and Malibu,” Councilwoman Erin King Sweeney, a Republican, said in a statement.

King Sweeney has proposed a board resolution prohibiting contract amendments without board approval, according to a statement by Councilman Bruce Blakeman, also a Republican.

“This matter has been referred to the independent compliance officer, [Willdigg,] for a review of this matter, and upon completion of the review, a determination will be made as to whether the Town Board needs to take any action,” Blakeman said.

Lino and Conroy could not be reached for comment as the Herald went to press.