Village of Freeport welcomes back business destroyed in car accident 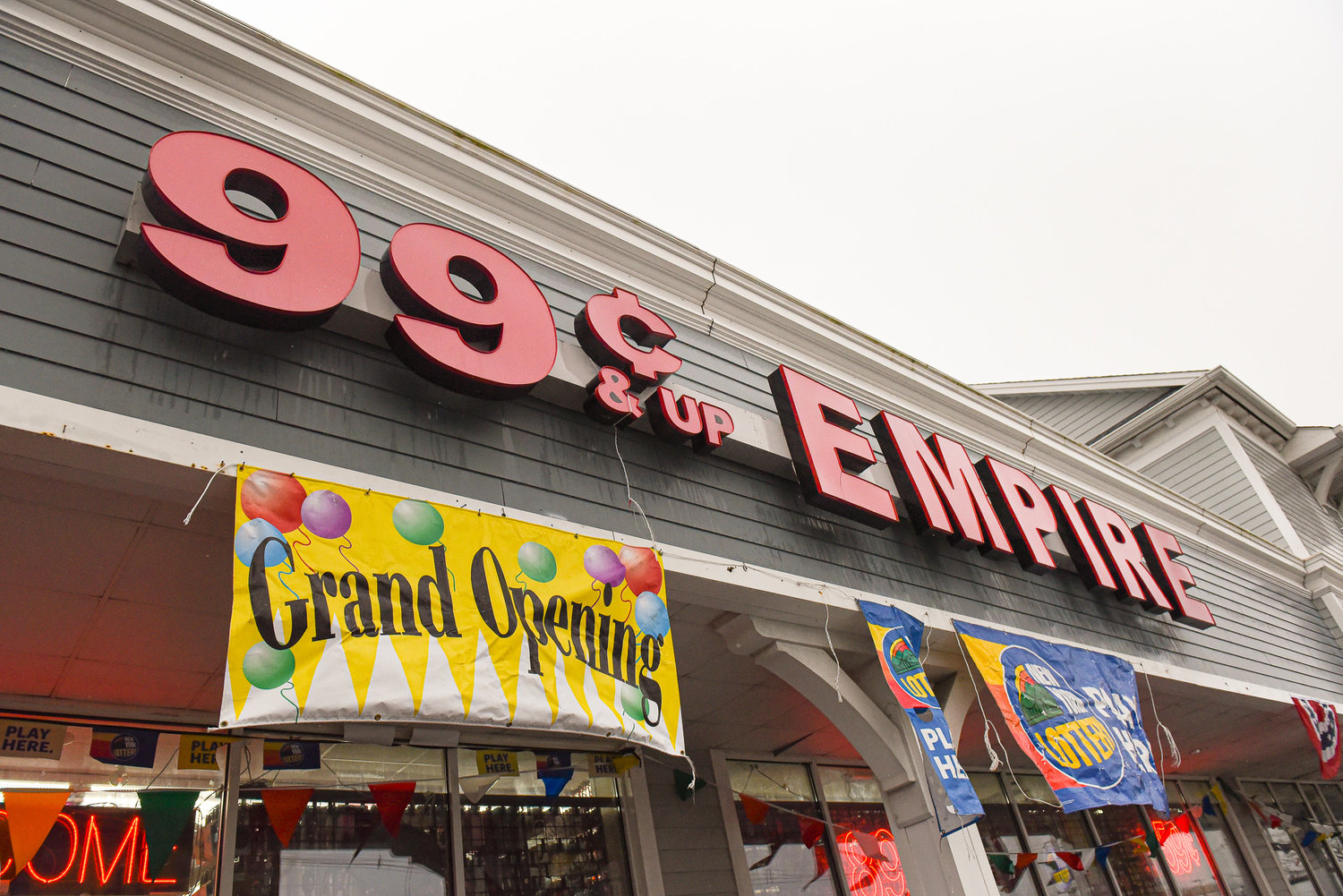 99¢ & Up Empire has reopened -- 8 months after a speeding car crashed into the wall that divided it from the Subway next door.
Randy Milteer/Inc. Village of Freeport 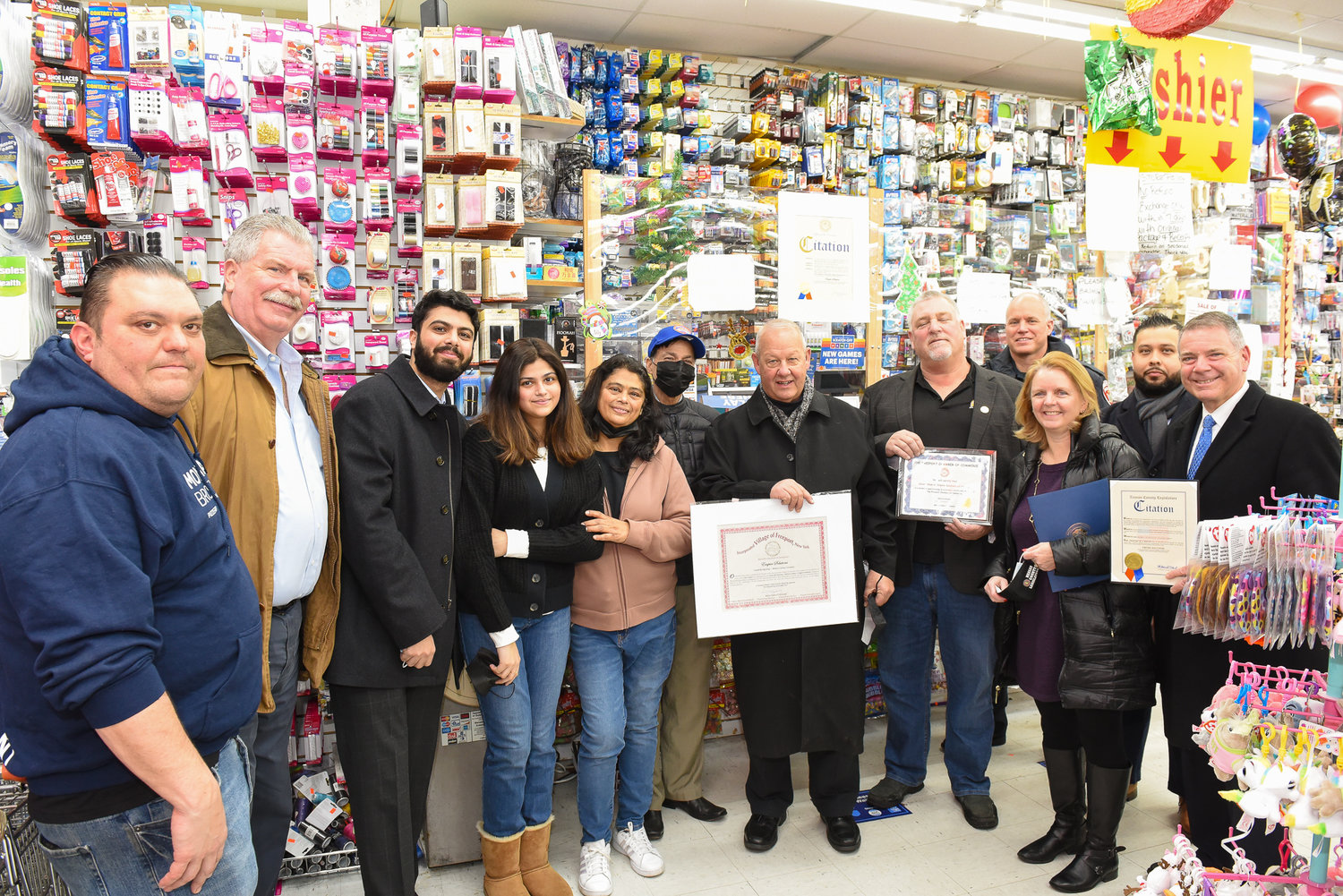 On Wednesday, Jan. 5, Village of Freeport Mayor Robert T. Kennedy and Freeport Chamber of Commerce President Ben Jackson were joined by Nassau County Legislators Steve Rhoads and Debra Mulé to officially reopen and welcome back a local business that was destroyed when a vehicle collided with the storefront on March 5, 2021.

The store, 99¢ & Up Empire, has been successfully owned and operated by Albert and Nadra Khan at 393 South Main St. since 2013. The Khans live in Valley Stream. They bought the store when their son Mohammad, now 26, was just starting college and their daughter Maham, now 19, was in middle school.

“We’ve been happily part of the Freeport community for the last 8 years,” said Mohammad. “A lot of our success is because of my dad’s perseverance. This is a new industry for him. He used to work in sales. He had his own franchise with ADT, the security system. He did that for many years and then we transitioned over to this business.”

Mohammad is now in his last year as a medical student at SUNY Downstate in Brooklyn. Maham attends John Jay College of Criminal Justice in Manhattan. Both of them still come to help out in the store whenever they can.

“This is my dad’s labor of love,” Mohammad said. “He’s always on the floor – he’s not the kind of guy that’s cooped up in an office. He loves being on the floor interacting with the customers, doing the heavy lifting [of the boxes of product]. … He does it because he loves the business.”

The store is located in a strip mall on the east side of South Main St. exactly where Atlantic Avenue dead-ends. The adjoining business on the north side is a Subway. At about 10:30 p.m. on March 5, a car speeding east on Atlantic Avenue failed to turn onto South Main, but instead barreled straight toward the mall. The car struck the curb, left the ground, and smashed onto a parked car in the mall lot. Its momentum then catapulted it through the Subway front window, striking the wall that divided Subway from 99¢ & Up.

As reported by the Freeport Fire Department on their Facebook page on March 6:

“Late last night, into earlier this morning, our members responded to a scene that looked like something out of a movie. Dispatched as a reported building fire on S Main St, quick-arriving units found a car into a building that had overturned, was on fire, and had the occupant of the vehicle heavily entrapped. Truck 1 working side by side with the NCPD ESU division, an extrication began of the occupant. The occupant was freed and in the hands of EMS after an approximately 45-60 minute operation. The fire that resulted from the accident was extinguished by additional personnel from responding pumper companies. … Miraculously, the occupant was handed off to EMS conscious, but was transported to a hospital with unknown injuries.”

At the time of the accident, the Khans were at home, but Montana’s Pizzeria & Catering at 385 South Main St. was open.

“Frank from Montana’s Pizza is one of our good friends,” said Mohammad, “so he gave my mother a call and we rushed down as soon as we heard.”

The Khans had just received their second dose of the Covid vaccine and were feeling its effects, but they scrambled into their coats and darted through the cold night air to their car. The scene that greeted them on South Main St. was shocking.

“There was definitely fire damage to our store,” said Mohammad, “because the wall separating the stores was a point of impact, so what was going on in Subway spread into our store, and part of the parked car went into our store as well. At the time we felt like the world was crumbling around us, because it’s just so much devastation to something we’ve worked for years to build, and that’s our project, that’s our livelihood, so seeing all the flames and all the damage, that was a terrible, terrible sight for us.”

Throughout the next 8 months after the accident, Albert and Nadra endured endless insurance claim procedures. They slogged through building permits and supply-chain delays. Mohammad and Maham continued their schooling, but put in all the time they could to help refurbish the property, re-installing the sneeze guards and social distancing tape, sanitizing every inch, while their parents took care of the business matters.

At the triumphant grand opening last week, the Khans were presented with a Village of Freeport citation for their resiliency and commitment to the Freeport community. The Freeport Chamber of Commerce and Mayor Kennedy held an official ribbon cutting at the location on South Main Street.

“The past two years have been tremendously challenging for our local businesses -- harder on no one than Albert Kahn and 99¢ & Up Empire,” said Kennedy. “When this storefront was destroyed, Mr. and Mrs. Khan could have chosen to relocate, or shut their doors entirely. However, they displayed admirable resilience and now return ‘Freeport Strong.’ We wish them continued success and thank them for their commitment to Freeport. We look forward to supporting them as they recover from this hardship.”

A February review of the business on Yelp encapsulates both the norm to which the Khans are returning and the difficulties they have overcome: “Excellent selection of merchandise … easy free parking right in front … great prices on everything. Friendly and helpful staff and owners. We need to support these small family-owned businesses now during these critical times, or they will be gone.”