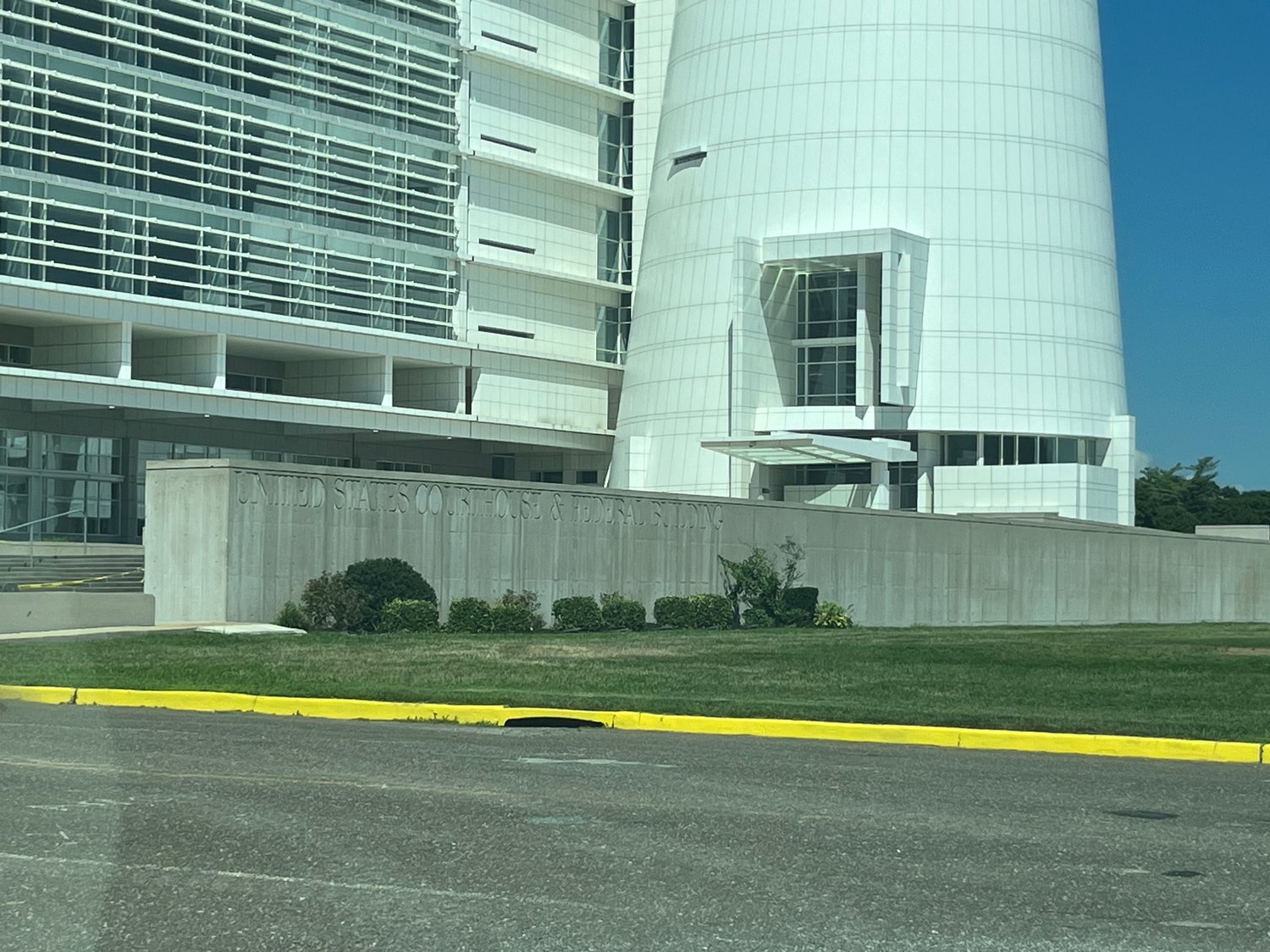 On Aug. 3, the Chabad of the Beaches and the Village of Atlantic Beach went to the United States Courthouse in Central Islip in an eminent domain legal-battle.
Lisa Margaria/Herald

Both the municipality and the religious organization plan to use the land for community centers for all residents. The village also wants to build a recreational facility, which would house beach lifeguard operations.

The legal wrangling between Atlantic Beach village and the Chabad of the Beaches will continue, as both parties will send briefings to the judge after the Aug. 3 federal court hearing. Justice Joanna Seybert is expected to render a decision within the next four months.

Seven representatives of the Chabad that is in Long Beach — including Rabbi Eli Goodman, a witness — sat on the right side of the United States Courthouse in Central Islip while three representatives of Atlantic Beach — including Deputy Mayor Edward Sullivan, a witness — sat on the left. Goodman was seen reading the Torah during a courtroom break.

For nearly six hours, the parties took turns stating their case before Seybert over 2025 and 2035 Park St., which the Chabad wanted to buy last November for $950,000 from M.A. Salazar Inc., a real estate company.

“We were pleased to provide argument to the Court,” Chabad attorney Jeremy Dys wrote in an email, “and look forward to receiving the Court’s decision. Chabad of the Beaches is eager to serve the Atlantic Beach community.”

“The Village had a legal right to acquire the property under the eminent domain law,” Mayor George Pappas wrote in a statement, “and the process was conducted with fairness to all and bias towards none. We are confident the Village’s actions will be upheld by the federal court, and all of our residents will be able to enjoy the community spaces planned for the properties.”

Chabad representatives claim that the village only wanted the land after the Chabad held a holiday celebration on Dec. 2, 2021, where Mayor George Pappas was invited. Pappas responded, asking for the time of the event, but did not show up. In a tit for tat debate village representatives said that on the same day that the Chabad responded to Pappas, he was busy at another village holiday event which Goodman was also invited to. Goodman did not attend the event Pappas attended.

The Chabad, which claims that anti-Semitism is propelling the village’s eminent domain action, also submitted antisemetic Facebook posts from the private Village of Atlantic Beach group as evidence of antisemitism. The village agreed that the posts were distasteful.

The Chabad noted that, though the village was supposedly looking at the property one year before the Chabad, it had no urgency to take the land until the Chabad’s religious candle lighting ceremony at 2025 Park Street on Dec. 2, 2021. One day after the ceremony, on Dec. 3, the village’s attorney, Dominick Minerva, filed the environmental assessment form. Ten days after the ceremony, the board voted to go through with eminent domain and held a public hearing about it one month later.

In the village’s defense, there was no malicious intent and the timing of this incident was coincidental, representatives noted. The property is valuable and attractive to anyone, village representatives said, adding that both parties were taking steps to acquire the property at the same time, but the Chabad got it first. Sullivan testified that the village outgrew it’s office and that village lifeguards have been meeting on a street corner — possible proof that the property is in public need.

“In order to take a piece of property from a religious institution, the village has got to provide a really compelling justification,” Dys previously told the Herald.

Jennifer Polovetsky, co-chair of the Eminent Domain Practice with New York law firm Herrick, Feinstein, disagreed. “As long as the village has followed the laws — the eminent domain procedure laws — and follows all other relevant laws in the planning for the acquisition of this property, it should be considered a valid taking under eminent domain, or eminent domain purposes.” Polovetsky said.