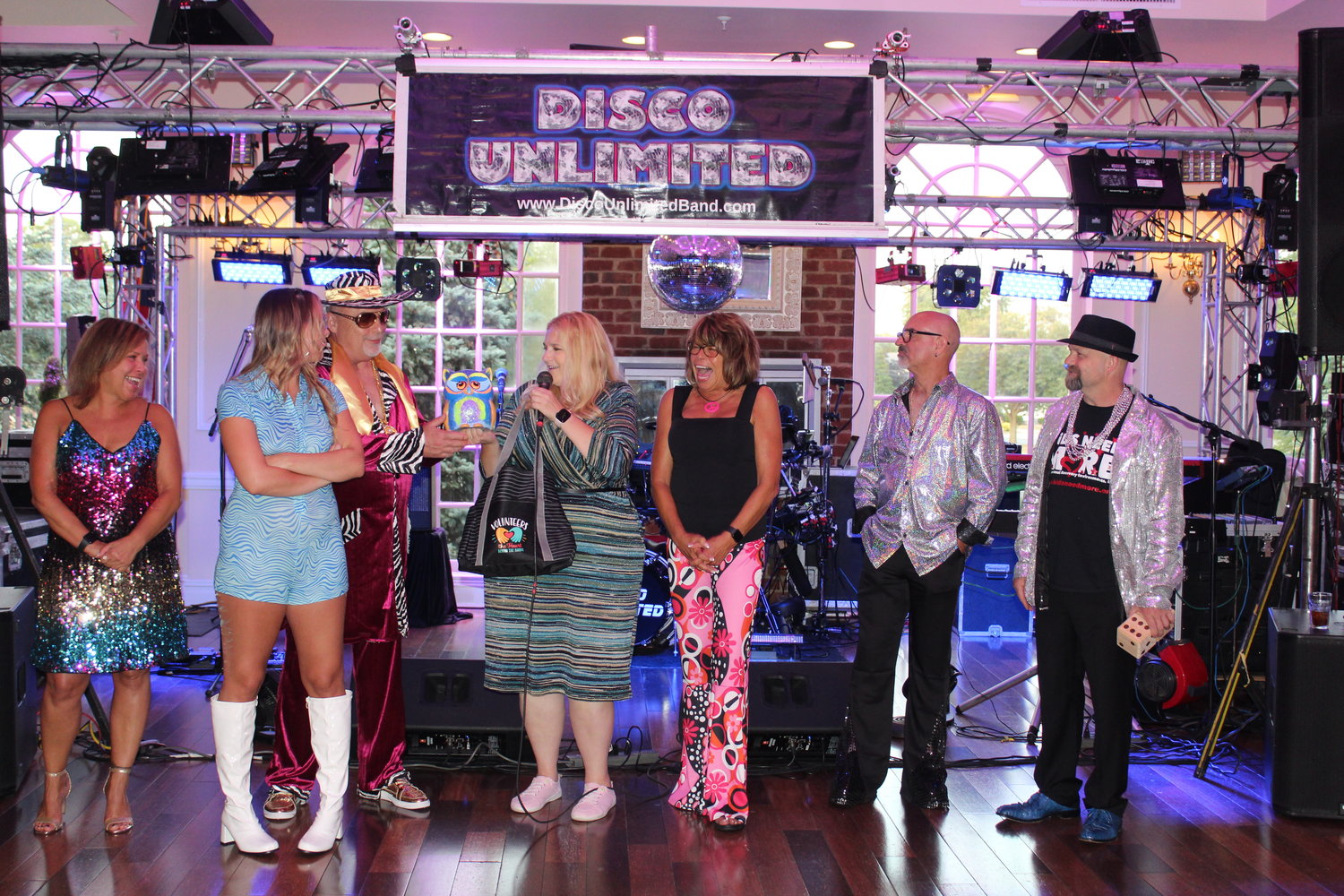 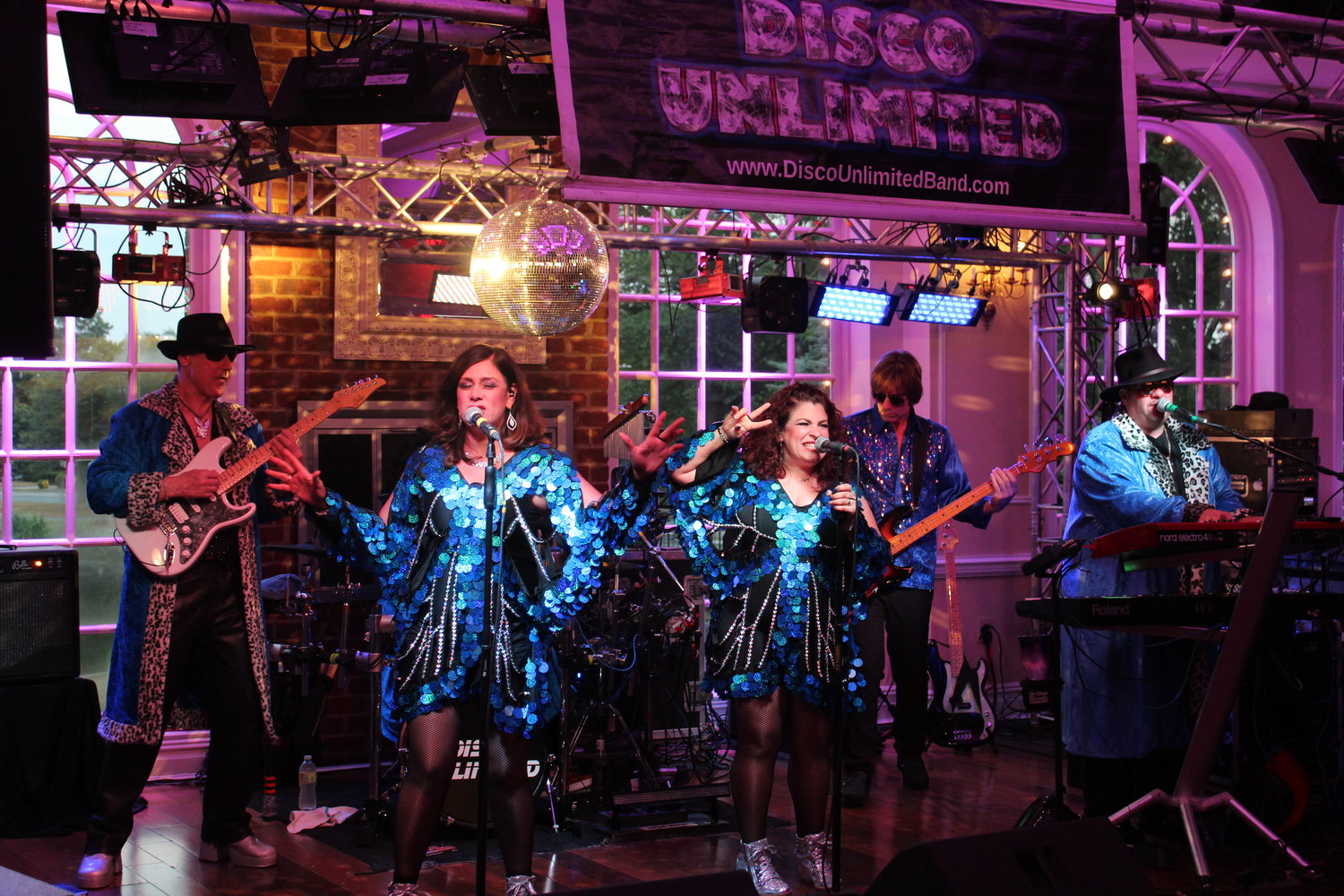 Kim Kraeling (in blue) took to the floor wearing iconic white platforms with her friends.
Karina Kovac/Herald
Previous Next
By Karina Kovac

Sequin-clad donors jived at the Coral House on the border of Baldwin and Freeport on Friday, July 29, to the disco-themed, sixth annual Mitchell Kraeling Memorial Gala. Hosted by Kraeling’s family and Kids Need More, a nonprofit organization dedicated to enhancing the lives of children, families and young adults coping with cancer and other life-threatening illnesses, the event featured live music by Disco Unlimited, disco balls, food, drinks, and games.

Mitchell Kraeling died in October 2013, at age 22, of Ewing’s sarcoma, a rare childhood cancer that occurs in the bones or soft tissue, and is diagnosed in roughly 200 children and young adults in the U.S. each year. Before his death, Mitchell’s younger sister, Kim, started attending a Kids Need More camp called Camp Adventure, on Shelter Island, and got to know other siblings of kids with cancer, which helped her cope with what her brother and family were experiencing.

The camp takes place in August, and matches trained volunteers with cancer patients and their siblings. Kim’s participation created a bond between the Kraeling family and Kids Need More President Melissa Firmes. “We were there for the family,” Firmes said, “and when Mitch” — Mitchell’s father, who shares his first name — “came to me and said that he wanted to start a fundraiser in his son’s name, it was a huge honor.”

Mitchell Kraeling addressed the gathering at the Coral House, and thanked Kids Need More for being part of his life when he was at his most vulnerable. “They were great for me during rough times in my life, with my son being sick,” he said. “They helped get me through all this, and you know losing my son was … words can’t describe. But I’m trying to keep his legacy going, his life going, and I just want to thank everybody who came here tonight.”

In the six years that the gala has been held, Kraeling has raised more than $200,000 for the Kids Need More Foundation. “It’s still hard for me — it brings up a lot of pain for me,” he said. “But I just want to give back. I want to keep my son’s memory alive. I try to educate people about what we do here, but a lot of people don’t understand unless they or someone they love has been touched by cancer.”

Samantha Bray has been interning at Kids Need More since January, as she works toward a degree in social work at Widener University in Pennsylvania. Bray explained that the camp is not limited to children with cancer, but rather is open to any kids “going through the tough stuff, things that kids aren’t supposed to go through.” The camp also hosts a range of community-based events, including a “holiday cheer bus” during the winter, and free movies. “Anything kids want to do,” Bray said cheerfully, “we do.”

“It just brings me so much joy,” Kraeling said, “These kids don’t want someone to stick a needle in their arm and do chemotherapy or radiation. They want to feel like a kid, which is why we set up these different events and the camp for them. It means so much to see the smiles on their faces.”

All proceeds from the gala will support the camp’s mission to help those going through tough times through fun events, either for themselves or their siblings. For more information on ways to donate or volunteer, go to KidsNeedMore.org.

Mohamed Farghaly contributed to this story.