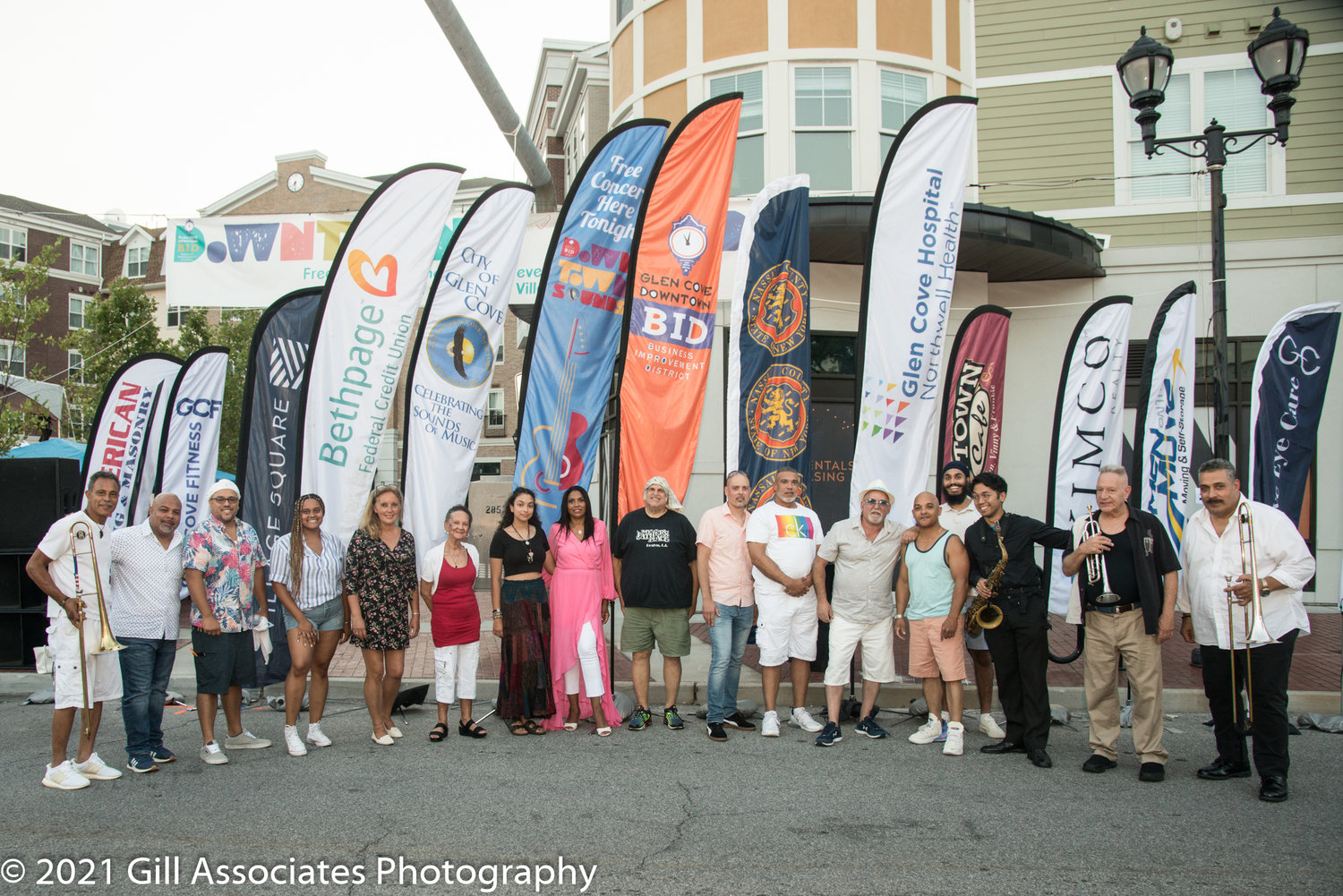 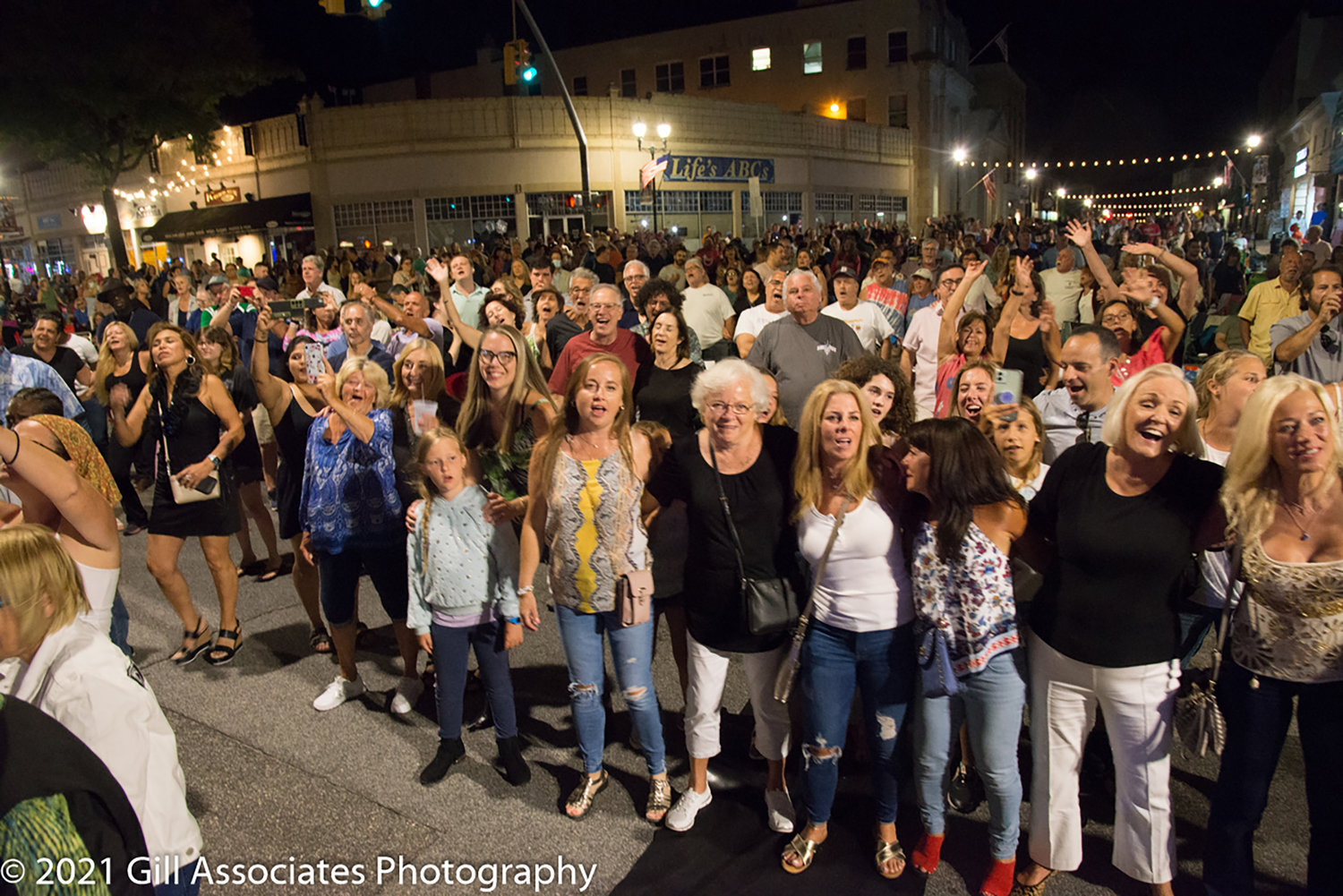 There were crowds of enthusiastic concertgoers at the Richie Cannata and Lords of 52nd Street concert in August 2021.
Previous Next
Line-up for Downtown Sounds 2022

a tribute to U2

Downtown Sounds has brought music, laughter, and family fun to Glen Cove for the past 25-years.

As part of the Glen Cove Business Improvement District’s plan to revitalize the city’s businesses, the Downtown Sounds initiative started in 1997 as a free concert series called Jazz in the Square, which was held every Friday in July. Hosted at the intersection of Glen and School streets, the concerts showcased local musicians and businesses.

“Our aim is to bring business to the downtown, and to give the restaurants and the shops business,” Fred Guarino, owner of Tikki Recording and Downtown Sounds chair said.

Throughout the years, the concert series grew with the help of sponsors. To accommodate the various musical preferences of the community and to attract a greater audience, the musical series evolved into Downtown Sounds, which was first coined by former BID executive director Francine Koehler.

“After a couple of years, I felt that it needed to appeal to a wider audience in order to grow,” Koehler explained.

The lineup for the concerts is confirmed by March each year. Motown, rock, country, tribute, and Hispanic artists have participated, with their own respective nights. The 2022 lineup includes bands such as Decade of Soul, Jesse Kinch, Strawberry Fields, Dancing Dream, and Milagro.

“We really tried to outdo ourselves with this lineup,” Patricia Holman, executive director of the BID, said. “And we're very proud of it.”

Holman’s daughter, Ava Solange, 16, said that she has found the crowd to be livelier over the years. “It really brings the whole community of Glen Cove together because everybody just comes for the sole purpose of enjoying music and dancing together,” Solange said.

After becoming a hit and partnering with Glen Cove City in 2010 under former mayor Ralph Suozzi, the concerts have been able to expand into Fridays in August as well. In the city partnership, Holman added, the BID still has full control of the concerts’ production.

Under Holman, the concert series has extended into a New Year’s concert. Starting this year, Holman created Downtown Teen Idol to allow aspiring teenage artists perform on stage at this year’s concerts.

“Every year we try to do a lot more or make it better than the prior year,” Holman said. “So, every year is a lesson about what we can do to make it bigger and better for our community and our visitors.”

“She tries to make it as inclusive as she can [and] something that people can enjoy,” Solange said about her mother’s plans.

By advertising on TV, radio, and newspapers, the concerts have been able to attract people outside of Glen Cove. “People love coming to it,” Guarino said. “And we've gotten out of towners coming, which is a wonderful thing because people coming from other towns means it has grown in appeal.”

Guarino said that he envisions Downtown Sounds growing bigger with the help of nationally recognized sponsors and artists joining one day. Even with the growing publicity and crowds, he added, there are no plans to move beyond the borders of the Downtown Village Square.

“We don't have the room to grow even bigger,” Guarino said. “Because we don't want to take it out of the downtown because our mission is to serve as the downtown community.”

Volunteers are essential in making the magic happen for every concert. Solange has been volunteering to work the concert since she was 11 years old.

By volunteering for the events to do the setup and cleanup, she has learned great leadership skills, she said. And sometimes her mom asks her for ideas and people at the concerts recognize her to ask for help.

“They know they can come up to us if you have a question and it’s something that has developed my life skills in a way and I really enjoy it,” Solange said.