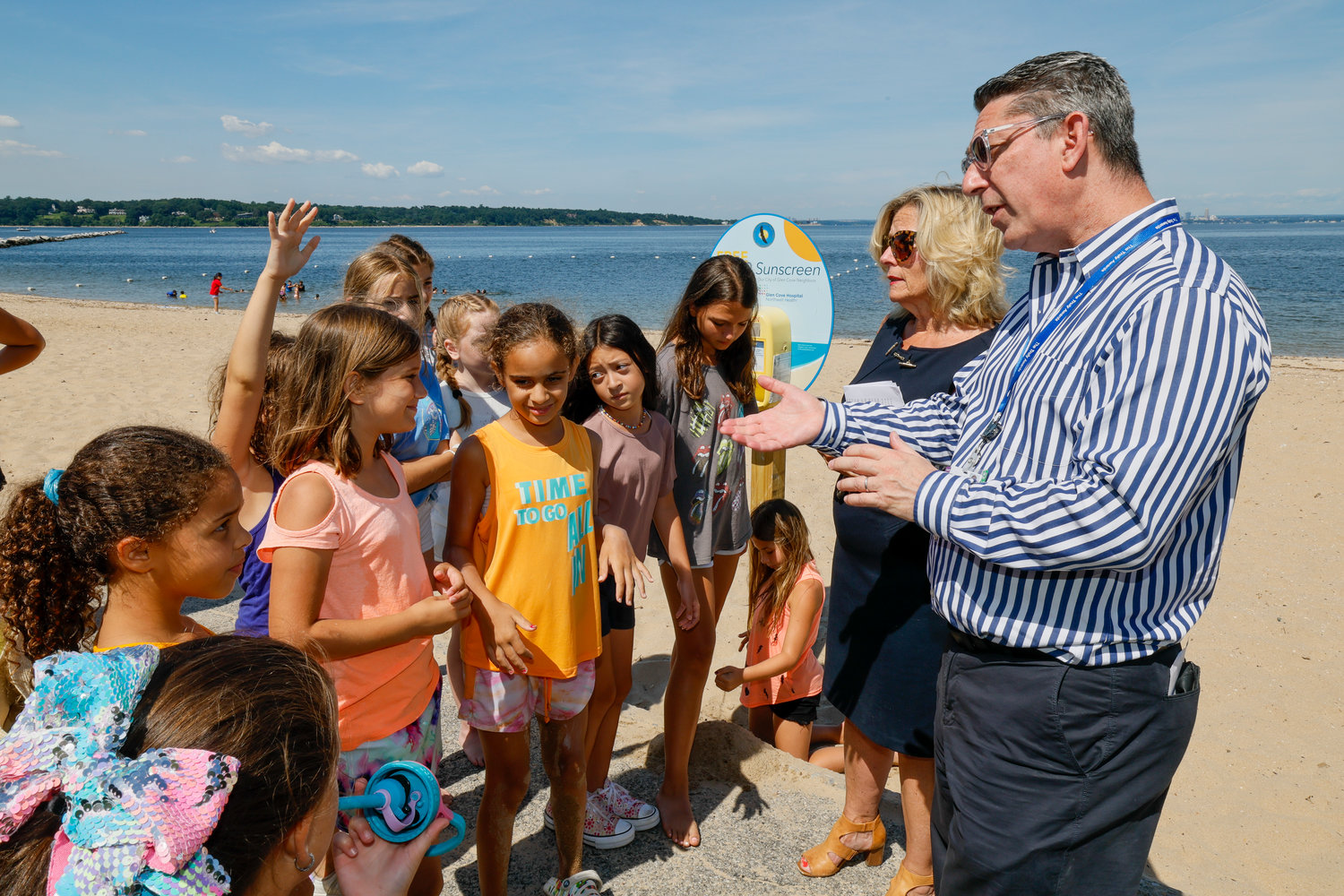 Mayor Pam Panzenbeck spoke to Glen Cove Youth Bureau summer campers about the city’s commitment to keeping its residents safe by having sunscreen dispensers in the parks. Then Dr. Brad Sherman, medical director and chair of the Department of Medicine at Glen Cove Hospital, explained to the campers why they should never forget to apply sunscreen.
Courtesy Northwell
Tips for preventing skin cancer

Sunscreen should be used from an early age.

Apply it even when it’s cloudy.

Use sunscreen with SPF 15 or higher.

Glen Cove is doing its part to protect its residents and visitors from skin cancer. Glen Cove Hospital has collaborated with the city to install sunscreen dispensers at several recreational facilities in the city, including Morgan Park, Pryibil and Crescent beaches, Stanco Park & Golf Course, and John Maccarone City Stadium.

“We are dedicated to the health and well-being of our communities,” Mayor Pam Panzenbeck said on July 27 at Morgan Park. “This sunscreen initiative is a vital step in keeping our skin protected and minimizing the risk of skin cancer.”

Dr. Brad Sherman, medical director and chair of the Department of Medicine at the hospital, joined Panzenbeck and summer campers from the Glen Cove Youth Bureau to discuss the advantages of using sunscreen regularly.

“When you put sunscreen on, it’s like putting on a coat in the wintertime,” Sherman said to the children. “It’s protecting us from getting sick, and it’s something we don’t realize. When it’s such a beautiful day, you want to run around and you want to be in the sun, but it’s important to put it on so that you don’t get sunburned.”

GCH recommends that skin be protected by incorporating sunscreen into one’s daily routine, even on cloudy days. Sherman explained that when children become sunburned, it can lead to skin cancer later in life. “It’s important for kids to know that,” he said.

Barbara Keber, vice chair of Family Medicine at the hospital, added that every sunburn increases the risk for skin cancer. And recurring sunburns invite bigger problems.

“Young adults are not generally looking for skin cancer on themselves, and don’t normally get evaluated unless they’re going for a physical,” Keber said. “It’s really, really important to prevent sunburn, and that’s really the role of sunscreen.”

Sherman said that doctors are finding a higher incidence of skin cancer, possibly caused by changes in the ozone and the atmosphere. Because the cancer can sometimes be hard to detect, Sherman advised going to a dermatologist or doctor at least once a year to have a skin check.

“Sometimes skin cancer can be really subtle,” he said. “If you have darker skin, for example, it’s very common to not necessarily see simple skin cancer cells like melanoma. Something that looks unusual in your skin that wasn’t there before, that looks discolored or an asymmetry, that’s something to be concerned with.”

The three main types of skin cancer are basal cell carcinoma, squamous cell carcinoma and melanoma. Melanoma, the most serious, spreads quickly and can be fatal — and it is not unusual in teenagers and young adults.

It’s important to start skin protection at a young age, by wearing a hat and long sleeves, when possible, and limiting exposure to direct sunlight between 10 a.m. and and 2 p.m., when the sun’s rays are most dangerous.

Keber said it’s important to reapply sunscreen every 45 to 60 minutes, particularly if you’ve gone swimming or are sweating. And sunscreen’s SPF, or sun protection factor, is also important, to a point.

“Once you go past 30 SPF, you probably don’t get much more prevention.” Keber said. “It’s really more about the reapplication rather than the level of SPF once you start to get up into those bigger numbers, so those higher grades aren’t worth the extra money.”

The hope was that the presentation at Morgan Park made an impression on the children, and that they will be more aware of how to protect themselves. “We want to make it a little fun, so that it’s part of what they do,” Sherman said. “As beautiful and fun as it is to be outside on a summer day, it can be dangerous to be exposed to the sun’s rays without having some protection.”