Freeport contending as playoffs near 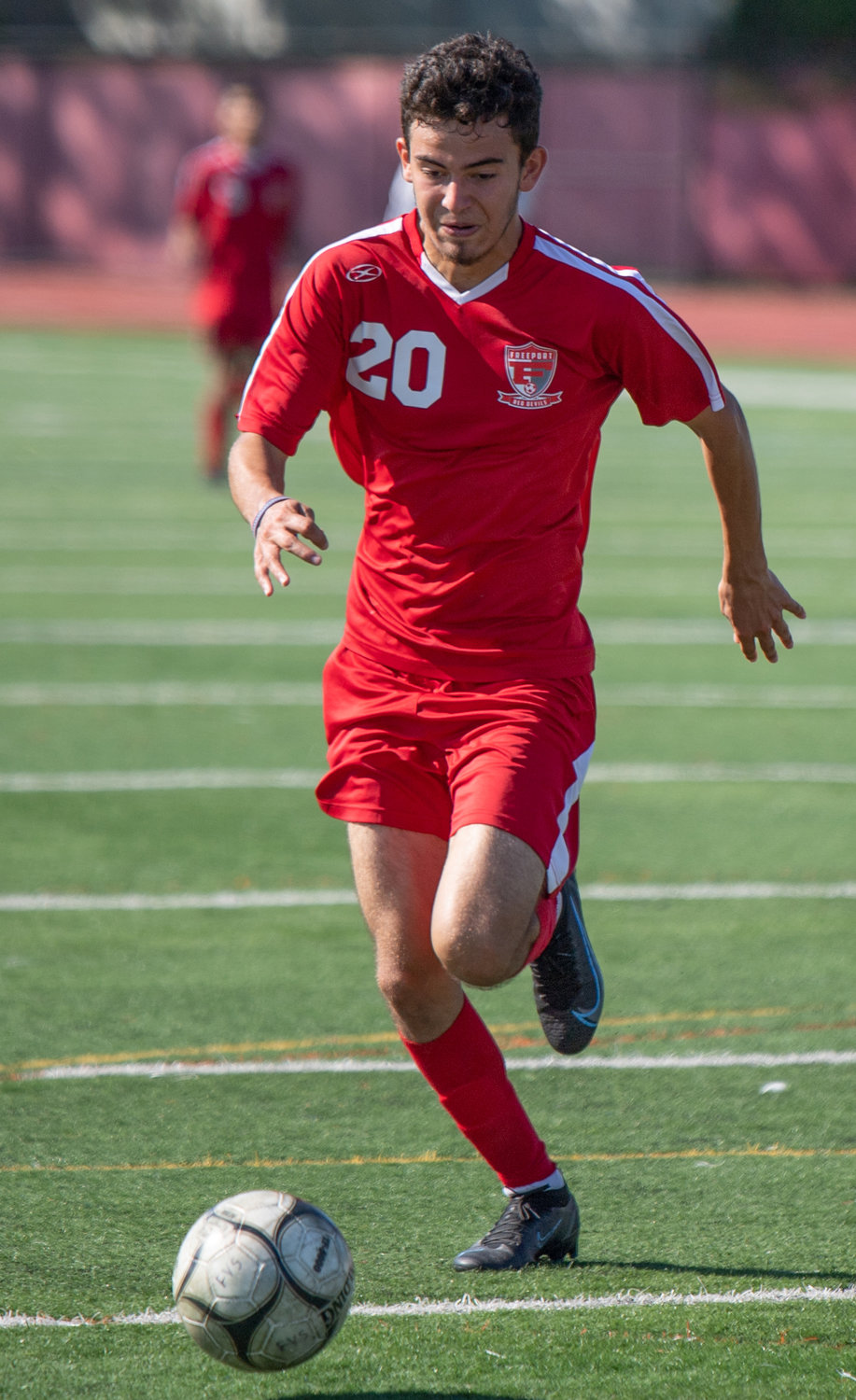 Josue Villeda (nine goals) is part of a prolific offense for the Red Devils, who are in the hunt for the Conference AA regular-season title.
Media Origin Inc./Herald
By Garrett D. Uribe

The underdog-beats-the-odds narrative had started to take a dark turn.
Though its boys’ soccer season began with an unprecedented run of success, Freeport’s September breakout was somehow sliding towards an October breakdown. Fresh off its first loss Sept. 28, which came on the heels of two ties, a frustrated Freeport – 4-1-2 at the time – had permitted Plainview to tie the score late as the Red Devils reeled towards another disappointment.
Enter guardrail Josue Villeda. The All-County senior striker took control, shutting the door with two tallies in the closing minutes to lift Freeport past Plainview 4-2 at home. The storybook authors wrote on.
At 8-2-2 in Conference AA, Freeport – which went a combined 8-10-5 in its past two campaigns – sits a half-game behind co-league leaders Oceanside (8-1-3) and Baldwin (8-1-4). Little more than a month ago, coach Craig Klasson, undertaking his third season, had never helmed a winning Red Devils squad – a condition which has now, with two games remaining at Herald press time, permanently ceased.
“It takes time to build a program, but with good support we’re now trending in the right direction,” said Klasson. “After our first loss we really needed a good rebound. The guys were able to squeeze out that win [over Plainview]. And we hoped that would set the tone for our remaining games.”


Villeda’s career-high nine goals make the Long Island Newsday Top 100 boys’ soccer player co-leader in AA alongside teammate Tyree Baskin, who set the team’s season high with four goals in an 8-2 win at Massapequa Oct. 4, and whose 18 points (nine goals, nine assists) are tops in AA, while All-Conference Red Devils midfielder Cesar Castro is second in league in both goals and assists, with eight and seven, respectively.
“The guys have great chemistry with the ball and are able to connect with one another and make us an offensive threat,” Klasson said. “That was our strategy going into the season, and it continues to be.”
A very possible point of failure starting the season has failed to materialize for Freeport. Playing his first year of high school soccer, senior goalkeeper Gilbert Rosario – a defector from Red Devils varsity football – is second in AA with 78 saves. “Gilbert has made crucial saves throughout the season to help us get where we are,” Klasson said. “He is powerful in the air and agile between the posts.”
Posting a .500 record in spring, Freeport made the Nassau Class AA quarterfinals, falling 6-3 to eventual runner-up Hicksville. With his club now in line for a prime postseason seeding, Klasson hopes Freeport’s breakthrough has legs heading into the playoffs. “We had confidence we’d be one of the top teams in the conference, being senior-heavy,” Klasson said. “With fourteen seniors, many who’ve been here three years, they feel this is their season of destiny.”
Klasson added: “But it will come down to their passion and grit in this late part of the season, and seeing where we finish in the standings. These final games should be interesting.”