A flag-raising that was all about Pride 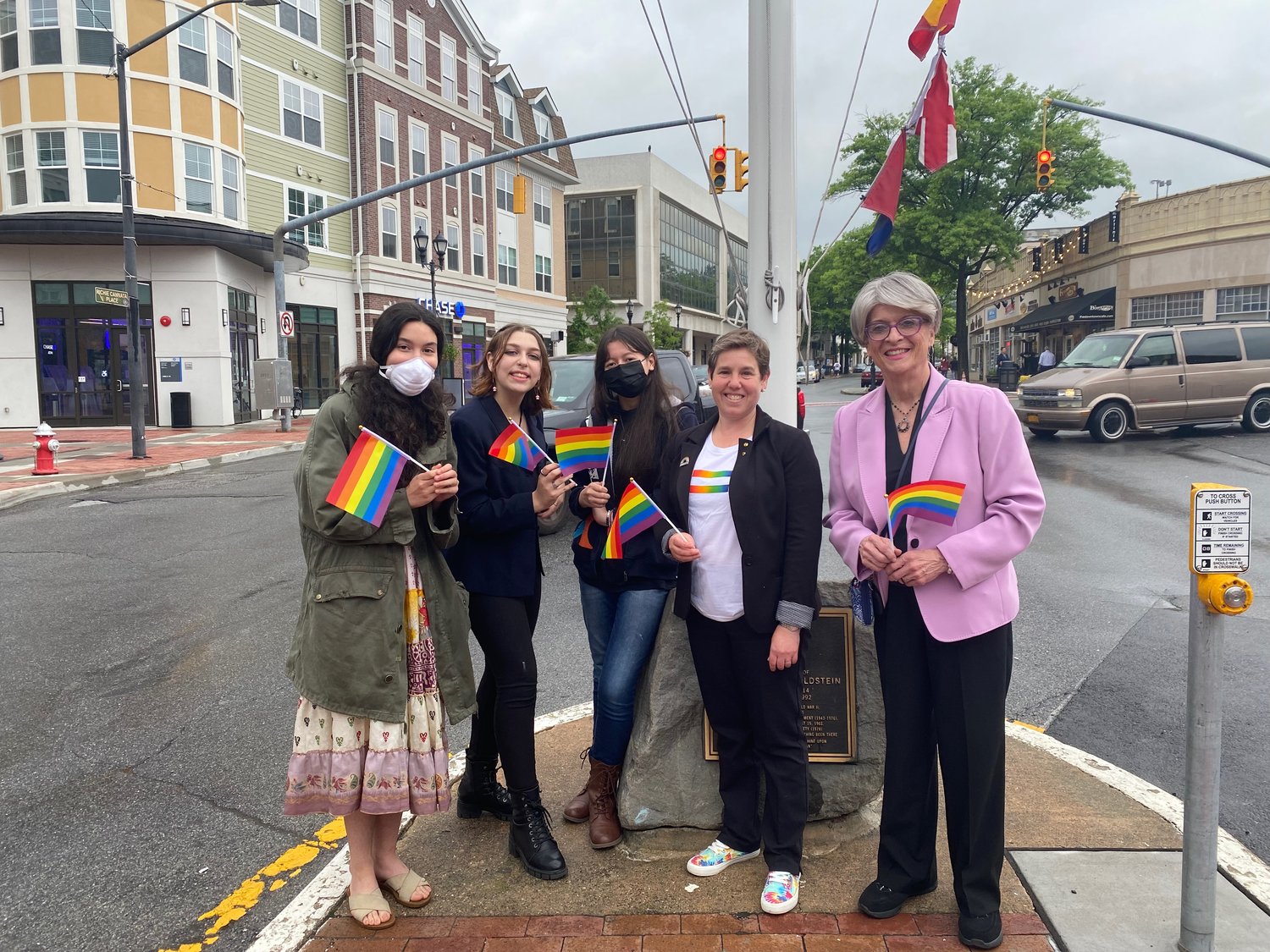 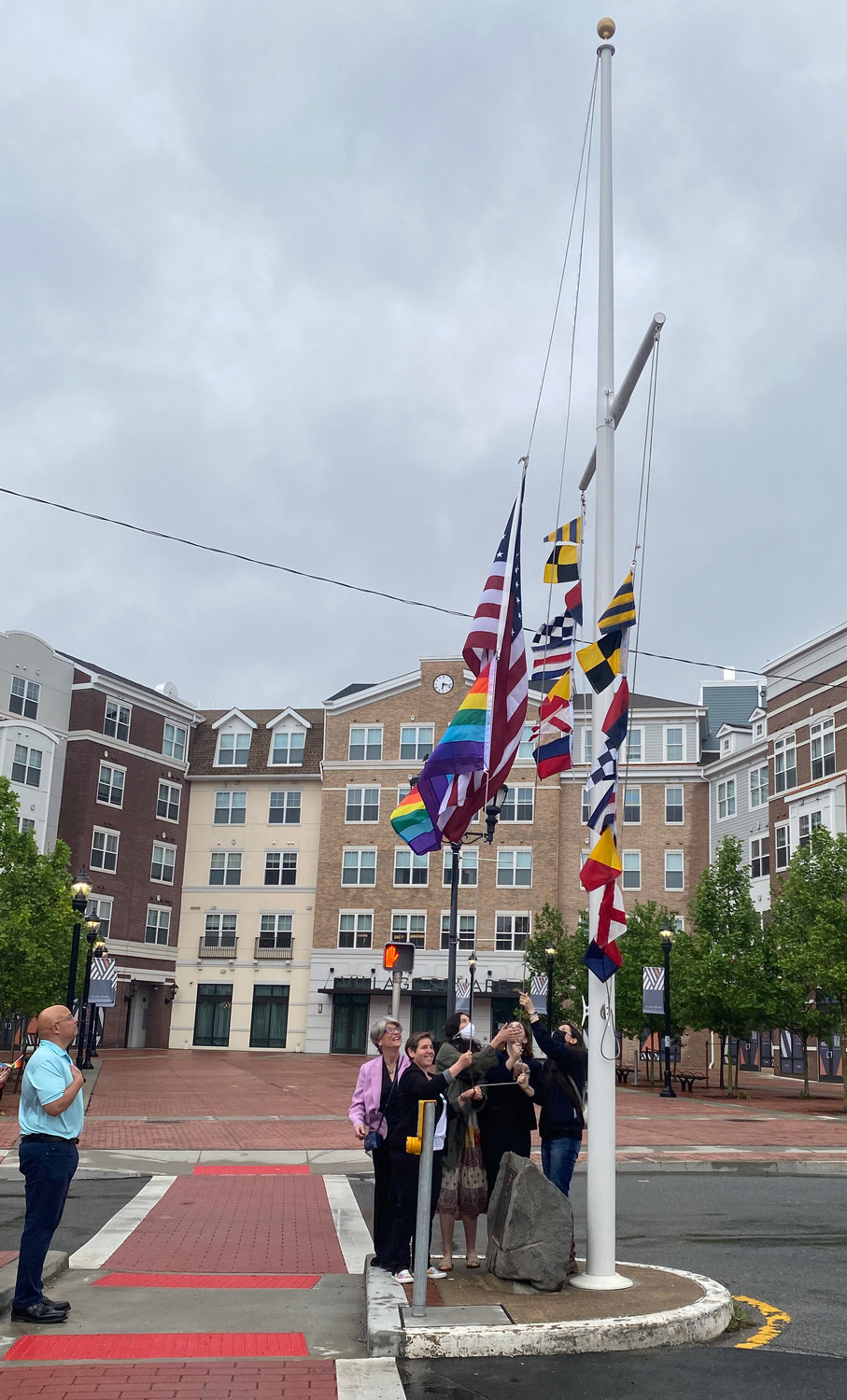 Councilwoman Silverman led the raising of the LGBTQ flag on School Street in Glen Cove.
Letisha Dass/ Herald
Previous Next

I hope that we have equality, not just for LGBTQ plus, but really for everybody.”
Councilwoman Marsha Silverman
By Letisha Dass

The lesbian, gay, bisexual, transgender and queer community continue to fight for their rights and acceptance in society every day. And LGBTQ youth, according to the New York Civil Liberties Union, continue to be bullied, overpoliced and targeted.

In 1999, during President Bill Clinton’s administration, June became known as Pride Month, in honor of the Stonewall riots in June 1969, a series of demonstrations in response to a police raid of Manhattan’s Stonewall Inn, a gay bar.

“I wish we didn’t have to celebrate,” Glen Cove City Councilwoman Marsha Silverman said. “I wish everybody could be treated equally. And I’m hopeful that someday we will all get there. I hope that we have equality, not just for LGBTQ plus, but really for everybody.”

In support of the community, Silverman organized the fourth annual Pride flag-raising downtown on June 2. She began the initiative in 2019 to spread awareness of the discrimination the LGBTQ community continues to face across the country and worldwide.

“We’ve come a long way from where we were even 20, 30, 40 years ago,” Silverman said. “And yet there’s so much more to go, and that’s across not just Glen Cove, that’s across the country, across the world.”

Representatives of Glen Cove High School’s Genders and Sexual Alliance were invited to the flag-raising. “I think it’s important to teach our youth not only that it’s OK to be who you are,” Silverman said, “but also, to fight for what’s right for others.”

Because of a downpour, the ceremony, at which there were roughly 50 guests, began in City Hall. Sarah Yates, a Glen Cove High senior and the president of GSA, and Elle Woska, a junior and the organization’s vice president, said they were thankful for the support.

“It’s really powerful to have something that everyone can see,” Woska said of the Pride flag, “because a lot of times, people of the LGBTQ community are passed over and just looked over as just other people.”

After the storm cleared, the participants made their way to the flagpole on School Street for the raising of the flag. Neighbors who drove by waved from their cars in support.

“Raising this flag can further our journey as a community to help others be more comfortable in the environment,” Yates said.

Juli Grey-Owens, executive director of Gender Equality New York, was the event’s keynote speaker. “When a city stops to raise the Pride flag, it’s an opportunity to say, hey, we support that organization,” she said, “and make people aware of the fact that we are part of the community as well.”

Grey-Owens added that Pride Month is about more than commemorating the achievements of the community. “We must understand that Pride is more than a celebration,” she said. “It’s time to commit, refocus and prepare for our next vows, to make our country and our state a safer [and] just place to live.”

The flag-raising is a key factor in combating discrimination with awareness and understanding, Silverman said. “It’s more about education and bringing the community together,” she said. “And although we have differences, it’s to remember how much we all have in common.”

According to the Trevor Project, because of their stigmatization, LGBTQ young people are four times more likely to commit suicide than their peers, and at least one attempts suicide every 45 seconds.

It wasn’t until January 2019 that the State Legislature amended the state’s Human Rights Law of 1945 to add gender identity and expression as a protected category against discriminatory behavior in employment, housing, public places and non-religious schools.

“That means prior to January 2019,” Grey-Owens said, “it was basically legal to refuse a transgender or gender nonbinary person service in a restaurant, or a ride in a taxicab.”

She said that there should be stronger support for the transgender and nonbinary community, which has declined in recent years. She asked that the community consider raising a transgender flag as well in honor of Transgender Visibility Day, March 31, and, Transgender Day of Remembrance, Nov. 20, to increase “visibility, self-affirmation, dignity and the fight for equality” that her community needs.

“LGBTQ people still do not have civil rights in 29 states,” Grey-Owens said. “So our work continues.”